Swyddffynon is a small village, which lies about a mile south of Ystradmeurig. The War Memorial stands outside the corner of the school playground in Swyddffynon, overlooking the cross-roads. The memorial takes the form of a polished red granite cenotaph, and was unveiled in October 1920 in the presence of the Earl of Lisburne, who commanded No 2 Company, Welsh Guards during the war. The memorial was supplied by Henry Jones of Tregaron. I do not presently have close-up photographs of the names on this memorial, so anything would be most appreciated. 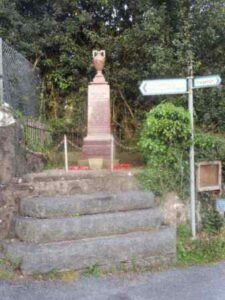 George Thomas Jenkins, Private, PS/10107, Royal Fusiliers. George was the son of John and Catherine Jenkins, of The Shop, Swyddffynon. He served with the 9th (Service) Battalion, Royal Fusiliers which was formed at Hounslow on 21 August 1914, attached to 36 Brigade, 12th (Eastern) Division. The Division landed at Boulogne on 31 May 1915, and took over the line at Ploegsteert Wood. They then moved south in September and fought in the Battle of Loos, and the subsequent actions of the Hohenzollern Redoubt, and remained there until March 1916. By June they were in position at the Somme, and attacked Ovillers on 2 July 1916. On 4 August 1916 the battalion was at Pozières, their objective was the German position known as Ration Trench. At 9.15 pm in the evening the Fusiliers left their trenches and moved over open ground behind a creeping barrage towards the German line. The attack on the left flank was successful, but on the right the advance was met by stiff enemy resistance, and Ration Trench was not taken until the afternoon of the following day. George was killed in action during the initial assault on 4 August 1916. He was 21 years old, and is commemorated on the Thiepval Memorial, France. On the evening of 5 August, the 9th Royal Fusiliers were counter attacked with bombs and flamethrowers, and during the ensuing action, the Welsh international and Aberystwyth goalkeeper, Leigh Richmond Roose, was awarded the Military Medal for bravery. 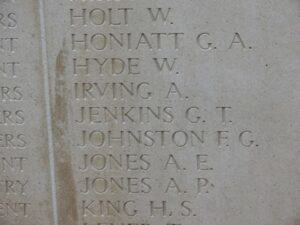 David Rowland Jones, Private, 55559, Royal Welsh Fusiliers. David was the son of John and Annie Jones, of Dolfawr, Ystradmeurig. He enlisted on 11 December 1915 into the Royal Welsh Fusiliers, and was mobilised on 7 April 1916, joining the 2nd Battalion, Royal Welsh Fusiliers. The battalion was attached to 19 Brigade, 33rd Division, and David joined them in time to take part in the Battle of the Somme. They then fought during 1917 at the Battle of the Scarpe and at Bullecourt, before heading to Ypres, and fighting at the Menin Road and at Polygon Wood. On 6 February 1918, the battalion was transferred to 115 Brigade, 38th (Welsh) Division, and moved with the Division to the Somme, where it took up positions north of Albert, overlooking the Ancre Valley. On 21 August 1918 the Division made its famous crossing of the River Ancre, and began its drive towards the Hindenburg Line. On 1 September 1918 David was shot in the arm, whilst the Division was fighting near Bapaume, and was treated at 59 Casualty Clearing Station, before being evacuated to 48 General Hospital, then invalided home. He was discharged from the army on 7 December 1918, but died at home on 23 September 1919 as a result of his wounds. David was 32 years old, and is buried at Strata Florida (St. Mary) Churchyard.

Evan Jones, Stoker, K/53294, Royal Navy. Evan was born at Ystradmeurig on 8 December 1893. He served with the Royal Navy, based at H.M.S. Vivid, the Naval Base at Plymouth. Evan became ill, and died of pneumonia at Devonport on 17 September 1918, aged 24. He is buried at Swansea (Danygraig) Cemetery. His widow Violet later remarried, becoming Violet White (formerly Jones), of 5, Council Houses, Ashburnham Road, Pembrey, Carmarthenshire. Many thanks to Bev Lewis for the photograph of Evan’s grave. 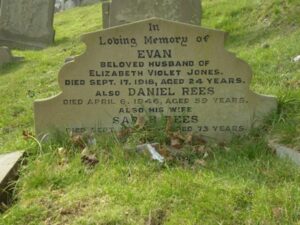 John Idwal Jones, Private, PS/10109, Royal Fusiliers. Idwal was born in 1894, in Well House, Swyddffynnon, Cardiganshire, the son of Joseph and Martha Jones. He enlisted at Lampeter into the army, and was posted to France at some time in 1916, joining the 9th Battalion, Royal Fusiliers, which was attached to 36 Brigade, 12th (Eastern) Division. By June the Division was in position at the Somme, and attacked Ovillers on 2 July. They fought at Pozières and Le Transloy before being moved to the Arras area during October 1916, where they fought in the March 1917 Battle of Arras, taking part in the First Battle of the Scarpe, and the Battle of Arleux. They then fought at the Third Battle of the Scarpe, and helped capture Rouex. The Division remained at Arras until taking part in the Battle of Cambrai in November 1917. After initial successes, the Germans counter-attacked on 30 November, and the 9th Royal Fusiliers were caught up in terrible fighting in trenches south of the Gouzeaucourt-Cambrai road. During that mornings fighting the 9th had lost 13 officers and 208 other ranks killed. Idwal was amongst those men killed at Cambrai on 30 November 1917. He was 23 years old, and is commemorated on the Cambrai Memorial, Louverval, France. The photograph of Idwal is courtesy of his family. 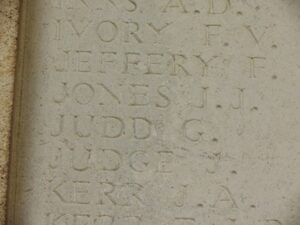 Noel Osborne-Jones, Second Lieutenant, Royal Welsh Fusiliers. Noel was the son of Robert and Ada Mason Osborne-Jones, of Brynawelon, Ystradmeurig. He was commissioned into the 15th Battalion, Royal Welsh Fusiliers on 14 May 1915. The battalion was attached to 113 Brigade, 38th (Welsh) Division. The Division had landed in France during December 1915 and had spent their first winter in the trenches near Armentieres. It moved to the hated Givenchy sector during February 1916, a sector renowned and feared for its underground mining activities. Noel was killed whilst leading a midnight bombing raid on 8 May 1916. He was 21 years old, and is commemorated on the Loos Memorial, France. 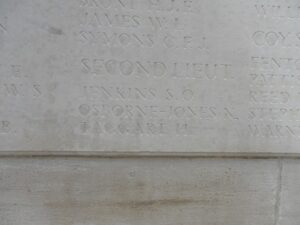 Rhys Williams, Private, PS/8687, Royal Fusiliers. Rhys was the son of the late Jenkin and Margaret Williams, of Blaenyrorfa, Tyngraig, Ystradmeurig. He was a Divinity student prior to the war, and enlisted at Aberystwyth into the army. Rhys was posted to the 24th Battalion, Royal Fusiliers, which was known as the 2nd Sportsmans battalion, and landed at Boulogne in November 1915. On 13 December 1915 the battalion transferred to 5 Brigade, 2nd Division, and moved to the Bluff Sector, near Ypres. During the summer of 1916 the division moved south to the Somme, taking part in the Battle of Delville Wood. During the latter stages of the Somme, the division took part in the Battle of the Ancre, and it was here that Rhys was killed on 13 November 1916. He was 20 years old, and is commemorated on the Thiepval Memorial, France. 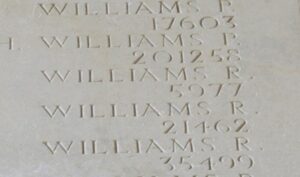