Silian is a village in the Aeron valley, situated about two miles north-west of Lampeter, on a minor road which links Pont Creuddun on the A482, and Glan Denys on the A485. The name of the village originates from Saint Sulien, to whom the village church is dedicated. Silian is also home to Bethel Chapel, which houses an individual marble plaque which commemorates the one member of its congregation, Watkin Jones Davies, who fell during the Great War. St. Sulien’s Church also contains a marble memorial to one parishioner, Thomas Parry, who fell during the First World War, and another to the villagers who served during the Second World War, all of whom, fortuitously survived. The latter memorial used to be located in the village school but was relocated after its closure. The photographs of two of the memorials have been kindly supplied by Jennifer Cairns, while the photograph of the memorial to Thomas Parry has been supplied by Eirian Jones. 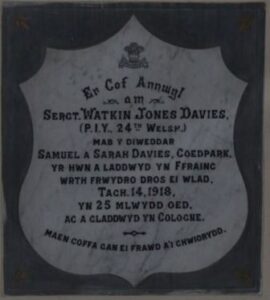 Watkin Jones Davies, Sergeant, 320198, Welsh Regiment. Watkin was the son of Samuel Sarah Davies, of Coedpark, Lampeter. He originally enlisted at Lampeter into the Pembroke Yeomanry prior to the war. During March 1916 the 1/1st Pembroke Yeomanry moved to Egypt, where it merged with the Welsh Border Mounted Brigade and formed the 4th Dismounted Brigade. On 2 February 1917 it merged with the 1/1st Glamorgan Yeomanry to form the 24th Battalion, Welsh Regiment, and became attached to 231 Brigade, 74th (Yeomanry) Division. The Division had formed in Egypt in January 1917 and had fought through the Palestinian Campaign, at the Battles of Gaza and the Battle and capture of Jerusalem. Due to the terrible casualties suffered by the British on the Western Front in March and April 1918 the Division was recalled to the Western Front, and arrived at Marseilles during May 1918. They then fought at the Second Battle of Bapaume during the great offensive, and fought in Flanders before returning to the Somme and fighting at the Battle of Épehy, as part of the offensive towards the Hindenburg Line. Watkin was captured by the Germans at Épehy, and died of wounds in captivity on 21 September 1918. He was 25 years old, and is buried at Cologne Southern Cemetery, Germany. The photograph of Watkin is courtesy of Elin Jones, A.M. 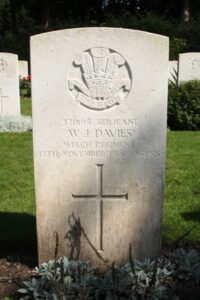 Thomas Parry, Private, 15668, Royal Irish Fusiliers. Thomas was the son of Thomas and Gwenllian Parry, of Ffinant Cottage, Silian, Lampeter. He worked as a miner at Mardy prior to the war and enlisted there into the army, before being posted to the 6th Battalion, Royal Irish Fusiliers, probably along with a number of other miners from the valleys, of whom many were Irish. The battalion was attached to 31 Brigade, 10th (Irish) Division and embarked at Plymouth aboard the SS Canada on 13 July 1915 for service in the Mediterranean. On 7 August the battalion landed and advanced to occupy trenches on Hill 53. After spending the first days on the peninsula in support, on 15 August the 6th Royal Irish Fusiliers became involved in heavy fighting against the Turks on Kiretch Tepe Ridge. Thomas was killed here at some time during the day. He was 36 years old and is commemorated on the Helles Memorial, Gallipoli. His brother Evan was awarded the Military Medal for bravery in the field at Pilckem Ridge while serving with the 15th Welsh (Carmarthen Pals) in 1917. 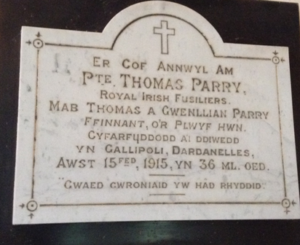 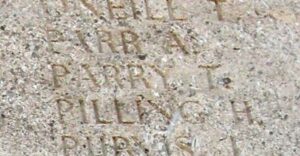 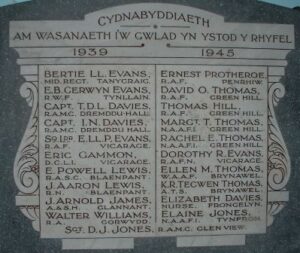