Rhydlewis is a small village situated on the B4334 road, about five miles north-north-east of Newcastle Emlyn. About a quarter of a mile south of the village lies Hawen Chapel, inside of which are two individual memorials to men who died in both world wars. The original photos of these memorials were kindly supplied by Mike Berrell, with the location as being Rhydowen, but Ray Jones has recently informed me that the chapel is in fact in this location. Rhydowen is a small village situated on the A475 road mid-way between Newcastle Emlyn and Lampeter, on the cross-roads where the B4459 from Pencader to New Quay bisects it. The men of the area who fell during both World Wars are commemorated on two plaques, which are located inside Hawen Congregational Chapel. Many thanks to Mike Berrell for the photographs of the memorials. 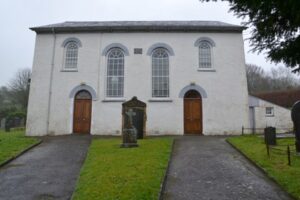 Rhys Davies, Private, 33009, South Wales Borderers. Rhys was the son of John and Mary Davies, of Penffos, Rhydlewis. He enlisted at Colwyn Bay into the South Wales Borderers, and was posted to France, joining the 1st Battalion, South Wales Borderers, which was attached to 3 Brigade, 1st Division. The Division had been in France since the outbreak of war, and had fought in the retreat from Mons, before moving to Ypres, fighting at the First and Second Battles of Ypres. In September 1915 the Division took part in the Battle of Loos, and in the summer of 1916 fought on the Somme. Rhys probably joined the battalion in time for the Somme offensive. They followed the German retreat to the Hindenburg Line in early 1917, and were then briefed for an operation on the Flanders Coast, and moved there during the summer of 1917. While training on the coast, the Battle of Third Ypres had stalled in the mire, and the Division were recalled to Ypres, where they fought at the Second Battle of Passchendaele. After spending another winter in Flanders, they were near Estaires when the German Spring Offensive caught them, and saw heavy fighting over the coming weeks. Rhys was wounded during the relatively calm period after the German offensive had died down. He died of his wounds on 23 July 1918, aged 20, and is buried at Pernes British Cemetery, France. 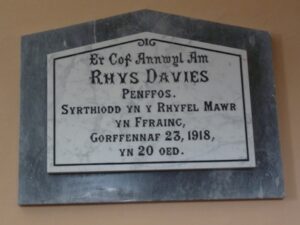 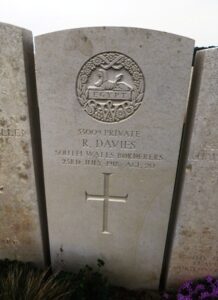 David Owens, Seaman, J/50438, Royal Navy. David was born on 7 April 1895, the son of David and Annie Owens, of Wenallt, Brongest, Newcastle Emlyn. He enlisted on 24 February 1916 into the Royal Navy. After training at HMS Vivid he was posted aboard HMS Victorian, an armed merchant ship, which patrolled the North Sea. David survived the war but died at home from Phthisis on 1 February 1921, aged 25. He is buried at Hawen Congregational Chapelyard. David does not seem to be commemorated locally. 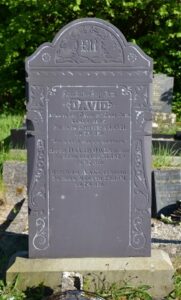 David Joshua Lloyd Davies, Fusilier, 7046611, Royal Irish Fusiliers. David was the son of Evan Arthur and Elizabeth Davies, of Gwalia, Rhydlewis. He served with the 1st Battalion, Royal Irish Fusiliers, which was attached to the 38th Irish Infantry Brigade. The brigade served in the North African campaign. David was killed in Tunisia, during the Battle of the Kasserine Pass, on 20 February 1943. He was 29 years old, and is commemorated on the Medjez-El-Bab Memorial, Tunisia. 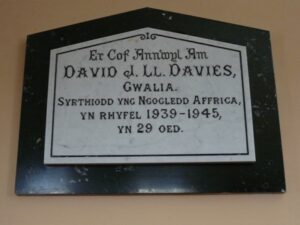