Pontsian is a rural village which lies on the banks of the river Clettwr, a tributary to the River Teifi, on the B4459 road to New Quay, about nine miles west of Lampeter, and five miles north of Lampeter. There are three separate war memorials in Pontsian, one at Capel Llwynrhydowen, and two at Eglwys Sant Ioan. The memorials commemorate the three men from the village who fell during the Great War. The photographs of the memorials were kindly supplied by Mike Berrell. 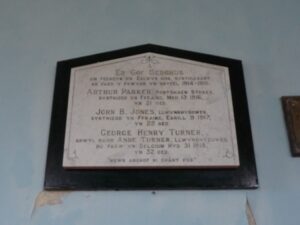 John Benjamin Jones, Private, 5539, Royal Fusiliers. John was the son of Thomas and Elizabeth Jones, of Llwynrhydowen, Llandyssul. He lived in Marylebone prior to the war, and enlisted at London into the 9th Battalion, Royal Fusiliers. They formed part of 36 Brigade, 12th (Eastern) Division, and landed at Boulogne on 31 May 1915, taking over the line at Ploegsteert Wood. They then moved south and fought in the Battle of Loos, and remained there until March 1916. By June 1916 they were in position at the Somme, and attacked Ovillers on 2 July 1916. They fought at Pozières and Le Transloy before being moved to the Arras area, where they fought in the March 1917 Battle of Arras. John was killed in action here, during the Battle of the Scarpe, on 9 April 1917. He was 22 years old, and is buried at Ste. Catherine British Cemetery, France. 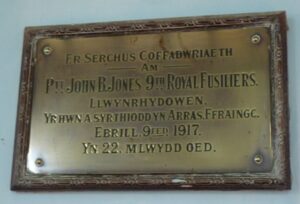 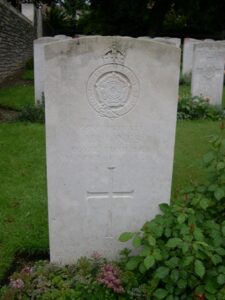 Arthur Parker, Private, 420894, Canadian Infantry. Arthur was born on 1 May 1895, the son of Mrs. Mary Parker of London, and was the husband of Fanny Parker (Later Fanny Coote, 26, Marlboro Buildings, Bath). Prior to the war Arthur had resided at Pontshan Stores, Llandyssul, and had emigrated to Canada. He enlisted at Winnipeg on 29 December 1914, and was posted to the 16th Battalion (Manitoba), Canadian Infantry, who were attached to 3 Brigade, 1st Canadian Division. The Division arrived in Britain on 14 October 1914 and moved on to France in February 1915, moving to Ypres. Here they fought at the Battle of Gravenstafel in April, and faced the first German Gas Attacks that month, saving the line at St. Julien, when the French Colonials holding the line were hit by the first poison gas attack of the war, and fled. In May they fought at the Battle of Festubert, and in June at Givenchy. In June 1916 the Canadian Corps assaulted the German positions on Mount Sorrel, which is where Arthur was killed on 13 June 1916. He was just 21 years old, and is buried at Railway Dugouts Burial Ground, Belgium. 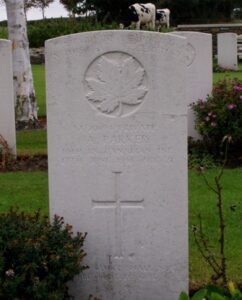 George Henry Turner, Rifleman, 897117, London Regiment. George was born at Guildford, the son of George and Elizabeth Turner, of 6, Loxford Avenue, East Ham. George had moved to Llandyssul, and married Annie Turner, of Llwyn Cottage, Pontshaen, Llandyssul. He returned to London to enlist at East Ham, into the Middlesex Regiment, but later transferred into the 34th Battalion, London Regiment, which was attached to 49 Brigade, 16th (Irish) Division. In December 1915 the Division moved to France, and saw its first major action during the 1916 Somme Offensive, at the Battles of Guillemont and Ginchy. They then moved to positions south of Ypres, and fought in the 1917 Battle of Messines, and then at Langemarck during Third Ypres. In 1918 they were in positions near St. Quentin when the German Spring Offensive was launched on 21 March 1918, and fought at the Battles of St. Quentin and Rosieres. On 18 June 1918 after suffering heavy casualties, the Division moved to England to rebuild, and on 1 August 1918 returned to France. They then fought in the great offensive which was to bring an end to the Great War, and George was wounded during the Final Advance in Artois. He died of wounds on 31 October 1918, aged 32, and was buried at Don Communal Cemetery, Annoeullin, France. 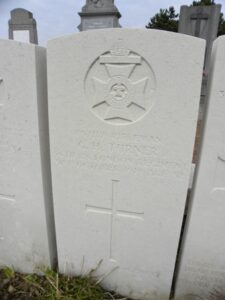