Penrhiwllan is a small village situated on the A475, approximately four and a half miles east of Newcastle Emlyn, near Aberbanc. One of several war memorials to be found locally, inside Gwernllwyn Welsh Independent Chapel is a marble memorial plaque, which commemorates its seven members who fell during the Great War. Many thanks to Huw Davies for the copies of the portraits of the men, and to Ray Jones for the photographs of the memorial. 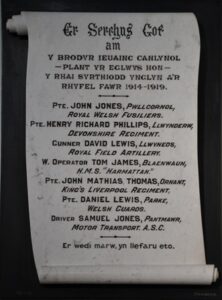 Thomas James, Wireless Operator, Mercantile Marine. Thomas was the son of John and Margaret James, of Blaenwaun, Henllan. He was educated at Emlyn Grammar School, before working for Marconi, and served as a Wireless Operator with the Mercantile Marine, aboard the SS Harmattan, a London registered steamer. On 5 May 1917, Harmattan was on route from Avonmouth with a cargo of Government Stores, when she struck a mine off Algeria, which had been laid by the German submarine UC-37. Thomas was among 36 of her crew who died that day. He was 19 years old, and is commemorated on the Tower Hill Memorial, London.

John Jones, Private, 12902, Royal Welsh Fusiliers. John was the son of Mrs. Anne Jones, of Pwllcornol Isaf, Penrhiwllan. He enlisted at Ammanford into the 9th Battalion, Royal Welsh Fusiliers, which was attached to 58 Brigade, 19th (Western) Division. John landed in France with the battalion on 19 July 1915, and moved to positions near Festubert, where it was initiated into trench warfare. The Division took part in the opening attack of the Battle of Loos on 25 September 1915. John became one of hundreds of men of the 19th Division killed that day, during a futile diversionary attack near Festubert. He was 22 years old, and is commemorated on the Loos Memorial, France. 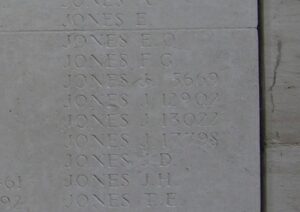 Samuel Jones, Private, M/5422, Royal Army Service Corps. Samuel was born at Penrhiwllan in 1890, the son of John and Ann Jones. Prior to the war he resided with his wife, Minnie L. M. Jones, at Brynivor, Horeb, Llandyssul. Samuel had been an early enlistee into the army, and had landed in France on 7 October 1914, serving with the Army Service Corps. He served in France for the duration of the war, but died  in hospital at Chester, soon after demobilisation, on 7 March 1919. Samuel was 29 years old, and is buried at Gwernllwyn Congregational Chapelyard. 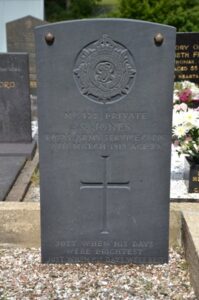 Daniel Lewis, Guardsman, 3446, Welsh Guards. Daniel was the son of Joshua and Ann Lewis, of Parke, Henllan. He enlisted at Aberystwyth into the Welsh Guards, which had been raised by Royal Warrant of 26 February 1915, at White City. On 18 August 1915 the Welsh Guards landed in France, and became attached to 3rd Guards Brigade, Guards Division. The Division fought at Loos in September 1915, and the following year saw them in action at Ypres and on the Somme. In 1917 they fought at Third Ypres, and the Battle of Cambrai. They remained in the area over the final winter of the war, and were stationed near Gouzeaucourt when the German Spring Offensive hit the area on 21 March 1918. The British retreated in the face of this onslaught, suffering severe casualties. After several weeks of intense fighting, the German Offensive petered out on the Somme, and after several months of stalemate, on 8 August 1918 an impressive victory around the town of Villers Brettoneux turned the war. On 21 August 1918 the British launched an attack on the Somme, and the Guards Division fought at the Battle of Albert, and pushed east, fighting at the Battle of Bapaume. From here on the Allies had the upper hand, and moved towards the Hindenburg Line, where the Guards Division fought at the Battle of Havrincourt and the Battle of the Canal du Nord. Once the Hindenburg Line had been broken, the Allies swept eastwards over territory that had been occupied by the Germans for four long years. The Guards fought at the Battle of Cambrai, and pushed north-eastwards towards the Forest of Mormal. Daniel was killed during the Battle of the Sambre, on 2 November 1918. He was 37 years old, and is buried at Poix-Du-Nord Communal Cemetery Extension, France. 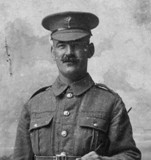 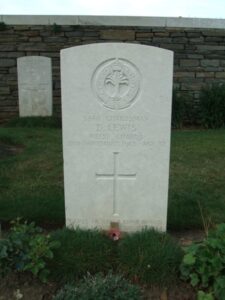 David Lewis, Gunner, 116821, Royal Field Artillery. David was the son of David and Sarah Lewis, and the brother of E. Lewis, of Llwyneos, Penrhiwllan. He enlisted at Lampeter into the Royal Field Artillery, and was posted to France during 1916 , where he joined the 84th Battery, 11th Brigade, Royal Field Artillery, which was attached to the Fourth Army. David was at Ypres in the summer of 1917, and had been attached to the Labour Corps, when he was wounded during the Battle of Polygon Wood. He was evacuated to the Casualty Clearing Station near Poperinghe, where he died of his wounds on 26 September 1917. David was 23 years old, and is buried at Dozinghem Military Cemetery, Belgium. 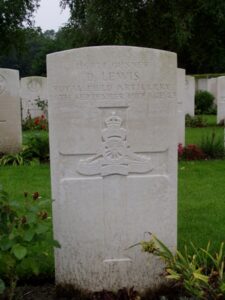 Henry Richard Phillips, Private, 14168, Devonshire Regiment. Henry was the son of George and Hannah Phillips, of Llwyngwair, Penrhiwllan. He enlisted at Honiton into the Devonshire Regiment on 3 September 1914, and after training was posted to France on 2 April 1915, where he joined the 1st Battalion, Devonshire Regiment. The battalion was by then attached to 14 Brigade, 5th Division, and fought at Second Ypres in April 1915. On 12 January 1916 the battalion transferred to 95 Brigade, in the same Division, and in July 1916 took part in the opening of the Battle of the Somme.  The Division saw heavy fighting on the Somme, and by September was fighting near Combles. On 13 September 1916, Henry was on sentry duty in the front line when he was killed by a German shell. His friends buried him behind the line, and marked his grave with a  wooden cross. Henry was 22 years old, and rests in Combles Communal Cemetery Extension, France. 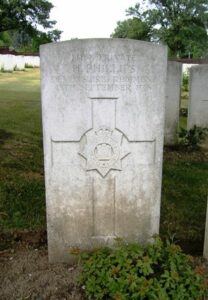 John Mathias Thomas, Private, 235259, King’s Liverpool Regiment. John was the son of David and Anne Thomas, of Ornant, Penrhiwllan. He enlisted at Brecon into the army, and served with the Yorkshire Regiment, before being posted to the 17th Battalion, King’s Liverpool Regiment. The battalion landed at Boulogne on 7 November 1915 attached to 89 Brigade, 30th Division, and took part in its first major action during the Somme Offensive, at the Battle of Albert, where they captured Montauban. They then fought during the latter stages of the offensive, during the Battle of Le Transloy, before wintering on the Somme. In March 1917 the Division followed the German Retreat to the Hindenburg Line, and in April took part in the First Battle of the Scarpe, and then at the later Second Battle of the Scarpe. Later that year they were moved north to Ypres, and fought at the Battle of Pilckem. At the beginning of 1918 the Division were stationed near St. Quentin, and when the Germans launched their Offensive here on 21 March, the Division took part in the Battle of St Quentin, but were pushed back, fighting at the Actions at the Somme Crossings, and the Battle of Rosieres. They were then pulled from the line to rest and rebuild, and moved to Flanders, but were caught up in the action again here when the Germans launched a fresh offensive along the Lys, fighting at the First Battle of Kemmel. John was killed in action here on 17 April 1918. He was 40 years old, and is buried at Westoutre British Cemetery, Belgium. 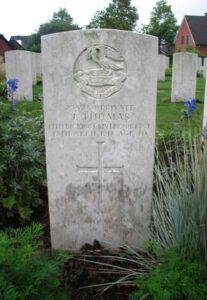