Pennant is a small village which lies about two miles east of the coastal town of Aberarth, off the B4577 to Cross Inn, and some twelve miles south of Aberystwyth. The village lies in the Parish of Llanbadarn Trefeglwys, and contains four places of worship: The church at Llanbadarn Trefyglwys is dedicated to St. Padarn, while there are three other places of worship for Calvinistic Methodists: Bethania Chapel, Pontsaeson Chapel and Pennant Chapel. I have been kindly supplied by Ceredigion Archives with details from the war memorials which are located in these four places of worship in the Parish, but have yet to get hold of photographs of them. This page commemorates the men commemorated in St. Padarn’s Church who fell during the Great War.

David Davies, Private, 45139, Royal Welsh Fusiliers. David was the son of David and Jane Davies, of Brysig Bach, Pennant, Aberarth. He enlisted at Lampeter on 8 February 1916 into the South Wales Borderers, and was posted to France on 23 February 1917, joining the 10th Battalion, Royal Welsh Fusiliers, which was attached to 76 Brigade, 3rd Division. David joined the division in time for its move from the Somme to Arras. He was killed in action during the opening of the Battle of Arras on 30 April 1917. David was 30 years old, and is commemorated on the Arras Memorial, France. There was some confusion about David’s identity after his death, as his mother did not seem to think he was serving with the Royal Welsh Fusiliers, but with a Labour Company of the King’s Liverpool Regiment, with the number 44639. He was in fact transferred from this unit to the RWF. He had then been mixed up with another D. Davies, of Abergele, whose mother was incorrectly informed of her son’s death, only to receive a letter saying he was alive and well. 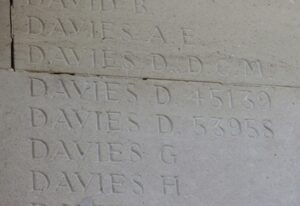 Jenkin Morgan, Able Seaman, Z/2503, Royal Naval Volunteer Reserve. Jenkin was born on 23 February 1885, the son of Evan and Elizabeth Morgan, of Snow Hill, Pennant, Aberarth. He lived at Sybil House, Ynismudu, near Pontardawe prior to the war and enlisted on 16 November 1915 into the Royal Naval Volunteer Reserve. Jenkin was posted to France on 10 July 1916 and was posted to Hawke Battalion, 63rd (Royal Naval) Division. He joined the battalion on the Somme, and later that year took part in the Royal Naval Divisions famous action at the Battle of the Ancre. Jenkin was killed in action here on 13 November 1916, aged 31, and is buried in Ancre British Cemetery, Beaumont Hamel, France. 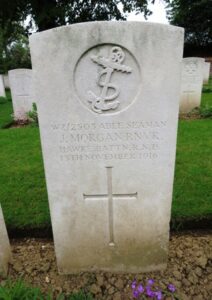 The Seventh Earl of Shannon

Within the Churchyard of Llanbadarn Trefeglwys is the grave of the Sixth Earl of Shannon, Richard Henry Boyle, who had lived at Monachty Mansion. The grave also serves as a memorial to the Earl’s son, Richard Bernard Boyle, who fell during the Battle of Arras and had grown up in the Mansion.

Richard Bernard Boyle, Second Lieutenant, Royal Fusiliers. Richard was born in Ireland on 13 November 1897, the son of Richard Henry Boyle, and Nellie Boyle (nee Thompson). Upon the death of his Grandfather, Henry Boyle, on 8 February 1890 his father became the Seventh Earl of Shannon, and the family took residence of the family seat at Castlemartyr, Ireland. Richard lost both his father and mother prior to the war, his father dying at Monachty on 11 December 1906, and his mother died at sea after falling from a Steamer in the Bay of Biscay on 11 April 1910. Richard was educated at the Royal Military College, Sandhurst, before being commissioned into the Royal Fusiliers in 1916, and was posted to the 4th Battalion, Royal Fusiliers in France. The battalion was attached to 9 Brigade, 3rd Division, and was still on the Somme. It followed the German withdrawal to the Hindenburg Line early in 1917 before taking part in the First Battle of Arras. Richard saw his first major action at Arras, during an attack south of the Arras to Cambrai road, taking command of a company of his battalion after his Captain Furnie had been badly wounded. After heavy fighting over the following days the battalion had moved towards its objective of Guemappe, and on 13 April 1917 launched an assault on the strongly defended village. Richard was killed while leading the right support company of the 4th Royal Fusiliers during the attack on the village that day. He was 19 years old and is commemorated on the Arras Memorial, France. Upon his death, the title of Eighth Earl of Shannon passed to his younger brother, Richard Henry Boyle. 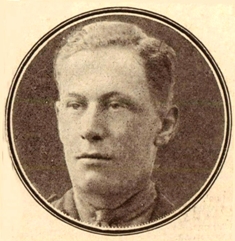 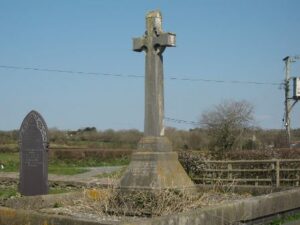