Pennant is a small village which lies about two miles east of the coastal town of Aberarth, off the B4577 to Cross Inn, and some twelve miles south of Aberystwyth. The village lies in the Parish of Llanbadarn Trefeglwys, and contains four places of worship: The church at Llanbadarn Trefyglwys is dedicated to St. Padarn, while there are three other places of worship for Calvinistic Methodists: Bethania Chapel, Pontsaeson Chapel and Pennant Chapel. I have been kindly supplied by Ceredigion Archives with details from the war memorials which are located in these four places of worship in the Parish, but have yet to get hold of photographs of them. This page commemorates the four members of Capel Pennant Calvinistic Methodist Chapel who fell during the Great War.

Isaac Evans Davies, Third Engineer, Mercantile Marine. Isaac was the son of John Elias Davies and Elizabeth Ann Davies (nee Evans), of Glanmorfa, Llanon. He served with the Merchant Navy aboard the S.S. Cliftondale, a Bristol registered cargo steamer. On 25 December 1917, Cliftondale was on route from Cardiff for Algiers, with a cargo of coal, when she was torpedoed and sunk by the German submarine U-35. Isaac was 21 years old when he died that day, and is commemorated on the Tower Hill Memorial, London. The memorial states that Isaac resided at Laburnam Hall.

John William Davies, Lance Corporal, 25471, Welsh Regiment. John was the son of John and Mary Morgan, of Cledau View, Llanon. He enlisted at Tonypandy into the 17th Battalion, Welsh Regiment, which was a bantam battalion, entitled, the 1st Glamorgans, and was attached to 119 Brigade, 40th (Bantam) Division. The Division moved to France during the first week of  June 1916, and moved to the front near Loos. Late in 1916 they moved south to the Somme, and fought at the Battle of the Ancre, and remained in the area over the winter. In March 1917 the Germans withdrew to their shortened line, called the Hindenburg Line, and the 40th Division were one of the Divisions that followed the withdrawal. Later in the year they took part in the Battle of Cambrai, playing an important role in the attack on Bourlon Wood. John was badly wounded at Bourlon Wood, and died on 25 November 1917, aged 21. He has no known grave, and is commemorated on the Cambrai Memorial, Louverval, France. The memorial states that John resided at Lletyrwenol. 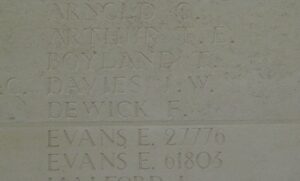 Evan Aeron Jones, Gunner, 190076, Royal Field Artillery. Evan was the son of Daniel and Jane Jones, of Pontypetris, Pennant. He enlisted at Fishguard into the Royal Artillery, and was posted to the 7th Reserve Battery, which was based in Lancashire. Evan died at Preston Military Hospital on 18 February 1917, aged 23. He is buried in Pennant Calvinistic Methodist Chapelyard. The memorial states that Evan resided at Pontypetris.

Evan Morgan Jones, Private, 48952, Royal Army Medical Corps. Evan was the son of James and Mary Jones, of Tirdu, Pennant. He enlisted at Aberystwyth into the Royal Army Medical Corps. He was posted to Salonika to join the British forces there, and embarked aboard the S.S. Transylvania in May 1917. On 4 May 1917 the Transylvania was torpedoed and sunk by a German submarine off Savona, Italy, with the loss of over 400 lives. Evan was 25 years old when he died that day, and is commemorated on the Savona Memorial, Italy. 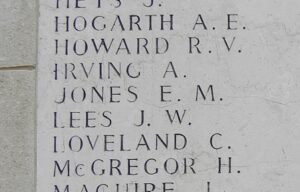 The Memorial Plaque in the Church reportedly commemorates its ten members who fought during the Great War, including those who fell. The names on the memorial are: