Pennant is a small village which lies about two miles east of the coastal town of Aberarth, off the B4577 to Cross Inn, and some twelve miles south of Aberystwyth. The village lies in the Parish of Llanbadarn Trefeglwys, and contains four places of worship: The church at Llanbadarn Trefyglwys is dedicated to St. Padarn, while there are three other places of worship for Calvinistic Methodists: Bethania Chapel, Pontsaeson Chapel and Pennant Chapel. I have been kindly supplied by Ceredigion Archives with details from the war memorials which are located in these four places of worship in the Parish, but have yet to get hold of photographs of them. This page commemorates the single member of Bethania Calvinistic Methodist Chapel who fell during the Great War.

Joseph A. Williams, Private, 39026, Cheshire Regiment. John was the son of Joseph and Kate Mary Williams. His father had died when Joseph was young, and his mother had married John Martin, of Pembroke Dock in 1897. Joseph probably left home to work at Ffynnonwen prior to the war, as he is shown as living in Llanon. He enlisted at Cardiff into the army, and had served with the 19th Battalion, Cheshire Regiment before being posted to the 59th Labour Company, Labour Corps.  Joseph was badly wounded at Ypres and died on 17 June 1917, aged 26. He is buried at Mendinghem Military Cemetery, Belgium. 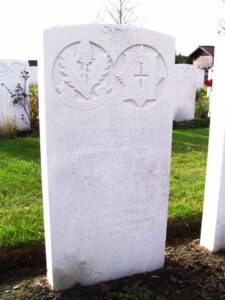