New Cross is a small village which sits on the B4340 road, about three miles south-west from its junction with the main A487 coastal road near Southgate. The men of the area who fell during both World Wars are commemorated on two separate plaques which are located in the Chapelyard of Capel Horeb. 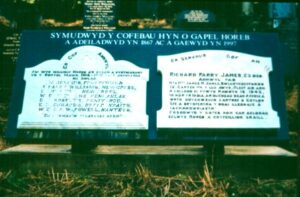 Evan David Edwards, Private, 64068, Machine Gun Corps. Evan was born at Tregaron in 1897, the son of Elizabeth Edwards. Elizabeth was widowed by 1911, and lived with Evan at Shop Dyffryn, Llanbadarn. Evan enlisted at Aberystwyth into the South Wales Borderers on 13 December 1915. He went to France on 10 July 1917, where he was posted to the 228th Company, Machine Gun Corps, which was attached to the 39th Division. He joined the Company at Ypres. Evan was only with his new unit for two weeks, before he was wounded. He died of his wounds at Poperinghe on 24 July 1917, aged just 19, and is buried at Gwalia Cemetery, Belgium. 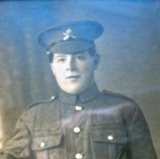 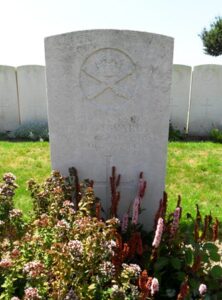 Evan Griffiths, Private, 59180, Northumberland Fusiliers. Evan was born at Llanbadarn in 1895, and was the nephew of Morgan Jones, of Bryngaron, Tregaron. He enlisted at Lampeter into the Army Service Corps, but was posted to France with the 19th Battalion, Northumberland Fusiliers, which was attached to the 35th Division as the Pioneer Battalion. The Division moved to France on 29 January 1916, and saw its first major action during the Battle of the Somme. The Division followed the German Retreat to the Hindenburg Line in March 1917. Later in the year they moved north to Ypres, and fought at the Second Battle of Passchendaele. By Spring of 1918 they were back on the Somme, and fought at the First Battle of Bapaume, during the German Offensive. Evan was killed on the Somme on 28 March 1918, during the desperate fighting which ensued. He was 22 years old, and is commemorated on the Pozières Memorial, France. 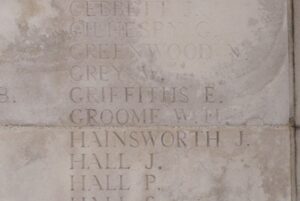 David William Jenkins, Private, 11289, Royal Welsh Fusiliers. David was born at Llanfihangel, Breconshire in 1886, the Son of Thomas and Margaret Jenkins. The family had resided at Llanbadarn prior to the war. David enlisted at Brecon into the army, and was posted to France on 11 December 1914, where he joined the 1st Battalion, Royal Welsh Fusiliers, which was at Ypres attached to 22 Brigade, 7th Division. The Battalion had suffered heavy casualties during First Ypres, and were by now in positions near Neuve-Chapelle. In March 1915 the 7th Division fought at the Battle of Neuve-Chapelle. During May they fought at the Battle of Aubers Ridge, and at Festubert, before taking part in the Battle of Loos in September. In the summer of 1916, the Division was on the Somme, and took part in the Battle of Albert, capturing Mametz. David was killed on the Somme on 4 July 1916, during the battalions attack on Quadrangle Trench, south of Mametz Wood. He was 20 years old, and is commemorated on the Thiepval Memorial, France. 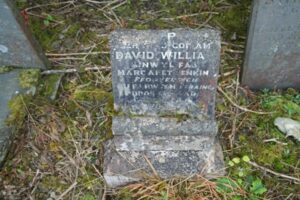 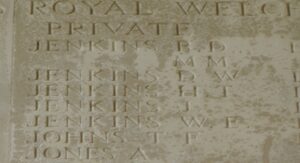 William Edward George Pryce Wynn Powell, Lieutenant, Welsh Guards. William was born in 1900, the son of Captain E.A.L. Powell, of Nanteos, Llanbadarn. He was commissioned into the Welsh Guards, and by the  summer of 1918 was in command of King’s Company, 1st Battalion, Welsh Guards, which was attached to the 3rd Brigade, Guards Division. On 8 August the Australian Corps advanced towards the town of Villers Brettoneux and won a mighty battle there against the Germans, thus turning the war. On 21 August the British launched an attack on the Somme, and the Guards Division fought here at the Battle of Albert, and then pushed east towards Bapaume. From here on the Allies had the upper hand, and moved towards the Hindenburg Line, where the Guards Division fought at the Battle of Havrincourt and the Battle of the Canal du Nord. Once the Hindenburg Line had been broken, the Allies swept eastwards over territory that had been occupied by the Germans for four long years. The Guards fought at the Battle of Cambrai, helping drive the Germans back across the Rivers Selle and Sambre in the coming weeks. In one of the last actions fought by the Welsh Guards in the Great War, on 6 November 1918, they had been tasked with capturing the village of Amfroipret, and nearby Bavai. William was killed during the attack on Amfroipret that day. He was originally buried at Buvignies, but his grave was moved after the war to the larger Maubege-Centre-Cemetery, France. There is a Memorial to William at St. Padarns Church. 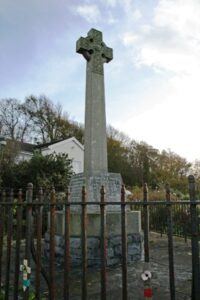 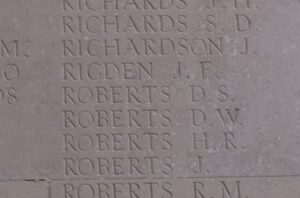 William David Stephens, Gunner, 156560, Royal Garrison Artillery. William was born at Llanbadarn in 1887, the son of W. and S. Stephens, of Aberystwyth. He married in 1910, and by 1911 had moved to Harcourt Street, London with his wife Elizabeth, where he worked as a dairyman. William enlisted at Hammersmith into the Royal Artillery, and was posted to France with 265th Siege Battery, Royal Garrison Artillery, which had formed at Hartlepool on 28 September 1916. By the summer of 1917 the Battery had moved to Ypres, where it supported the Allied assault during the Third Battle of Ypres. William was wounded here, probably by German counter-battery fire, and died of his wounds on 15 September 1917. He was 30 years old, and is buried at The Huts Cemetery, Belgium. His bereaved widow, Elizabeth, moved back to 56, Terrace Road, Aberystwyth. 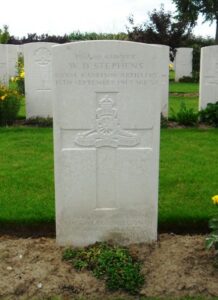 John Parry Williams, Third Engineer, Mercantile Marine. John was born at Llanrhystud in 1894, the Son of John Thomas and Jane Williams (nee Parry). The family later resided at the Post Office, New Cross, Aberystwyth. John was an iron worker prior to the war, before becoming an engineer with the Mercantile Marine, serving aboard the SS Argyll, a Newport registered Turret Hull steamship. On 13 April 1917, Argyll was on route from Port Kelah for Middlesbrough with a cargo of iron ore, when she was torpedoed and sunk by the German submarine U-84. John was among 22 men killed in her sinking. He was 23 years old, and is commemorated on the Tower Hill Memorial, London.

Richard Parry James, Sub-Lieutenant (A), Royal Naval Volunteer Reserve. Richard was the son of James Morgan James and Mary James, of New Cross, Aberystwyth. He served with the Royal Navy at HMS Lanka, the Royal Naval shore establishment at Ceylon. Richard was killed here during the Japanese invasion of the Far East, on 13 March 1943. He was 23 years old, and is commemorated on the Lee-on-Solent Memorial, Hampshire.