Nebo is a small village situated about two miles inland from Llanon, on the Ceredigion coast. Nebo Chapel contains two black marble war memorials: one which commemorates the two former members who fell during the Great War (oddly both in Iraq) and another which commemorates the fifteen members who served and returned. The photographs of the plaques are courtesy of Dr Gethin Matthews, of Swansea University. 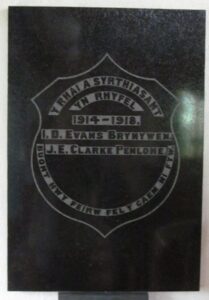 John Evan Clarke, Driver, T4/145740, Royal Army Service Corps. John was the son of William and Sarah Clarke, of Llanrhystud. He enlisted at Aberystwyth into the Army Service Corps. He was posted to the Middle East, and joined the 39th Field Ambulance, Royal Army Medical Corps, which was attached to the 13th (Western) Division. The division had moved into Mesopotamia early in 1916 as part of the force sent in to relieve the siege of Kut. John became ill, and died there on 11 June 1916, aged 27. He is buried in Amara War Cemetery, Iraq.

Isaac David Evans, Driver, T4/145741, Royal Army Service Corps. Isaac was the son of Thomas and Anne Evans, of Bryn Ywen, Nebo, Llanon. He had worked at Ammanford prior to the war, but travelled to Aberystwyth to enlist on 17 November 1915 into the Army Service Corps. He was posted to the Middle East with the 39th Field Ambulance, Royal Army Medical Corps, which was attached to the 13th (Western) Division. The division was in Egypt after being evacuated from Gallipoli, and Isaac joined his new unit in time to take part in the offensive into Mesopotamia, and the attempt to relieve the besieged town of Kut. He died of dysentery on 24 April 1916, aged 25, and is buried in Amara War Cemetery, Iraq. 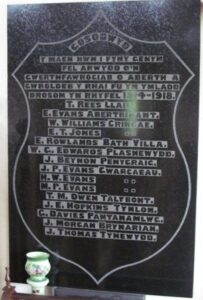