Nantcwnlle is a village and a parish which sits about eight miles north of Lampeter, and three miles west of Llangeitho. The parish takes its name from a small brook which flows into the river Aeron by which it is intersected, and from the dedication of its church to St. Cynllo, a fifth century saint. The names of the men below are taken from the War Memorial inside St Cynllo’s Church, which has since closed and been converted into a dwelling. The memorial is in the process of being moved to Trefilan Church. Nearby is Bwlchllan Methodist Chapel, which contains a memorial to the members who served during the Great War, and also a plaque in memory of Jenkin Robert Davies. This page commemorates all those of Nantcwnlle who lost their lives during both World Wars. 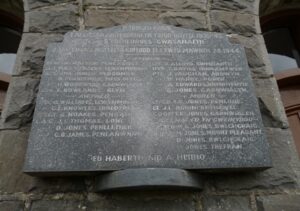 Evan James Davies, Second Lieutenant, Welsh Guards. Evan was the son of Roderick and Mary Davies, of Gartheli. The family later moved to London, and Evan enlisted there into the 28th Battalion, London Regiment (Artists Rifles) OTC. He was commissioned into the 1st Battalion, Welsh Guards, and served with them in France from 3 October 1917. The Welsh Guards were attached to the 3rd Guards Brigade, Guards Division, and Evan would have taken part in the Battle of Cambrai soon after joining them. They remained in the area over the final winter of the war, and were stationed near Gouzeaucourt when the German Spring Offensive hit the area on 21 March 1918, at the Battle of St Quentin. On the night of 27 March 1918, the Welsh Guards moved into the front line to relieve the 1st Battalion, Grenadier Guards, at Boyelles. On the following morning, 28 March 1918, the Germans launched a fresh assault on the Welsh Guards positions, and it was whilst trying to repel this attack that Evan was killed. He is commemorated on the Arras Memorial, France. 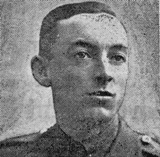 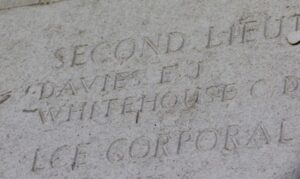 Jenkin Robert Davies, Private, 38467, Gloucestershire Regiment. Jenkin was the son of Daniel and Jane Davies, of Lone, Bwlchyllan, Felinfach. He enlisted at Brecon into the South Wales Borderers, but was transferred into the 8th (Service) Battalion, Gloucestershire Regiment, which was attached to 57 Brigade, 19th (Western) Division. Jenkin probably joined the battalion in time to take part in the Somme offensive in July 1916, where it took part in the second wave of the attack on Ovillers-La Boisselle on 1 July, capturing the village at heavy cost. It then fought through the Somme Battles of Pozières and the Ancre in 1916. In 1917 the Division moved north to Ypres, taking part in the Battle of Messines. It then took part in the later Battles of the Menin Road and at Polygon Wood. Jenkin was killed in action at Polygon Wood on 20 September 1917. He was 19 years old, and is commemorated on the Tyne Cot Memorial, Belgium. There is a separate memorial to Jenkin at Bwlchllan Methodist Chapel. 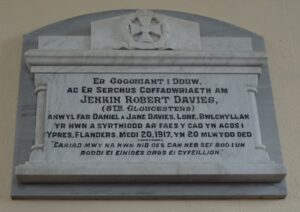 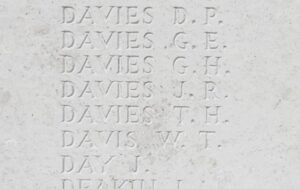 John Evan Davies, Gunner, 32319, Royal Field Artillery. John was the son of David and Mary Davies, of Glangors, Penuwch, Llanio Road. He enlisted at Caerphilly into the Royal Artillery, and landed in France on 5 September 1915, attached to A Battery, 100th Brigade, Royal Field Artillery, which was attached to the 22nd Division. The Division crossed to France in early September 1915, with all units being concentrated near Flesselles by 9 September, but the Division was then diverted to Salonika, sailing from Marseilles on 27 October 1915. John was wounded during the Second Battle of Doiran. He died of his wounds on 21 September 1918, aged 25, and is buried at Sarigol Military Cemetery, Kriston, Salonika.

John Daniel Ebenezer, Lance Corporal, 40399, Royal Welsh Fusiliers. John was the son of David and Elizabeth Ebenezer, of Glangwenffrwd, Llangeitho. He enlisted at Lampeter into the army, and was posted to France in 1916, joining the 1st Battalion, Royal Welsh Fusiliers, which was attached to 22 Brigade, 7th Division. The battalion was the battalion of Siegfried Sassoon and Robert Graves, the famed war poets. The Division was on the Somme, and took part in the Battle of Albert, where it captured Mametz. It then fought at the Battle of Bazentin, and the Attacks on High Wood, playing a successful part in the ‘dawn attack’, and were also the first troops into High Wood. The Division then took part in the Battle of Delville Wood, and the Battle of Guillemont, before spending the winter on the Ancre. John was wounded over the winter, and evacuated to Doullens hospital, where he died on 13 January 1917, aged 20. John is buried at Doullens Communal Cemetery Extension No. 1, France. 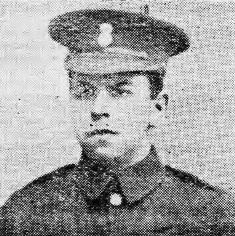 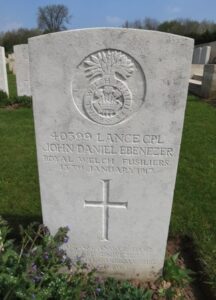 Daniel Lewis Evans, Driver, T2/016552, Army Service Corps. Daniel was the son of David and Mary Evans, of Hafod (late Goitre), Felinfach. He had been at sea for three years, prior to enlisting at Bideford on 1 September 1914 into the Army Service Corps, and just over two weeks later landed in France, joining the BEF. He was then posted to L Company at Marseilles, serving there until being transferred to Le Havre in April 1915. On 10 September 1915 Daniel was attached to the 142nd Army Telegraph Company, Royal Engineers. He came home on leave for a week in November 1915, before rejoining is unit in France on 28 November 1915. Daniel’s unit was on the Somme, carrying out important work during the offensive, relaying vital signals to and from the front. Daniel was wounded on the Somme, and died at 21 Casualty Clearing Station at Corbie on 27 July 1916. He was 23 years old, and is buried at La Neuville British Cemetery, Corbie, France. 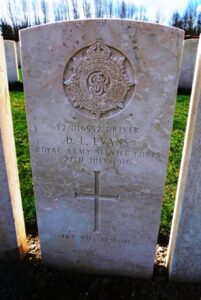 Griffith Thomas Jenkins, Private, 43637, King’s Liverpool Regiment. Griffith was the son of John and Mary Jenkins, of Ffynonforgan, Felinfach. He enlisted at Newport into the South Wales Borderers, before being transferred to the 13th Battalion, King’s Liverpool Regiment, which was attached to 9 Brigade, 3rd Division. Griffith probably joined the battalion after its exertions on the Somme in 1916. In May 1917 the Division was at Arras, and fought at the First and Second Battles of the Scarpe, and at the Battle of Arleux and the Third Battle of the Scarpe, where they captured Roeux. Griffith was killed in action here, just before the division was transferred to Ypres, on 7 July 1917. He was 22 years old, and is buried at Red Cross Corner Cemetery, Beugny, France. 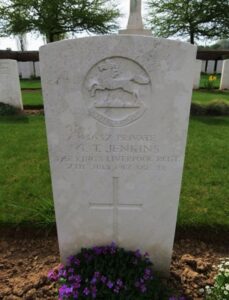 Stephen John Jones, Private, 2672, Welsh Regiment. Stephen was the son of John and Mary Jones, of Tynfronisaf, Gartheli. He was a regular soldier, and served with the 1st Battalion, Welsh Regiment. At the outbreak of war the battalion was at Chakrata, India, attached to Dehra Dun Brigade in Meerut Division. It returned to England, landing at Plymouth on 22 December 1914, becoming attached to 84 Brigade, 28th Division at Hursley Park. Stephen landed at Le Havre with the battalion on 18 January 1915, and the entire division moved to Ypres, being bussed to the Hill 60 sector. Stephen was killed in action just a month later, at The Bluff on 20 February 1915, aged 32. He is commemorated on the Ypres (Menin Gate) Memorial, Belgium. There is a Memorial to him at Abermeurig Chapel. 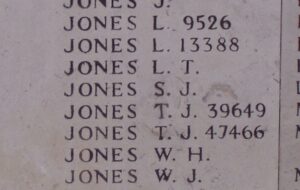 Thomas Lloyd, Sergeant, 1201, Australian Machine Gun Corps. Thomas was born at Nantcwnlle, the son of Anne Lloyd, of Persondy, Felinfach. He emigrated to Australia prior to the war, and resided at Gwalia House, Mitchell Street, Sydney, working as a Carpenter. He enlisted on 20 February 1915 into the 18th Battalion, Australian Infantry, and sailed from Sydney aboard HMAT Ceramic on 25 June 1915 for Egypt. Thomas landed at Anzac Cove, Gallipoli on 16 August 1915, and served there until the evacuation in January 1916. He landed at Marseilles with his battalion on 23 March 1916, and proceeded to Flanders. The battalion took part in its first major battle at Pozières between 25 July and 5 August 1916. In March 1917 the battalion followed the German retreat to the Hindenburg Line, and was involved in some particularly heavy fighting around Warlencourt in late February. The battalion took part in the Battle of Bullecourt during May 1917, and just after the battle, Thomas was sent to Machine Gun School. After completing his training as a Machine Gunner, Thomas was promoted to Sergeant, and joined the 5th Company, 2nd Battalion, Australian Machine Gun Corps, which was attached to the 2nd Australian Division. He fought with his new unit at the Third Battle of Ypres later that year. During the summer of 1918, the Australian Corps took part in a series of stunning offensives on the southern sector of the Somme. On 2 September 1918, Thomas was in action near Mont St Quentin, when he was killed outright by an exploding shell. He was 33 years old, and buried on the battlefield by his comrades. After the war Thomas was re-interred at Péronne Communal Cemetery Extension, France. The memorial to the 2nd Australian Division is at Mont St Quentin, the scene of their greatest triumph. 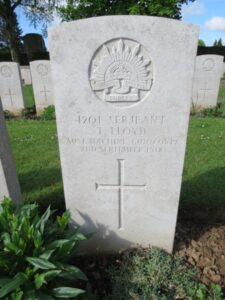 Evan Emlyn Evans, Flying Officer (Pilot), 136934, Royal Air Force Volunteer Reserve. Evan was commissioned on 30 October 1942 as Flying Officer (Pilot) and was posted to 88 Squadron, Royal Air Force, which was based at RAF Swanton Morley, East Anglia equipped with the Douglas Boston III and IIIA, from where it carried out attacks on German coastal shipping and targets on the coast of occupied Europe. In August 1943 the squadron relocated to RAF Hartford Bridge, Hampshire, as part of 137 wing of No.2 Group of the 2nd Tactical Air Force in preparation for the invasion of Europe, tasked with attacking German communications and airfields. On 23 March 1944, Evan was flying as Pilot of Douglas Boston, Serial BZ204/K, which crashed in Minley Woods whilst approaching Hartford Bridge. All four men aboard were killed. Evan is buried at Cardiff (Cathays) Cemetery.