Llwyncelyn sits on the A487 road midway between Llanarth and Aberaeron, near the Ceredigion coast. The village houses a memorial hall, which was built to commemorate the men of the area who fell during both World Wars. These men are commemorated on two separate marble plaques, which are located inside the memorial hall. 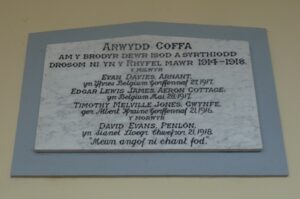 Evan Davies, Major, Royal Welsh Fusiliers. Evan was the son of Evan and Mary Davies, of Arnant, Llwyncelyn. The family also had a home at Newport, Monmouthshire.  Evan served as a Temporary Major with the 15th Battalion, Royal Welsh Fusiliers, which was attached to 113 Brigade, 38th (Welsh) Division. Evan didn’t embark with the battalion for France in December 1915, but was amongst the officers who fought at Mametz Wood in July 1916, being in command of B Company. After suffering heavy casualties at Mametz Wood, the battered Division was withdrawn to Hébuterne, before being transferred to Ypres, taking the sector of the line along the Canal Bank at Boesinghe. It held this line for the coming months, before being withdrawn to train for the forthcoming assault on Pilckem Ridge. On 20 July 1917 the Division moved back into the line, where it readied for the forthcoming attack, which was to take place on 31 July 1917. On 27 July 1917, an RFC aeroplane reported that the Germans had pulled back from their front line positions facing the Welshmen at Boesinghe, so A Company, 15th Royal Welsh Fusiliers were detailed to creep across No Man’s Land to verify the information. Evan led the party of men across, but they were spotted by the Germans, who were still holding their positions, and poured concentrated Machine-Gun Fire into A Company, wiping it out almost to a man. Evan was reported to have been severely wounded and taken prisoner by the Germans, but is officially recorded as being killed in action that day (although the CWGC record his date of death as being 28 July 1917). He is buried at Dragoon Camp Cemetery, Belgium. 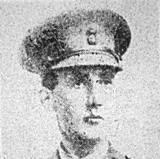 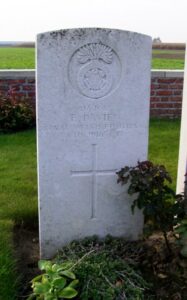 David Evans, Second Mate, Mercantile Marine. David was the son of Thomas and Eliza Evans, of Penlone Cottage, Llwyncelyn. He served with the Mercantile Marine aboard the SS Cheviot Range, a West Hartlepool registered merchant steamer. On 21 February 1918, she was 25 miles off the Lizard, Cornwall, on passage from Tuticorin for Britain when she was captured by the German submarine U-102, which proceeded to shell and torpedo the ship. David was amongst 27 men who died in the sinking. He was 38 years old, and is commemorated on the Tower Hill Memorial, London.

Edgar Lewis James, Driver, W/1341, Royal Field Artillery. Edgar was born in 1895, the son of Magdalen James, of Aeron Cottage. He worked for the Great Western Railway, at Ammanford, and enlisted there into the Royal Field Artillery, serving with ‘B’ Battery, 119th Brigade, which was attached to the 38th (Welsh) Division. Edgar landed in France on 24 December 1915, and the Division spent its first winter in the trenches near Armentieres. In June they marched south to the Somme, where they famously captured Mametz Wood in July 1916. The Division suffered terrible casualties at Mametz, and were taken out of the line, and moved to Ypres to rebuild. Edgar was killed in action here on 28 May 1917. He was just 22 years old, and is buried at Dickebusch New Military Cemetery Extension, Belgium. He is also remembered on the GWR Memorial at Chester. 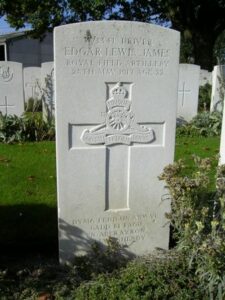 Timothy Melville Jones, Sapper, 62768, Royal Engineers. Timothy was born in 1895, the son of Daniel and Grace Jones, of Gwynfe, Llanarth. He resided at Bedwas prior to the war, and enlisted at Caerphilly into the Royal Engineers. Timothy was posted to the 151st Field Company, Royal Engineers, which was attached to the 38th (Welsh) Division. The Division had landed in France during December 1915 and had spent their first winter in the trenches near Armentieres. In June they marched south to the Somme, where they were tasked with the capture of Mametz Wood. The attack on the wood began on 7 July, but met with fierce resistance, and it took until 14 July to totally clear the wood. The Division suffered terrible casualties at Mametz, and were taken out of the line, and moved to Hebuterne, on the northern edge of the Somme battlefield. The Division was only here a matter of weeks, but during this time, on 21 July 1916, Timothy was killed in action. He was 21 years old, and is commemorated on the Thiepval Memorial, France. 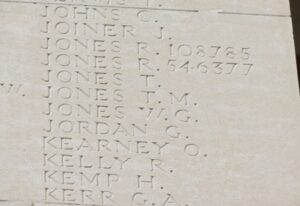 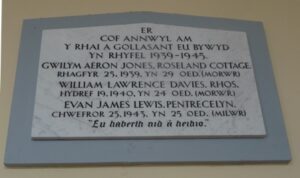 William Lawrence Davies, Sailor, Merchant Navy. William was the son of Albert and Leah Davies, of Rhos, Llwyncelyn. He served with the Merchant Navy aboard the SS Sulaco, a Liverpool registered Cargo Steamer. On 20 October 1940, she was on route from Avonmouth to Victoria, Cameroon via the USA in ballast when she was torpedoed and sunk by the German submarine U-124 and sunk with the loss of 66 lives. William was 23 years old when he died that day, and is commemorated on the Tower Hill Memorial, London. 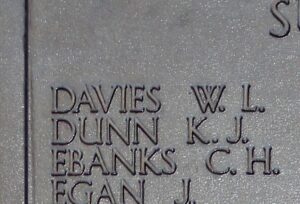 Gwilym Aeron Jones, Cook Steward, Merchant Navy. Gwilym was the son of William and Martha Jones, of Ffos-Y-Ffin, and the husband of Margaret Eleanor Jones, of Henfynyw. He served with the Merchant Navy aboard the SS Stanholme, a London registered cargo steamer. On 25 December 1939, she was on route from Cardiff for London carrying a cargo of coal, when she struck a mine, which had been laid by the German submarine U-33, and sank with the loss of 13 lives. Gwilym was 29 years old when he died that day, and is commemorated on the Tower Hill Memorial, London. 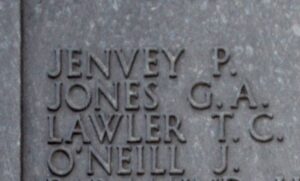 Evan James Lewis, Trooper, 6468077, Reconnaissance Corps. Evan was the son of Thomas and Elizabeth Lewis, of Pentrecelyn. He served with the 56th Regiment, Reconnaissance Corps during the war. The 56th Regiment was formed on 8 January 1941, and served in Libya, during the North African campaign. Evan was possibly wounded in North Africa, and returned back to Britain, dying on 15 February 1943, aged 26. Evan is buried at Llanarth (Llwyncelyn) Independent Chapelyard.