Llanwnen is a small village situated on the crossroads of the B4337 and the A475 roads, about three miles west of Lampeter. It seems that only one man from Llanwnen fell during the Great War, Private John Jones, and a memorial in his memory was erected inside Capel y Groes. The photograph of the memorial is courtesy of Mike Berrell. 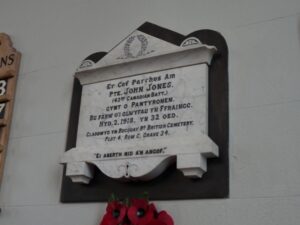 John Jones, Private, 2380109, Canadian Infantry. John was born on 9 May 1889, the son of David and Hannah Jones, of Pantyronen, Drefach. He was a carpenter, and emigrated to Durban, Manitoba, Canada, with his uncle, Tom Davies, prior to the war. On 13 November 1917 John enlisted at Winnipeg into the Canadian Infantry, and was posted to England. He was then sent to France, joining the 43rd (Cameron Highlanders) Battalion, Canadian Infantry. The battalion was attached to the 9th Canadian Brigade, 3rd Canadian Division. John would have joined the battalion in the spring of 1918, and would have taken part in the Canadian Corps famous victory during the Battle of Amiens on 8 August 1918. This victory signalled the launching of the 100 days offensive which would win the war, and the Canadians took part in the great Allied advance over the coming months. By the end of September the Canadians were fighting at the Canal du Nord, and Bourlon Wood, taking part in an heroic action at Tilloy. John was wounded here, and died on 2 October 1918, aged 29. He is buried at Bucquoy Road Cemetery, Ficheux, France. 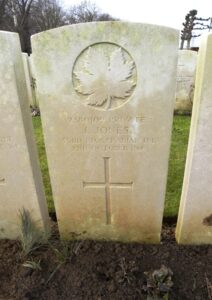