Llanwenog is a parish situated on the A475, about five miles from Lampeter, and two miles northwest of Llanybydder. The men of the parish who fell during both world wars are commemorated on the war memorial at Drefach, although Llanwenog has its own war memorials, the main ones are contained within St Gwenog’s Church, and another is situated inside the old school. The memorials inside the church were carved from oak by Herbert Davies-Evans, who had served as Captain with the Scots Guards, and as a Lord Lieutenant of Cardiganshire from 1889 until 1924, whose son, Colonel Delmé Davies Evans, was a local war hero. Herbert’s wife Mary had designed the bench ends on the church pews, which serve as the memorials to the fallen of the Great War, and the couple were behind the school memorial, which is made of oak, and carved by Joseph Reubens of Bruges, a Belgian refugee, with effigies of the five former schoolboys who fell during the Great War. There is also a framed scroll, which commemorates all of the members of the school who served during the war. 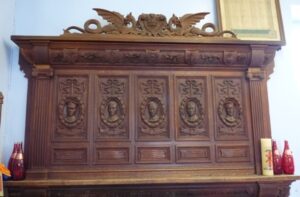 Charles Edward Cheverton, Guardsman, 2034, Welsh Guards. Charles was born on 28 September 1896, the son of William Henry and Alice Cheverton, of Lax Lodge, Llanwenog. Charles’ father worked as Chauffeur to Colonel Herbert Davies-Evans, of Highmead, Llanybydder. Charles was educated at Llanwenog School, and enlisted at Lampeter into the 1st Battalion, Welsh Guards. The Welsh Guards had been raised by Royal Warrant on 26 February 1915, and moved to France on 18 August 1915 to join the 3rd Guards Brigade, Guards Division. Charles possibly joined the battalion after it suffered heavy casualties during the Battle of Loos, arriving as a reinforcement in time to take part in the Battle of the Somme, which was launched on 1 July 1916. In late July 1916 the Division moved to the Somme, where they fought at the Battle of Flers-Courcelette, and then at the Battle of Morval, capturing Lesboeufs Village. Charles was killed when his battalion were being relieved from the line at Combles on 24 September 1916. He was 23 years old, and is commemorated on the Thiepval Memorial, France.

Dan Henry Davies, Private, 5985, King’s Liverpool Regiment. Dan was the son of Jonathon and Mary Davies, of Gwynfryn, Llanwenog. He was educated at Llanwenog School and at Lampeter College, before taking up a post as a teacher at the Kirkham Grammar School, Lancashire. He enlisted at Blackpool on 16 December 1915 into the 5th Battalion Kings Liverpool Regiment. The Battalion landed at Le Havre on 22 February 1915, joining 6 Brigade, 2nd Division, and in December 15 transferred to 99 Brigade, 2nd Division, before re-transferring into 165 Brigade, 55th (West Lancashire) Division. Dan landed in France to join the battalion on 5 July 1916, four days after the opening of the Somme offensive. In July the Division moved into positions facing the German front line at Guillemont, on the Somme. Dan was killed by a German shell on the Somme on 5 July 1916, aged just 23. It was his very first day in action. He was originally buried on the battlefield, but his grave was exhumed in 1920, and Dan was reburied in Péronne Road Cemetery, Maricourt, France. 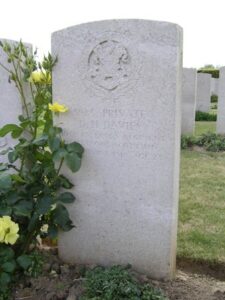 John Clarke Davies, Private, 3346, Welsh Guards. John was the son of Mary Davies, of Beilibedw, Drefach. He was educated at Llanwenog School. John enlisted at Caerphilly into the 1st Battalion, Welsh Guards, who had been in France since July 1915 attached to the 3rd Guards Brigade, Guards Division. John probably got posted to the front after the Somme battles of 1916, joining the Battalion at Ypres, where they took part in the opening assault of Third Ypres, the Battle of Pilckem Ridge. After helping to secure Pilckem, the Guards had a brief rest, before moving back into the line, and taking part in the Battle of the Menin Road, the Battle of Poelcapelle and the First Battle of Passchendaele. It was during the latter battle that John was killed, on 12 October 1917. He has no known grave, and is commemorated on the Tyne Cot Memorial, Belgium. 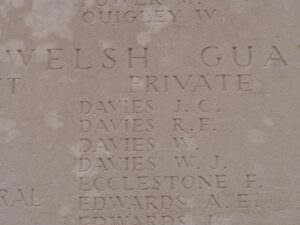 David Lewis Evans, Private, 203572, Oxfordshire and Buckinghamshire Light Infantry. David was the son of John and Elizabeth Evans, of North House, Llanybyther. He was educated at Llanwenog School while the family had resided at Rhydiau, Drefach prior to the war, and enlisted at Llanybydder into the Royal Buckinghamshire Hussars. David then transferred into the 6th Battalion, Ox and Bucks Light Infantry, which was attached to 60 Brigade, 20th (Light) Division, which had been in France since July 1915. David would have joined the battalion after the Somme Battles of 1916, when it took part in the advance to the Hindenburg Line before moving to Ypres. David was killed at The Battle of the Menin Road on 20 September 1917. He was 28 years old, and is commemorated on the Tyne Cot Memorial, Belgium. 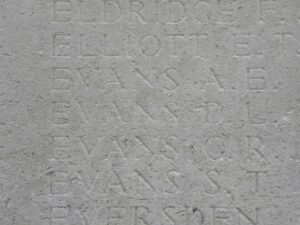 James Thomas, Sergeant, 15052, Grenadier Guards. James was the son of Evan and Hannah Thomas, of Pandy, Rhuddlan, Llanybyther. He was educated at Llanwenog School. James enlisted at London into the 2nd Battalion, Grenadier Guards. At the outbreak of war, the 2nd Battalion was in Barracks at Chelsea, and on 15 August landed in France attached to 4th (Guards) Brigade, 2nd Division, taking part in the retreat from Mons to the Marne. The Division then saw heavy fighting at Ypres, and the Battle of Festubert the following year. In August 1915 a Guards Division was created, and the 2nd Battalion, Grenadier Guards joined 1st Guards Brigade, Guards Division, taking part in the Battle of Loos the following month. In the summer of 1916 the Division moved to the Somme, and it was there, during the Battle of Flers-Courcelette, that James was wounded. He died on 16 September 1916, aged 26, and is buried at St. Pierre Cemetery, Amiens, France. 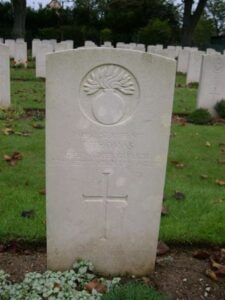 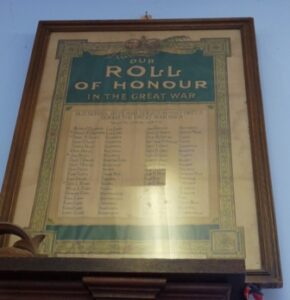