Llanina is a village and parish which lies on the shore of Cardigan Bay, near New Quay, and adjacent to Llanarth. The ancient church is dedicated to St. Ina, a former King of the west Saxons, and contains memorials to two local men who fell, one during WW1 and one during WW2. I do not presently have photographs of these memorials, so any would be most welcome.

Edward Erasmus Vaughan Hughes, Private, 202093, Queen’s Own Royal West Kent Regiment. Edward was born in Islington on 10 December 1880, the son of John Vaughan Hughes, and of Jane Hughes. His parents had moved to Dderwenlas, Llanina prior to the war. Edward had married Edith Mason on 9 December 1906, and the couple lived at 10, Palace Road, Norwood, London, where their two children were born. He enlisted at Anerley into the 2/4th Battalion, Queen’s Own Royal West Kent Regiment, which was attached to 160 Brigade, 53rd (Welsh) Division. The battalion sailed from Southampton on 20 July 1915, and landed at Suvla Bay on 10 August 1915. It saw heavy fighting in the coming days, and suffered the terrible winter at Gallipoli before being evacuated to Egypt on 13 December 1915. In March 1917 the division took part in the advance into Palestine, and fought a series of pitched battles. Edward was killed during the Second Battle of Gaza, on 8 May 1917, aged 36. He is buried in Gaza War Cemetery, Israel. 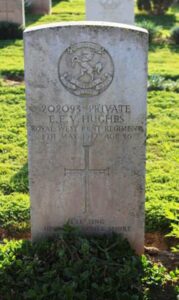 William Evan Butler Yeats, Fifth Engineer Officer, Merchant Navy. William was born in Manchester, the son of John and Jane Yeates. The family later moved to Penwern, Llanarth. William served with the Merchant Navy, as an engineer aboard the M.V. Henry Stanley, a Liverpool registered cargo ship. On 7 December 1942, Henry Stanley was in the north Atlantic, after having been dispersed from Convoy ON-149, when she was torpedoed and sunk by the German submarine U-103, with the loss of 63 lives. William was 34 years old when he died that day. He is commemorated on the Tower Hill Memorial, London, and on his mothers’ headstone at St. Ina’s churchyard, Llanina.