Llanilar is a village and parish which lies about two miles south-east of Aberystwyth. The village was built along the southern side of the River Ystwyth. The church is dedicated to St Hilary, and within its grounds is the War Memorial to the men of the village who fell during both World Wars; one in the Great War and one in the Second World War. 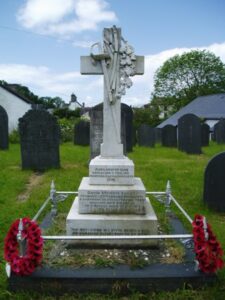 David Morris Evans, Private, 493795, London Regiment. David was born at Penbont, Llanilar, the son of Thomas Evans. Thomas later resided at 4, Chalybeate Street, Aberystwyth, whilst David moved to London to work. He resided at Battersea prior to the war, and enlisted there into the 1st Battalion, London Regiment, but was later transferred into the 1/13th Battalion (Kensington), London Regiment, which was attached to 168 Brigade, 56th (London) Division. The Division saw its first major action at the diversionary attack on Gommecourt on 1 July 1916, and fought on the Somme at Ginchy, Flers and Morval, where they captured Combles. They wintered on the Somme, and followed the German retreat to the Hindenburg Line in March 1917 before taking part in the Battle of Arras. David was killed at Arras on 12 May 1917, aged 31. He is commemorated on the Arras Memorial, France. 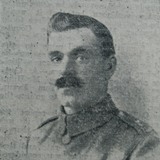 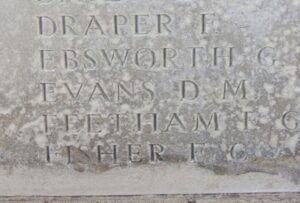 Morgan David Evans, Private, 27403, South Wales Borderers. Morgan was the son of Robert and Elizabeth Evans, of Erwllan, Lledrod, Llanilar. He enlisted at Brecon into army and at sometime in 1916 was posted to France, joining the 6th Battalion, South Wales Borderers, which was attached to the Pioneer Battalion to the 25th Division. The division fought throughout the Battle of the Somme, and then moved to Ploegsteert, where they held the line for the months leading up the Battle of Messines in June 1917. After fighting at Messines, the Division moved north, and fought at Pilckem, before moving south again, where it took up positions around Bullecourt in reserve. Here the Division was used to reinforce the badly depleted British units that were hit in the area by the German Spring Offensive. Morgan was killed in action on the first day of the offensive, on 21 March 1918, aged 28. He has no known grave and is commemorated on the Arras Memorial, France. Morgan does not appear to be commemorated locally. 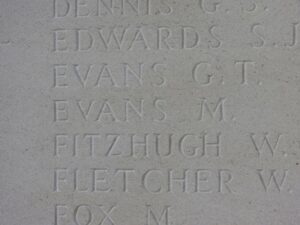 Thomas Flood, Private, 37562, Welsh Regiment. Thomas lived in Llanilar prior to the war. He enlisted at Aberystwyth into the army, and was posted to France on 4 August 1915, joining the 1st Battalion, Welsh Regiment, which was attached to 84 Brigade, 28th Division. The division moved from Flanders to the Loos battlefield during September 1915, to take part in the latter stages of the Battle of Loos. Thomas was killed in action during an attack on the Hohenzollern Redoubt on 2 October 1915. He has no known grave, and is commemorated on the Loos Memorial, France. 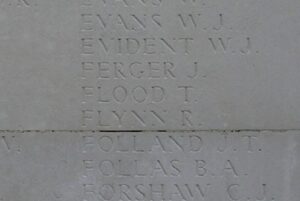 David Parry, MSM, 135523, Royal Air Force. David was the son of William and Sarah Parry. His parents were from Llanilar, but had moved to London just prior to his birth on 7 January 1877. David worked as a Clerk for London County Council prior to the war and enlisted into the Royal Flying Corps as a clerk. David survived the war and was still in France attached to 6th Wing Headquarters, Royal Air Force when he died on 25 December 1918, aged 40. He is buried in Joinville-Le-Pont Communal Cemetery, France. David was posthumously awarded the Meritorious Service Medal for his work in France. He is not commemorated locally.

David Thomas, Private, 11764, Gloucestershire Regiment. David was born in Llanilar in 1883, the son of Evan and Margaret Thomas. The family had moved to 20, Prospect Place, Ystradfodwg by 1901. David enlisted at Pentre into the 8th (Service) Battalion, Gloucester Regiment, which was attached to 57 Brigade, 19th (Western) Division. David landed in France with the battalion on 18 July 1915, and the division assembled before moving to positions north of Loos, near Givenchy. The Battle of Loos was launched on 25 September 1915, and the 19th Division made a disastrous diversionary assault near Givenchy, suffering hundreds of casualties. David was killed in action during a routine period in the trenches on 17 December 1915, aged 33. He is buried in Chocques Military Cemetery, France. David does not appear to be commemorated locally. 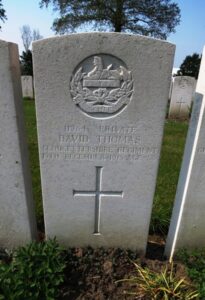 David Watkin, Private, 355973, Royal Welsh Fusiliers. David was born in Llanilar in 1885, the son of Thomas and Jane Watkin. The family had moved to London by 1901. David enlisted at St. Pancras into the Welsh Horse Yeomanry on 25 April 1916. He married Rosalind Charlton, of 97, Nightingale Buildings, St. John’s Wood, London on 9 January 1917, and was posted to Palestine to join the 25th Battalion (Welsh Horse), Royal Welsh Fusiliers, which was attached to 231 Brigade, 74th (Yeomanry) Division. David was killed in action during the advance towards Jerusalem on 31 October 1917, aged 32. He is buried in Beersheba War Cemetery, Israel. David does not appear to be commemorated locally. 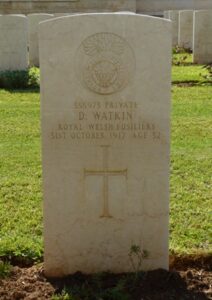 Arthur Davies, Private, 11416202, Seaforth Highlanders. Arthur was the son of John James Davies and J. Davies, of Llanilar. He served with the 7th Battalion, Seaforth Highlanders, which landed in Normandy in June 1944 attached to the 15th (Scottish) Division. The division saw heavy fighting in Normandy, and during the subsequent drive through northern France into Belgium and Holland. Arthur was killed in Holland on 6 November 1944, aged 22 and is buried at Mierlo War Cemetery, Netherlands. Arthur does not seem to be commemorated locally.

Richard Griffiths, Private, 14615740, Hampshire Regiment. Richard was the son of Thomas and Elizabeth Griffiths, of Bronant, Llanilar. He served with the 2/4th Battalion, Hampshire Regiment, which moved to North Africa in January 1943 to take part in Operation Torch, as part of the 46th Division. On 9 September 1943 the division took part in the landings at Salerno, and began the move through Italy. Richard was killed at Monte Cassino on 12 May 1944, aged 30, and is buried at Cassino War Cemetery, Italy. Richard does not seem to be commemorated locally.

Herbert Orlando Peel, Pilot Officer, 116952, Royal Air Force Volunteer Reserve. Herbert was born at The Cottage, Llanilar in 1913. He married Doris Winifred Charleston, of 11, Bodwyn Park, Gresford, at Wrexham in 1942. Herbert was commissioned on 16 February 1942 as a Pilot Officer with the Royal Air Force, and was posted to 61 Squadron, Royal Air Force. The squadron was a bomber squadron, and flew with No. 5 Group, RAF Bomber Command, and by the time Herbert joined it, was equipped with the Avro Lancaster, after having just replaced its aging Manchesters. At around 23.00 on 2 September 1942, Herbert took off from RAF Syerston aboard Lancaster B1, Serial W4136, which was part of a large force sent to bomb a target in Germany. The Lancaster went missing on the following morning, 3 September 1942, with the loss of all of her crew of seven men. Herbert was 28 years old when he died that day, and is commemorated on the Runnymede Memorial, Surrey.