Bwlchygroes Chapel is situated on the A486 road between Llandyssul and New Quay, a mile south of Ffostrasol, in the parish of Llangynllo. The local men who attended the chapel who fell during both World Wars are commemorated on a marble war memorial, in the form of an obelisk, which is located within the Chapelyard, and has the names of the fallen inscribed on panels around its base. 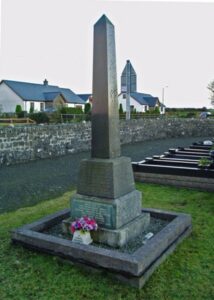 John Davies, Private, 90451, Machine Gun Corps. John was the son of Rees and Anne Davies, of Rhydgoch, Maesllyn, and the husband of Mary Davies, of Llethr Mawr, Maesllyn. He enlisted at Brecon into the South Wales Borderers, but was transferred to the 15th Company, Machine Gun Corps, which was attached to the 5th Division. John would have joined the Division early in 1917. John saw his first action at the Battle of Arras, fighting at the Battle of Vimy in April 1917, and the Third Battle of the Scarpe the following month. In September the Division moved to Ypres, and fought at the Battle of Polygon Wood, then at Broodseinde and Poelcappelle in September, and at the Second Battle of Passchendaele. The Division then briefly moved to Italy, before being hurriedly recalled to France in March 1918. John was killed almost as soon as the Division arrived back in France, on 28 March 1918. He was 23 years old, and is commemorated on the Arras Memorial, France. 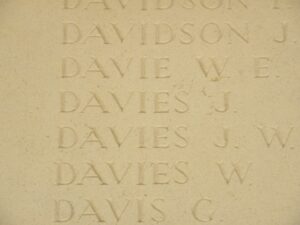 Tom Rees Davies, Lance Corporal, 7313, South African Infantry. Tom was the son of Rees and Maria Davies, of Ffoslas, Ffostrasol. He worked as a Carpenter prior to migrating to South Africa prior to the war. Tom enlisted into the 1st Regiment, South African Infantry, which was raised in Cape Province, joining the South African Infantry Brigade. In December 1915 the Brigade moved to Egypt, seeing action there against the Senussi tribesmen, before becoming transferred to France, joining the 9th (Scottish) Division. The Division then took part in the Battle of the Somme, fighting at the opening Battle of Albert, and then at the Battle of Bazentin, where they captured Longueval. They then fought at the Battle of Delville Wood, where the South Africans created a distinguished name for themselves. Tom was killed on the Somme on 18 October 1916. He was 33 years old, and is buried at Warlencourt British Cemetery, France. 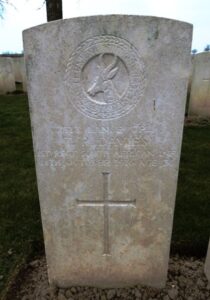 Benjamin Jones, Private, 54546, Welsh Regiment. Benjamin was born in 1895, the son of Thomas and Sarah Jones. The family later resided at 31, High Street, Nantyfyllon. Benjamin enlisted at Maesteg into the Glamorgan Yeomanry at some time prior to the war. Benjamin later served overseas with the 10th then the 13th Battalions, Welsh Regiment, which were attached to the 38th (Welsh) Division and was wounded twice and gassed during his time at the front. After being invalided home, he transferred into the 3rd Battalion, Welsh Regiment and was stationed in the north of England. Benjamin died of pneumonia at Redcar V.A.D. Hospital on 2 November 1918, aged 24. He was buried at Bwlchygroes Independent Chapelyard five days later. 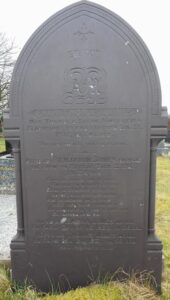 David Llewellyn Jones, Private, M2/181091, Army Service Corps. David was the Son of William and Ann Jones, of Brynmaen, Llandyssul. He married Ada M. Thomas prior to the war and the couple lived at 5, Queen’s Road, New Tredegar, Monmouth. David enlisted at Bargoed into the Army Service Corps, and was posted to their 688th M.T. Company, which was stationed in Salonika. David died in Macedonia on 1 November 1918, aged 30, and is buried at Skopje British Cemetery, Macedonia.

Dewi Jones, Private, 58236, South Wales Borderers. Dewi was born in Llandyssul, the Son of Daniel and Elizabeth Jones. The family later resided at Penrhiw, Ffostrasol. He enlisted at Bath into the Army Service Corps, but later transferred into the 10th Battalion, South Wales Borderers, who were attached to 115 Brigade, 38th (Welsh) Division. The Division landed at Havre during December 1915, and moved to positions near Armentieres. They fought through some of the hardest and most famous battles of the Great War-at Mametz Wood during the Battle of the Somme, and at the Pilckem Ridge during the battle of Passchendaele. During September 1917 the Division was moved to the Armentieres sector, and remained here until being rushed to the Somme in April 1918, taking up positions around Aveluy Wood, near Albert. The German Spring Offensive had swept across the old Somme Battlefields, and had pushed the Allies back further than ever. However, the attack burnt itself out, and for several months this resulted in a stalemate settling along the line on the Somme. On 8 August 1918 a victory at Villers Brettoneux marked the turning point of the war, and the 38th Division launched an attack across the River Ancre on 21 August 1918, and over the coming days pushed the Germans back towards Bapaume. They then moved towards the Hindenburg Line, and fought at the Battle of Épehy, and on towards Cambrai. Dewi was killed in action, aged 20, on 8 October 1918. He is buried at Guizancourt Farm Cemetery, Gouy, France. 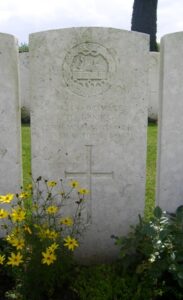 William Jones, Private, 2346, Welsh Regiment. William was the son of John and Elizabeth Jones, of Capel Farm, Ffostrasol. He enlisted on 4 September 1915 into the 3/4th Battalion, Welsh Regiment, which was a reserve battalion for the 1/4th Welsh, which was in the Mediterranean, attached to the 53rd (Welsh) Division. On 11 July 1916 William was discharged from the army as medically unfit, after having blown three fingers off his right hand whilst out shooting. William died within weeks of being discharged, on 29 July 1916. He was 20 years old, and is buried at Bwlchygroes Independent Chapelyard. The cause of his death is not presently known, as he was otherwise fit upon discharge, it was just his lack of fingers which caused him to have been seen as unfit for soldiering. He is not commemorated by the CWGC. 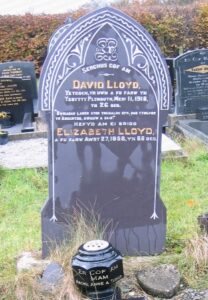 Evan Thomas, Private, 27303, South Wales Borderers. Evan was the son of Elias and Anne Thomas, of Maesyrhaf, Maesllyn. He enlisted at Newport, Monmouth into the 3rd Battalion, South Wales Borderers. Evan didn’t get posted overseas, but died on home service on 25 July 1916. He was 20 years old, and is buried at Bwlchygroes Independent Chapelyard. His brother John also fell.

John Samuel Thomas, Private, 359389, Labour Corps. John was the son of Elias and Anne Thomas, of Maesyrhaf, Maesllyn. He enlisted at Llandyssul into the Pembroke Yeomanry. He later transferred to the Royal Welsh Fusiliers, and served with their 1/5th Battalion for a while, before being transferred to the 805th Employment Company, Labour Corps. This Company served with the Western Frontier Force, and John died of sickness while serving with them on 9 September 1918. He was 26 years old and is buried at Kantara War Memorial Cemetery, Egypt. His brother Evan also fell.

David Thomas Williams, Stoker 2nd Class, K/44598 (Dev), Royal Navy. David was born on 30 November 1898, the son of Thomas and Anne Williams, of Bryn Gernos, Maesllyn. He served with the Royal Navy, and was based at HMS Vivid, the Royal Naval Establishment at Portsmouth. David died in hospital at Plymouth on 7 November 1917, aged 18, and is buried at Bwlchygroes Independent Chapelyard. 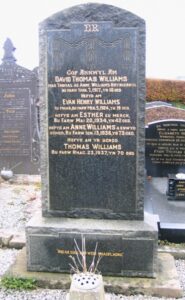 Evan Thomas Davies, Second Engineer Officer, Merchant Navy. Evan was born in 1905, and resided at Isfryn, Bwlchygroes, Maesllyn. He served with the Merchant Navy, aboard the SS Horn Shell, a London registered tanker. On 26 July 1941, Horn Shell was West of Madeira, bound for Curacao, when she was sunk by the Italian submarine Barbarigo, with the loss of five lives. Evan was 36 years old when he died that day, and is commemorated on the Tower Hill Memorial, London. 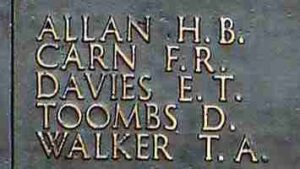 Benjamin Frederick Jones, Mess Room Boy, Merchant Navy. Benjamin was from Gwylfa, Llandyssul, and served in the Merchant Navy, aboard the S.S. Coast Wings (London). She was an old Dutch cargo ship, that had been launched in 1916, and on 27 September 1940, was part of Convoy OG-43 when she was torpedoed and sank by the U-46. Benjamin was killed in the sinking of the ship. He was 24 years old, and is remembered on the Tower Hill Memorial, London.

John Jones, Mate, Merchant Navy. John was the son of son of Isaac and Ann Jones, of Rhoslan, Llangynllo. He was a long serving Merchant Mariner, and lived with his wife, A. D. Jones, at Ecclefield, Yorkshire. John was one of several local men who served aboard the MV Gatinais, a Southampton registered passenger vessel. On her final voyage, Gatinais set sail from Portsmouth to Llanelly, with a cargo of scrap iron. She was sunk by a German E-Boat torpedo attack whilst five miles from Start Point on 3 December 1942, and sank. John was killed in the attack. Of the twelve men aboard Gatinais, only three survived. John was 31 years old and is remembered on the Tower Hill Memorial, London. 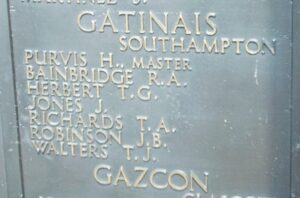 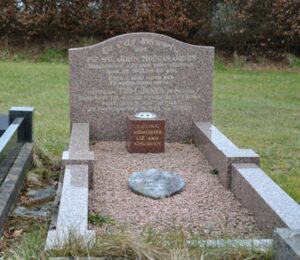