Llangybi is a rural village and parish situated four and a half miles from Lampeter, on the A485 road to Tregaron, about a mile and a half north of Bettws Bledrws. The church is dedicated to St. Cybi, within which is a memorial plaque, dedicated to William John Davies, who fell in the Great War. The Memorial Hall contains the main Parish Memorial, which commemorates the men of the area who fell during both World Wars. The photograph of the Llangybi memorial has been kindly supplied by Jennifer Cairns.

David John Reginald Davies, Sergeant, 1301, Australian Imperial Force. David was the son of David Rees Griffiths and Jane Griffiths of Goitre-Isaf, Derry Ormond. He entered St. David’s College from Lampeter College School in October 1909, and emigrated to Australia in 1911 to continue his education, becoming a school teacher. After the outbreak of war, David enlisted on 28 October 1914 at Liverpool, NSW into the 3rd Battalion, Australian Infantry. After undergoing basic training in Australia, David embarked as part of the 2nd Reinforcements for the 3rd Battalion aboard HMAT Seang Bee on 11 February 1915, and on 7 May 1915 was taken on strength by the battalion at Gallipoli, where it was attached to the 1st Brigade, 1st ANZAC Division, at Anzac Cove. He was in the trenches for a month when he became ill, and was hospitalised at Lemnos for a week, prior to rejoining the battalion, in time for the attack on Line Pine, David was shot in the thigh during the assault on Lone Pine on 8 August 1915. He was evacuated aboard the Hospital Ship SS Dunluce Castle, but died of his wounds at sea on route to Malta on 10 August 1915, aged 27. David was buried at sea, and so is commemorated on the Lone Pine Memorial, Gallipoli. He is named on several memorials as David John Rees Davies, but enlisted under the name David John Reginald Davis. 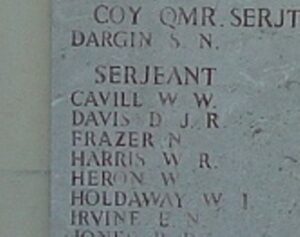 David Lewis Davies, Private, 7612, King’s Shropshire Light Infantry. David was the son of Owen and Catherine Davies, of Bank Building, Llangybi. He had served with the King’s Shropshire Light Infantry prior to the war, and had returned to civilian life, remaining on the Army Reserve. At the outbreak of war David rejoined the colours, and landed in France on 10 February 1915, joining either the 1st or 2nd Battalion of the regiment. On 20 May 1915 the 5th Battalion, King’s Shropshire Light Infantry landed in France, attached to 42 Brigade, 14th (Light) Division, which moved to positions east of Ypres, around Hooge. The Division was to see its first action during the Action of Hooge, where the Division were the first to be attacked by the German use of flamethrowers. They then fought at the Second attack on Bellewaarde. In July 1916 they moved to the Somme, and fought at the Battle of Delville Wood. David was killed whilst fighting around Longueval on 29 August 1916. He is commemorated on the Thiepval Memorial, France. 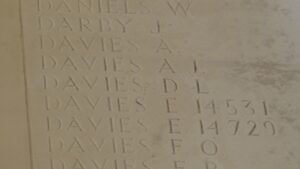 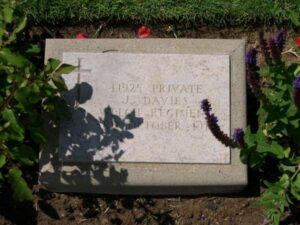 Thomas Watkin Davies, Private, 38164, Welsh Regiment. Thomas was the son of Mary Anne Davies, of Tynfron, Llanfair Clydogau. He enlisted at Aberystwyth into the 9th Battalion, Welsh Regiment, which was attached to 58 Brigade, 19th (Western) Division. The 9th Welsh moved to France on 18 July 1915, and moved with the Division to positions near Loos, where it took part in the opening attack of the Battle of Loos on 25 September 1915. Thomas was killed during the assault of the 9th Welsh near Givenchy on 25 September 1915. He was 20 years old, and is commemorated on the Loos Memorial, France. 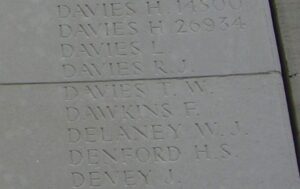 William Davies, Private, 320188, Welsh Regiment. William was born at Derry Lodge, Llangybi, the son of Timothy and Mary Davies. The family had moved from Derry Lodge by 1909. William appears to have worked at New Shop, Llangybi, and was serving with the Pembroke Yeomanry at the outbreak of war, leaving Lampeter with the Yeomanry for Carmarthen in August, prior to its move to Norfolk for garrison duty. During March 1916 the 1/1st Pembroke Yeomanry moved to Egypt, where it merged with the Welsh Border Mounted Brigade and formed the 4th Dismounted Brigade. On 2 February 1917 it merged with the 1/1st Glamorgan Yeomanry to form the 24th Battalion, Welsh Regiment, and became attached to 231 Brigade, 74th (Yeomanry) Division. The Division had formed in Egypt in January 1917 and had fought through the Palestinian Campaign, at the Battles of Gaza and the Battle and capture of Jerusalem. Due to the terrible casualties suffered by the British on the Western Front in March and April 1918 the Division was recalled to the Western Front, and arrived at Marseilles during May 1918. They then fought at the Second Battle of Bapaume during the great offensive, and fought in Flanders before returning to the Somme and fighting at the Battle of Épehy, as part of the offensive towards the Hindenburg Line. William was probably wounded at Épehy, and evacuated to the Military hospital at Wimille, where he died on 30 October 1918, aged 28. There is a memorial plaque in existence which shows that William died in hospital in France on 5 November 1918, but this appears to be incorrect, as no man of that name died with the 24th Welsh on that date. 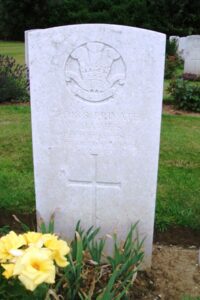 William John Davies, B.Sc., Lieutenant, Royal Garrison Artillery. William was the son of John and Louisa Hughes Davies, of School House, Llangybi. He was educated at Aberystwyth University prior to marrying Jane Hepzibah Hatton, and the couple set up home at Holmthorpe House, 1, Holmthorpe, Red Hill, Surrey, where William was a Schoolmaster. William enlisted into the Inns of Court OTC, and was commissioned on 12 November 1916, and landed in France on 27 December 1916, joining the 140th Siege Battery, Royal Garrison Artillery. William served with the Battery until being mortally wounded at Arras on 14 October 1918, dying the same day. William was 32 years old, and is buried at Bucqouy Road Cemetery, Ficheux, France. The photograph of William is courtesy of John Krijnen. 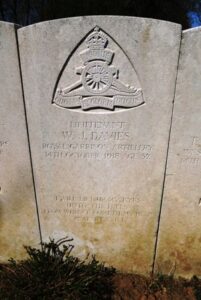 Willie Isaac Griffiths, Private, 266767, Welsh Regiment, Willie was born at Nantcwnlle in 1895, the son of Thomas and Margaret Griffiths, of Glanrhyd. He lived at Gwynfryn, Llangybi prior to the war, where he worked as a farm labourer, and enlisted at Newport, Monmouth into the Monmouthshire Regiment. Willie was probably posted to France in the summer of 1916, where he was transferred to the 1/6th Battalion, Welsh Regiment. The battalion was attached to the 1st Division as the Divisional Pioneer Battalion. The division fought throughout the Somme offensive throughout the summer of 1916, and followed the German retreat to the Hindenburg Line in early 1917. The division was then briefed for an offensive along the Flanders Coast, and moved there during the summer of 1917. The offensive was called off after the Third Battle of Ypres had ground to a halt, and the 1st Division was moved to Ypres, where they fought at the Second Battle of Passchendaele.  The 1/6th Welsh were kept busy repairing and constructing roads to the front lines. Willie was killed in action on 24 October 1917, whilst the battalion was at work. He was 22 years old, and is buried in Essex Farm Cemetery, Belgium. 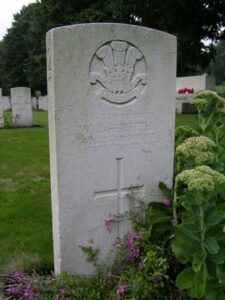 John Turner, Driver, 56897, Royal Field Artillery. John was from Birmingham, and lived at Pwllglas, Llangybi prior to the war, working as a farm labourer. He enlisted there into the Royal Field Artillery, and was posted to France on 13 May 1915, joining A Battery, 47th Brigade, Royal Field Artillery, which was attached to the 14th (Light) Division. In July 1916 the division moved to the Somme, and fought at the Battle of Delville Wood, and then the Battle of Flers-Courcelette, and in March 1917 followed the German Retreat to the Hindenburg Line. May saw it at Arras, where it took part in the First Battle of the Scarpe, and later at the Third Battle of the Scarpe, and later that year fought at Third Ypres. In the Spring of 1918 the Division was near St. Quentin, and was hit there by the German Spring Offensive, which had been launched on 21 March 1918. John was wounded during this period, and died of wounds on 4 April 1918, aged 22. He is buried in Abbeville Communal Cemetery Extension, France. He does not appear to be commemorated locally. 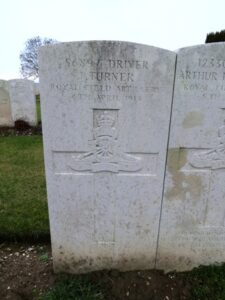 Thomas Ivor Daniel, Private, 5443862, Duke of Cornwall’s Light Infantry. Thomas was the son of John and Hannah Daniel, of Blaenwern Villa, Llangybi. He served with the 2nd Battalion, Duke of Cornwall’s Light Infantry in the North African and Tunisian Campaigns, before taking part in the invasion of Italy in 1943. Thomas was killed in Italy on 8 August 1944, aged 30. He is buried at Florence War Cemetery, Italy.

Evan Emlyn Lloyd, Third Radio Officer, Merchant Navy. Evan was the son of David Herbert and Elizabeth Anne Lloyd, of Lampeter. He served with the Merchant Navy aboard the MV Port Victor, a London registered cargo ship. On 30 April 1943, Port Victor was in the Atlantic, when the German submarine U-107 fired two torpedoes at her, causing the ship to shudder to a halt. Another torpedo hit her as the passengers and crew were embarking on to the lifeboats, sending her to the bottom. Twelve crew members, two gunners and five passengers were lost. Evan was one of the dead. He was 21 years old, and is commemorated on the Tower Hill Memorial, London. 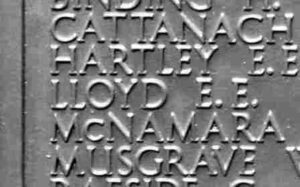 Harri Stanfield Gwyn Morgan, Lieutenant (E), Royal Navy. Harri was the son of the Reverend William Harry Morgan and Jenny Agnes Morgan, of The Rectory, Derry Ormond. He served with the Royal Navy, aboard HMS Argonaut, a Dido Class Light Cruiser. She was sent to the Mediterranean in 1942, as part of Force Q. On 14 December 1942, Argonaut was hit on the starboard side by torpedoes from the Italian submarine Mocenigo, west of Galita Island, and suffered heavy structural damage to her bow and stern structure which were blown off. The crippled destroyer was towed back to Algiers, but Harri had been killed in the explosion that day. He was 22 years old, and is commemorated on the Portsmouth Naval Memorial, Hampshire. (The memorial states C. Morgan). 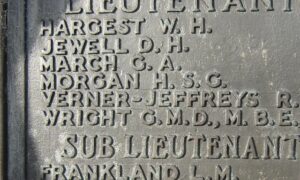 Thomas Wynford Parry, Sergeant, 1381589, Royal Air Force Volunteer Reserve. Thomas was born on 21 January 1922, the son of Thomas Parry and Sarah Parry, of Brynmadog Lodge, Llangybi. He enlisted into the Royal Air Force Volunteer Reserve and was posted to 1654 Heavy Conversion Unit at RAF Swinderby, Lincolnshire. Thomas was on detachment to RAF Wittering, near Peterborough, when he died on 9 October 1942, aged 20. His remains were brought home and he was buried in St. Bledrws Churchyard, Bettws Bledrws on 16 October. 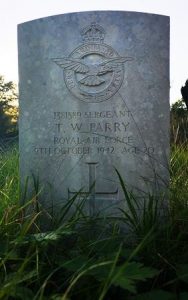 William Albert Smallwood, Staff Sergeant, 5504408, Glider Pilot Regiment. William was the Husband of Annie Jane Smallwood, of Riverslea, Llangybi. He served with the Glider Pilot Regiment, 1st Wing Army Air Corps, as a Glider Pilot with the 1st Airborne Division. William took part in the glider-borne assault on Arnhem, during Operation Market Garden, and landed his Horsa Glider at Oosterbeek on 17 September 1944. William survived a week of intense fighting at Arnhem, but was shot in the eye and died on 24 September 1944 at the Hartenstein Hotel Dressing Station. He was 27 years old, and is buried at Arnhem Oosterbeek War Cemetery, Netherlands.

David Cyril Thomas, M.A., Trooper, 7916942, Royal Armoured Corps. David was the son of Daniel Anthony and Edith Louisa Thomas, of the Rectory, Llangybi, and the husband of Eira Mary Thomas, of Acomb, York. He was a Solicitor prior to the war, and served with the Royal Dragoons. At the outbreak of war the Royal Dragoons were in Palestine, and moved to Syria after equipping with armoured cars. The regiment then became a reconnaissance regiment, moving to North Africa with the Eighth Army, and took part in the Battle of El Alamein. David was killed in action on 7 January 1943, during the advance which followed the victory at El Alamein. He was 34 years old, and is commemorated on the Alamein Memorial, Egypt.