Llangwyryfon lies on the B4576, about eight miles south of Aberystwyth, in the valley of the River Wyre. The Parish Church is dedicated to Saint Ursula and the eleven thousand virgins. The men of the Parish who fell during both World Wars are commemorated on a black marble War Memorial, which stands in the Churchyard. 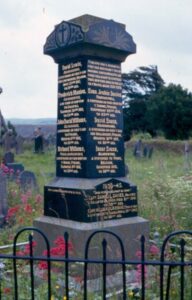 Evan Jenkin Davies, Private, 33608, South Wales Borderers. Evan was the son of David Davies, of Bwlchymynydd, Bethania, Llanon. He worked as a farm servant at Tancastell, Llangwyryfron prior to the war, and enlisted at Newport, Monmouth into the South Wales Borderers. Evan was posted to France in 1916, joining the 1st Battalion, South Wales Borderers, which was attached to 3 Brigade, 1st Division. The Battalion moved from Loos with the Division to the Somme in July 1916, in readiness to take part in the Battle of the Somme, and arrived at Franvillers on 8 July 1916. Two days later they marched into Albert, and on 15 July moved to Lozenge Wood, near Fricourt, and took part in the assault on Bazentin Ridge. After a couple of days rest, the Division moved back into the front, and took part in an attack near Contalmaison on 25 July 1916. Evan was killed in action during heavy fighting at Munster Alley on 25 July 1916. He was 25 years old, and is commemorated on the Thiepval Memorial, France. 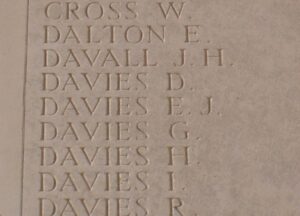 David Evans, Private, 57806, Machine Gun Corps. David was the son of William and Ann Ellen Evans, of Gilfachgoed, Llangwyryfon. He enlisted at Aberystwyth into the South Wales Borderers, but was transferred to the 198th Company, Machine Gun Corps, which was attached to the 58th (2/1st London) Division. The Division moved to France between 20 January and 8 February 1917, and followed the German Retreat to the Hindenburg Line in March. They then took part in the Flanking Operations Round Bullecourt. The Division was still at Bullecourt when David was killed in action on 18 June 1917. He was 20 years old, and is commemorated on the Arras Memorial, France. 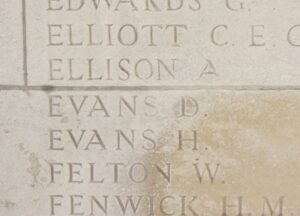 Idris Evans, Private, L/8889, Buffs (East Kent Regiment). Idris was the son of John and Margaret Evans, of Blaenwyrefach, Llangwyryfon. He was a regular soldier, having enlisted at Canterbury into the Buffs (East Kent Regiment) in July 1908, and had served in Singapore with the 2nd Battalion, The Buffs, before moving to India. At the outbreak of war, the Battalion was still in India, and was recalled to England, sailing from Bombay on 16 November 1914. On 23 December 1914 the battalion landed at Plymouth and joined 85 Brigade, 28th Division at Winchester, embarking for France at Southampton on 17 January 1915. The Division joined the remnants of the BEF at Ypres, and took part in the Second Battle of Ypres. Idris was killed in action at Ypres on 15 February 1915. He was 28 years old, and is commemorated on the Ypres (Menin Gate) Memorial, Belgium. 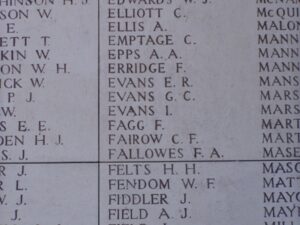 Thomas Morgan George, Private, 38483, Gloucestershire Regiment. Thomas was the son of John and Jane George, of Garthfawr, Llanilar. He enlisted at Brecon into the South Wales Borderers, but was transferred to the 8th (Service) Battalion, Gloucestershire Regiment, which was attached to 57 Brigade, 19th (Western) Division, probably joining the battalion in France after the Somme Offensive had been brought to a close at the end of 1916. In 1917 the Division moved north to Ypres, taking part in the Battle of Messines. The Division then moved further north to Ypres and fought on the Menin Road and at Polygon Wood, before moving up to Broodseinde, Poelcappelle and taking part in the fighting for Passchendaele Village itself. Thomas was wounded at Ypres, and was evacuated to hospital at Bailleul. He died of his wounds there on 23 October 1917, aged 19, and is buried at Outtersteene Communal Cemetery Extension, Bailleul, France. 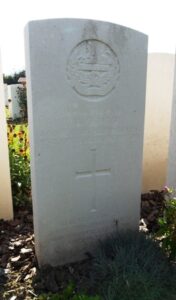 David Jones, Private, G/3438, Queen’s Own (Royal West Kent Regiment). David was the son of Morgan and Anne Jones, of Tan Graig, Bethel, Llangwyryfon. He enlisted at Pentre into the army, and was posted to the 8th Battalion, Royal West Kent Regiment, which was attached to 72 Brigade, 24th Division. David landed at Boulogne with the battalion on 20 August 1915, which then marched to positions near Loos, where they took up reserve positions for the main Battle of Loos. The Division was sent into battle on 26 September 1915 at Loos and suffered terrible casualties due to not being properly trained for battle, and were pulled from the line until the following year, moving to a quiet sector near Ypres. David was killed near Ypres on 23 April 1916. He was 20 years old, and is buried at Dranoutre Military Cemetery, Belgium. 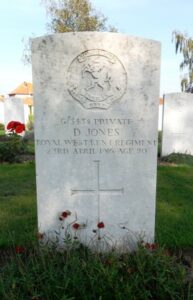 David Owen Jones, Gunner, 168380, Royal Field Artillery. David was born in London in 1887, the son of Daniel and Margaret Jones, of Hafodlasissaf. He enlisted at Aberystwyth into the Royal Field Artillery, and was posted to France at some time in 1916 with 23rd Battery, 40th Brigade, Royal Field Artillery, which was attached to the 3rd Division. David probably fought on the Somme on 1916, and moved to Ypres with the Division the following year. David was wounded at Ypres, and died of his wounds at Remi Sidings Casualty Clearing Station on 13 October 1917. He was 30 years old, and is buried at Lijssenthoek Military Cemetery, Belgium. 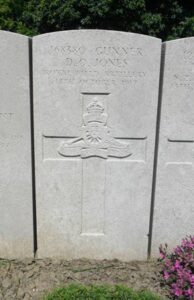 John Jones, Stoker 2nd Class, K/22680, Royal Navy. John was born at Llaindelyn, Llanrhystud on 2 December 1894, the son of Winifred Jones. He served with the Royal Navy aboard the Topaze Class Cruiser, HMS Amethyst. At the outbreak of war, Amethyst was assigned to the Harwich force, and participated in the Battle of Heligoland Blight, before becoming transferred to the 1st Light Cruiser Squadron. She then steamed for the Mediterranean, and took part in the covering operation for the minesweeping effort in the Dardanelles. On 14 March 1915 Amethyst was hit by Turkish field artillery, and suffered 22 men killed, and a further 38 men wounded. John was among the dead. He was 20 years old, and is commemorated on the Portsmouth Naval Memorial, Hampshire.

David Lewis, Private, 28270, South Wales Borderers. David was the son of William and Sarah Lewis, and the husband of Annie Lewis, of Aberdauddwr, Llangwyryfon. He enlisted at Aberystwyth into the South Wales Borderers, and was posted to the 11th Battalion, South Wales Borderers, which was attached to 115 Brigade, 38th (Welsh) Division. The Division had landed in France during December 1915 and had spent their first winter in the trenches near Armentieres. In June they marched south to the Somme, where they were tasked with the capture of Mametz Wood. The attack on the wood began on 7 July, but met with fierce resistance, and it took until 14 July to totally clear the wood. The Division suffered terrible casualties at Mametz, and were taken out of the line, and moved to Ypres to rebuild. Here they fought at the Battle of Pilckem Ridge, and the Battle of Langemarck. David was killed at Langemarck on 23 August 1917. He was 29 years old, and is commemorated on the Tyne Cot Memorial, Belgium. 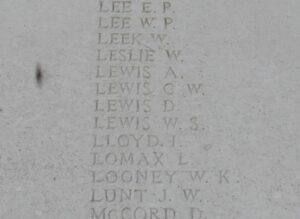 Frederick Manion, Private, 877, Australian Imperial Force. Frederick was born in 1893, the son of Patrick and Elizabeth Manion, of Llangwyryfon. He emigrated to Australia prior to the war, working as a Station Hand, before enlisting at Liverpool, NSW on 23 December 1914 into the 6th Light Horse Regiment. Frederick landed at Gallipoli on 6 August 1915 as part of the 4th reinforcements to the 6th Light Horse, and would have taken part in the famous charge at Lone Pine. On 18 November 1915 Frederick was badly wounded, and evacuated by Hospital Ship to Cairo, where he underwent an operation to amputate his badly damaged leg. Frederick sadly died of shock during the amputation, on 26 November 1915. He was 24 years old, and was buried by the Reverend E. Jellicoe Rogers at Cairo War Memorial Cemetery, Egypt. 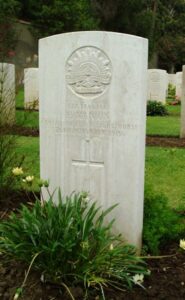 Isaac Owen(s), Private, 2820, South Wales Borderers. Isaac was the son of Hugh and Ann Owen(s). The family was originally from Llangwyryfon, but by 1911 had moved to Gwynfryn House, New Road, Seven Sisters. Isaac married Minnie Turner, the daughter of George and Charlotte Turner, of Chirk, at Chirk in 1912. Isaac volunteered to serve with the Brecknock Battalion, South Wales Borderers and was posted to Pembroke Dock with their 2nd/1st Battalion soon after the outbreak of war. He became ill and died at Pembroke Military Hospital of tuberculosis on 23 September 1915, aged 24. Isaac was not originally commemorated by the CWGC, but as a result of my research was accepted for commemoration on Tuesday 7 February 2017, and will be commemorated in the United Kingdom Book of Remembrance. Isaac is not commemorated locally.

John David Williams, Private, 39945, Welsh Regiment. John was the son of John and Mary A. Williams, of Llangwyryfon. He enlisted at Aberystwyth into the Welsh Regiment, and was posted to France early in 1916, joining the 2nd Battalion, Welsh Regiment, which was attached to 3 Brigade, 1st Division. John joined the battalion at Loos, where it was rebuilding in preparation for its forthcoming move to the Somme. John was killed at Loos on 8 June 1916, a month prior to the move. He was 20 years old, and is buried at Loos British Cemetery, France. 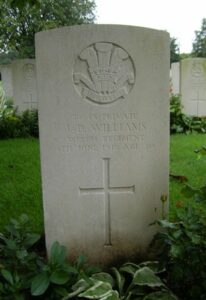 Richard Williams, Private, 35499, Royal Welsh Fusiliers. Richard was the son of David and Elisabeth Williams, of Penglanowen fawr, Llangwyryfon. He resided at 11, High Street, Peckham prior to the war, and enlisted in London on 17 April 1916 into the London Welsh Battalion, Royal Welsh Fusiliers. On 10 July 1916 Richard landed in France, and was amongst a batch of reinforcements posted to the 2nd Battalion, Royal Welsh Fusiliers. The battalion was at the time attached to 19 Brigade, 33rd Division, and Richard joined the battalion in time to take part in the Somme Offensive in the summer of 1916. On 5 November 1916, Richard was with B Company, 2nd RWF in the front line near Le Transloy, tasked with the capture of a strongly held ridge. The Company was hit in the flank by heavy machine-gun fire, and Richard was one of many men killed during the advance that day. He was 28 years old, and is commemorated on the Thiepval Memorial, France. 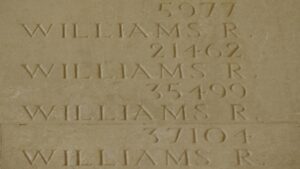 Daniel Lewis Davies, Chief Officer, Merchant Navy. Daniel was the son of John Davies, and of Mary Davies, of Llangwyryfon, and the husband of Martha Jane Davies, of Aberystwyth. He served with the Merchant Navy, as Chief Officer aboard the SS Lissa, a Glasgow registered Cargo Steamer. On 21 September 1941, she was on route from Barry and Milford Haven to Lisbon, carrying 2,100 tons of coal, when she was torpedoed and sunk by the German submarine U-201 with the loss of all of her crew of 26. Daniel was 35 years old when he died that day, and is commemorated alongside his shipmates on the Tower Hill Memorial, London. 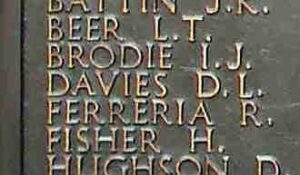 William Eilir Evans, Corporal, 6471528, Royal Fusiliers (City of London Regt). William was the son of William and Jane Evans, of Llangwyryfon. He served with the 2nd Battalion, Royal Fusiliers. In January 1943 the battalion moved to North Africa, after rebuilding following heavy losses during the retreat to Dunkirk in 1940. The battalion then took part in the Tunisian campaign. William was killed during the final offensive in Tunisia, on 29 April 1943. He was 26 years old, and is buried at Massicault War Cemetery, Tunisia.