Llanfihangel y Creuddyn is an ancient parish which lies about seven miles south east from Aberystwyth, on the road to Rhayader. The parish is situated on the rivers Ystwyth, Mynach and Rheidol, and is surrounded by unspoilt countryside. Although Llanfihangel y Creuddyn is widely regarded as being a ‘Thankful Village’, where none of its residents were killed during the Great War, but several men with local connections did in fact lose their lives. At least three of these men are commemorated on family gravestones within the churchyard at Saint Michael’s and at Llantrisant churchyard.

The church at Llanfihangel y Creuddyn does, in fact, contain a war memorial, sculpted by the renowned Belgian sculptor and artist, Monsieur Jules Bernaerts, a refugee who had come to Aberystwyth. He had spent some time soldiering back in Belgium and returned to Aberystwyth after the war where he completed his commission. The oak memorial panel, measuring six feet ten inches long and four feet ten inches broad, portrays the Lord’s Supper, and was installed as a Reredos inside the church as a symbol of peace. 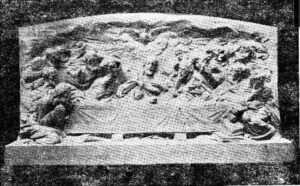 Godfrey Berkeley John Benyon, Lieutenant-Commander, Royal Navy. Godfrey was born on 10 September 1883, the son of Augustus William Benyon, R.N., and of Mary Beatrice Benyon, of Ashe, Windsor. His mother, formerly Beatrice Chambers, had been born and raised at Llanfihangel y Creuddyn on the Hafod Estate. Godfrey married Beatrice Lindley White, of 19, St. Mark’s Court, Abercorn Place, London, on 1 November 1911. He served with the Royal Navy aboard the Drake class armoured cruiser, H.M.S. Good Hope. On 1 November 1914, Good Hope was operating off South America with the 4th Cruiser Squadron, when the squadron came into contact with the German East Asia Squadron. The contact resulted in what is known as the Battle of Coronel. The British were desperately outgunned, and despite a gallant resistance, Good Hope was hit in the magazines, exploded and sunk with the loss of 919 men. Godfrey was 31 years old when he died that day, and is commemorated on the Portsmouth Naval Memorial, Hampshire. Godfrey left one son and posthumous daughter. He does not appear to be commemorated locally.

David Evans, Private, 534577, London Regiment. David was born in 1890, the son of Stephen and Jane Evans, of Rhosrydd, Devils Bridge. David worked as a Corn Merchant, and resided with his Grandparents in London prior to enlisting there into the 1/15th Battalion, London Regiment, which was known as the Civil Service Rifles. The battalion had moved to France in 1915, and was attached to 140 Brigade, 47th (2nd London) Division. The division fought at Loos in September 1915, and the following year fought in the Battle of the Somme. It fought in the Battle of Messines in the summer of 1917, before moving south to take part in the Battle of Cambrai. This is where David was killed on 30 November 1917, aged 27. He is buried in Point-Du-Jour Military Cemetery, Athies, France. David is commemorated on his parent’s grave at Llantrisant Chapel, Llanfihangel y Creuddyn. 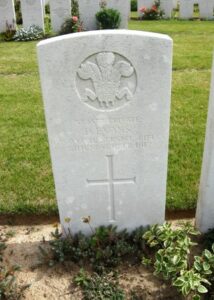 David Rees Griffiths, Sergeant, 15005, Royal Welsh Fusiliers. David was born at Llwynypia in 1893. He enlisted at Wrexham into the 10th Battalion, Royal Welsh Fusiliers, which was attached to 76 Brigade, 3rd Division. His battalion landed in France on 27 September 1915, joining the 3rd Division, which had been on the Western Front since the outbreak of war. The division moved from Ypres to the Somme the following year, and fought there at the Battle of Albert, and the Battle of Bazentin, where they captured Longueval. They then took part in the Battle of Delville Wood, and the Battle of the Ancre, before settling into another bleak winter in France. In May 1917 the Division was at Arras, and fought at the First and Second Battles of the Scarpe, and at the Battle of Arleux and the Third Battle of the Scarpe, where they captured Roeux. It was then moved back to Ypres, and fought in the Third Battle of Ypres, at the Battle of the Menin Road and the Battle of Polygon Wood. David was killed at Ypres on 26 September 1917, aged 24. He is commemorated on the Tyne Cot Memorial, Belgium. David is commemorated on his sister, Annie Rees Griffiths, grave at Llanfihangel y Creuddyn. 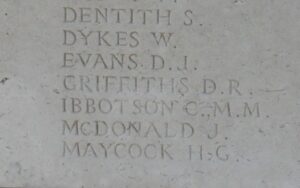 Thomas Hewitt, Private, 85638, Durham Light Infantry. Thomas was the son of James William Hewitt and Sarah Hewitt, of Bolton and the husband of Annie Hewitt, of 28, Breightmet Fold, Bolton. Thomas enlisted at Bolton into the army, and was posted to the 29th Battalion, Durham Light Infantry, which had formed at Margate on 1 June 1918. The battalion moved to France on 3 July 1918, to join 41 Brigade, 14th (Light) Division. The division had seen heavy fighting early in the year, and in the summer moved to Flanders. Thomas was killed during the advance in Flanders on 4 October 1918, aged 30, and is buried in Kandahar Farm Cemetery, Belgium. Thomas is commemorated on the grave of his wife Ann, who died on 30 July 1950, at Llanfihangel y Creuddyn. 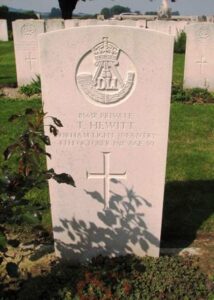 Joseph Turnley, Private, G/72592, Queen’s Royal West Surrey Regiment. Joseph was born at Llanfihangel y Creuddyn, the son of Joseph and Fanny Turnley. His father was a commercial traveller and by the end of the war lived at 5, Court Road, Horfield, Bristol. Joseph enlisted at Bristol into the Hertfordshire Yeomanry. He was then posted to France, and transferred to the 2/4th Battalion, Queen’s Royal West Surrey regiment, which was attached to 101 Brigade, 34th Division. Joseph was killed in action during the divisions advance west of Gheluwe on 8 October 1918, aged 19. He has no known grave, and is commemorated on the Tyne Cot Memorial, Belgium. Joseph does not appear to be commemorated locally. 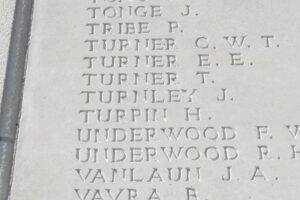 As can be seen above, all together at least five men with strong ties to Llanfihangel y Creuddyn are known to have died during the Great War. Only one of these was born in the parish, but he then went to live in Bristol. Three of the others are commemorated on graves in the parish, while one was the son of a woman from the parish.

Was Llanfihangel y Creuddyn named as a ‘Thankful Village’ just because it does not have a war memorial, or is it simply a village lacking a war memorial which it should have?