Llanfair Orllwyn is an ancient parish which is situated about four miles east of Newcastle Emlyn, overlooking the River Teifi. The parish church, which is dedicated to St. Mary, sits in an isolated position and contains a marble war memorial which commemorates its three parishioners who fell during the Great War. The photograph of the memorial has been kindly supplied by Ray Jones. 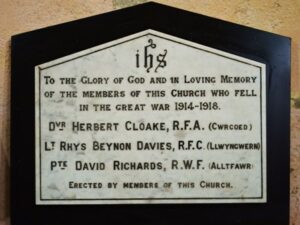 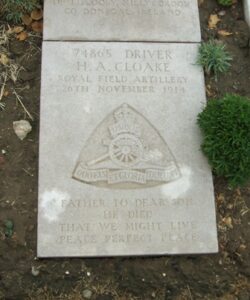 Rhys Beynon Davies, Second Lieutenant, Royal Flying Corps. Rhys was born on 15 May 1896, the son of James and Margaret Davies, of Llwyngwern, Henllan. He was educated at Aberbanc and at Llandyssul County School, before attending St George’s School in London, where he joined the Officer Training Corps. He was commissioned into the 4th Battalion, Northumberland Fusiliers on 5 August 1915, and landed in France on 14 March 1916, where he was attached to a Trench Mortar Battery. On 23 October 1916, Rhys was attached to 2 Squadron, Royal Flying Corps, as an Observer. He was wounded on 11 December 1916, while on patrol over Hulloch Wood, Loos. After a spell home recuperating, Rhys rejoined his Squadron in France on 23 February 1917. The Battle of Arras was launched the following month, and 2 Squadron flew many reconnaissance missions over the German lines, directing artillery fire onto key positions. On 1 May 1917, Rhys was flying as an Observer in an Armstrong Whitworth F.K.8., nicknamed the ‘Big-Ack’, biplane, Serial A9997, which was piloted by W.P. Eastwood, when they were attacked by German fighters. After a brief fight, the outmatched F.K.8. received a bullet in its fuel tank, which exploded, sending the aeroplane crashing to the ground. Rhys and his pilot were killed immediately. Rhys was 20 years old, and is buried at Monchy-Breton Churchyard, France. 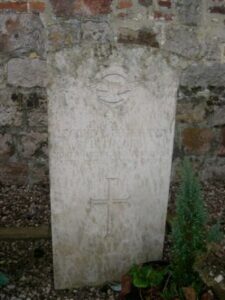 David Richards, Private, 16642, Royal Welsh Fusiliers. David was the son of Henry and Nancy Richards, of Aberbanc. He enlisted at Bronwydd into the 13th Battalion, Royal Welsh Fusiliers, which was attached to 113 Brigade, 38th (Welsh) Division. On 2 December 1915 the battalion moved to France, and the entire Division moved to the Fleurbaix sector, where it was initiated into trench warfare. During June 1916 the Division marched south to the Somme, and on 7 July 1916 attacked Mametz Wood. The initial attack failed, and it was three days later, on 10 July, that a fresh attack was mounted. After two days of heavy hand to hand fighting within the wood, the Germans withdrew, and the battered Welshmen moved via Hébuterne to Boesinghe, on the Yser Canal. David was badly wounded at Ypres on 1 July 1917, and died of his wounds late that day at the Casualty Clearing Station at Proven. He was 26 years old and is buried at Mendinghem Military Cemetery, Belgium. 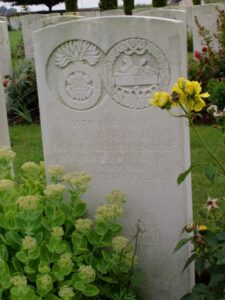