Capel y Graig is a Welsh Unitarian Chapel, situated in the centre of Llandyssul. The present building dates from 1883-4, was rebuilt in 1906, and was established by the ministers of Llwynrhydowen. Two marble War Memorials are located within the Chapel, which commemorate the members of the congregation who fell during both World Wars. Photographs of the memorials were kindly supplied by Mike Berrell. 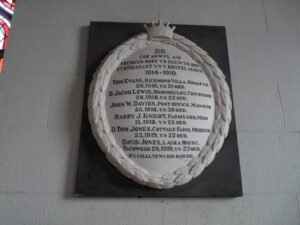 John William Davies, Pioneer, 317070, Royal Engineers. John was the son of David and Rachel Davies, of The Post Office, Felinfach. He had been born in Llanfihangel, and resided in Llandyssul prior to enlisting into the Royal Engineers at Lampeter. John was posted to the 35th Division Signal Company, which had moved to France in January 1916. They saw their first action during the Somme Offensive at the Battle of Albert. After a period of reorganisation they followed the German withdrawal to the Hindenburg Line in March 1917, and later in the year fought at the Battle of Passchendaele. Early in 1918 the Division were stationed in the area around Bapaume, and were caught there by the German Spring Offensive which was launched there on 21 March 1918. John was killed in action just days later, on 25 March 1918, aged 30. He has no known grave, and so is remembered on the Pozières Memorial, France. 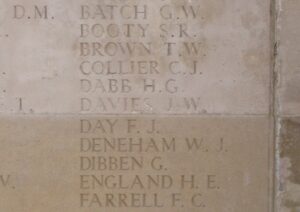 Tom Evans, Private, 53676, Welsh Regiment. Tom was born at Glanteifi, Llandyssul and later lived at Richmond Villa. He enlisted at Llanelli into the Pembroke Yeomanry, He later transferred into the 2nd Battalion, Welsh Regiment, which was attached to 3 Brigade, 1st Division. The Division had been one of the first to arrive in France, fighting at the Battle of Mons, and taking part in the retreat to the Marne, where the Germans were stopped. They then fought at the Aisne, and at Chivy, before being moved North to Ypres. Here they fought at the First Battle of Ypres, where they again stopped the German Offensive, before wintering in Flanders. The following year saw them in action again at the Battle of Aubers, before moving South to Loos, where they fought during the Battle of Loos, and the action at the Hohenzollern redoubt. Again they were required for a major offensive, moving South to the Somme, where they fought during the opening of the Somme Offensive at the Battle of Albert, then at Bazentin, Pozières, Flers-Courcelette and Morval. Tom was wounded on the Somme, after the Battle had been officially closed down, and sadly died of wounds on 29 December 1916. He is buried at St. Sever Cemetery Extension, Rouen, France. 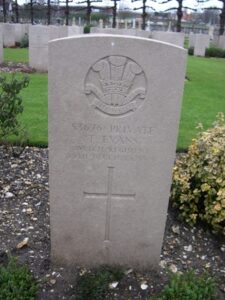 David Jones, Gunner, 262126, Royal Field Artillery. David was born on 24 January 1899, the son of David and Jane Jones, of 176, Fenton Road, Hanley, Stoke-on-Trent. He resided at Laura House, Pontwelly prior to the war, and worked as a waggoner. David enlisted on 22 January 1917, and served in the 5th Reserve Brigade, Royal Field Artillery, on home service. He died of tuberculosis on 28 February 1919, aged just 20, and is buried at Stoke-On-Trent (Hanley) Cemetery, Staffordshire. 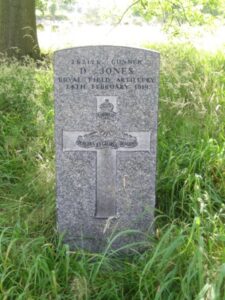 David Tom Jones, Private, 267137, Welsh Regiment. David was the Son of Elias and Mary Jones, of Aberythan, Gorrig, Llandyssul. He served in the 6th Battalion, Welsh Regiment, which had been attached to the 1st Division as Pioneers. Little else is known of him, but he died at home on 23 June 1919, aged 21. He is buried in Capelcwm Unitarian Chapelyard.

Harry Knight, Private, 38989, Welsh Regiment. Harry was born in Somerset. He resided at Farmyard, Llandyssul prior to the war, and enlisted at Newcastle Emlyn into the 2nd Battalion, Welsh Regiment. The Battalion formed part of 3 Brigade, 1st Division, which had had been one of the first to arrive in France. Harry probably joined the division on the Somme in 1916. The division followed the German retreat to the Hindenburg Line in early 1917, and were then briefed for an operation on the Flanders Coast, and moved there during the Summer of 1917. While training on the coast, the Battle of Third Ypres had stalled in the mire, and the Division were recalled to Ypres, where they fought at the Second Battle of Passchendaele. After spending another winter in Flanders, they were near Estaires when the German Spring Offensive caught them, fighting through the Battles of Estaires, Hazebrouck, and Bethune before being moved South again to Arras, fighting at the Battle of Drocourt-Queant, and at the Battle of Épehy, after the tide had been turned in the favour of the Allies. The Division pushed on towards the St. Quentin Canal. Harry was killed in action during the advance on the Hindenburg Line on 15 September 1918, and is buried at Vadencourt British Cemetery, Maissemy, France. 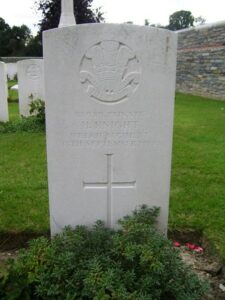 David Jacob Lewis, Second Lieutenant, Royal Fusiliers. David was the Son of David and Anne Lewis, of Bronheulog, Llandyssul. He enlisted into the 2nd Battalion, Royal Fusiliers, which were attached to 86 Brigade, 29th Division. The Division moved to Gallipoli via Egypt, landing on 25 April 1915. They remained here until evacuation to Egypt on 11 January 1916 and then moved to the Western Front on 15 March. The Division took part in its first major action in France during the 1916 Somme Offensive, and fought at the Battles of Albert and Le Transloy, suffering heavy casualties. David was killed in action on the Ancre during the winter of 1916/17, on 28 February 1917, aged only 22. His body was lost on the battlefield, and so he is remembered on the Thiepval Memorial, France. 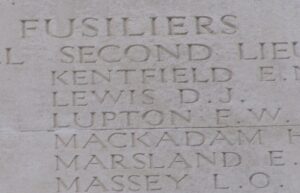 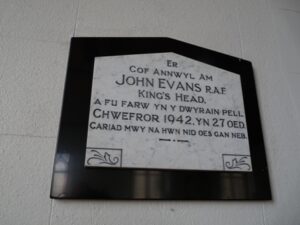 John Evans, Leading Aircraftman, 982547, Royal Air Force Volunteer Reserve. John was the Son of Sarah Evans, Kings Head Hotel, Llandyssul. He was stationed at RAF Singapore at the beginning of World War Two, and was sadly killed during the Japanese Invasion of the Island on 14 February 1942. John has no known grave, and so is remembered on the Singapore Memorial, Kranji. 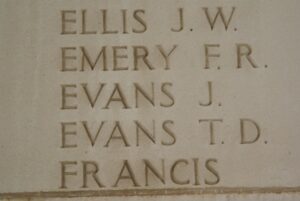