Llanddeiniol is a parish which lies about seven miles south-west of Aberystwyth, just half a mile off the main A487 coastal road mid-way between Llanrhystud and Blaenplwyf. The parish takes its name from the dedication of its church to St. Daniel, which is situated on the shore of Cardigan bay. The men of the Parish who fell during both World Wars are commemorated on two marble plaques, which are located in the Church, together with a third plaque, which commemorates the parishioners who also served and returned during the Great War. 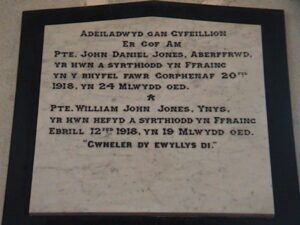 John Daniel Jones, Private, 25095, Duke Of Wellington’s (West Riding Regiment). John was the son of Daniel and Catherine Jones, of Aberffrwd House, Llanddeiniol. He enlisted at Aberystwyth on 13 December 1915 into the Army Service Corps. John then served with the Training Reserve, until being posted to France on 14 May 1917, joining the 2/5th Battalion, West Riding Regiment, which was attached to 186 Brigade, 62nd (2nd West Riding) Division. John would have seen his first major action during the Battle  of Arras that year. Later that year saw them in action again at the Battle of Cambrai, and John was wounded here on 27 November 1917. On 5 January 1918, the Division took over the front line in the Arras area, but after the Germans launched their offensive on the Somme on 21 March 1918, was moved to Bucquoy, between Arras and Albert, where it took part in heavy fighting. The battered division was relieved on the night of 31 March, and was moved south when the Germans launched an offensive in the Champagne region, near Rheims. John rejoined his battalion on the Aisne on 5 June 1918, after recuperating in hospital at Rouen. He was killed in action here on 20 July 1918. He was 24 years old, and is buried in Courmas British Cemetery, France. 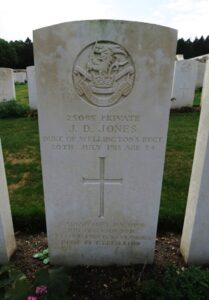 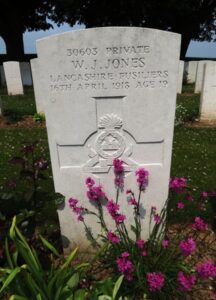 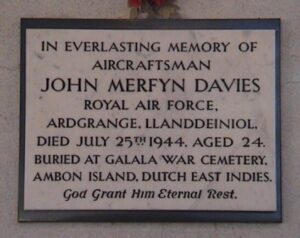 John Merfyn Davies, Aircraftman 1st Class, 1255308, Royal Air Force Volunteer Reserve. John was the son of John Evans Davies and Ellen Davies, of Ardgrange, Llanddeiniol. He served with 100 Squadron, Royal Air Force, which was equipped with the obsolete Vickers Vildebeest. The Squadron took part in the defence of Singapore in December 1941, but most of its personnel were captured by the Japanese after the surrender of the garrison. John was interred at Batoe-Doeah-Ambon, Dutch East Indies, and died there on 25 July 1944, aged 24. He is buried at Ambon War Cemetery, Indonesia. 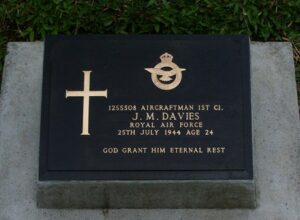 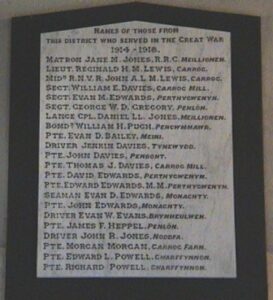