Henllan is situated off the A484 Cardigan to Carmarthen road, around three miles east of Newcastle Emlyn. The village is the site of a Second World War Italian POW camp, and is also the centre for the Vale of Teifi Railway Preservation Society. There are several war memorials locally, but this page commemorates the men on the memorial which until recently was installed inside Eglwys Dewi Sant. The Church is presently locked up and has fallen into disrepair, so the memorial has been removed and is now displayed by the base of the Aberbanc Memorial. The photograph of the memorial was kindly sent in by Sue Wright. 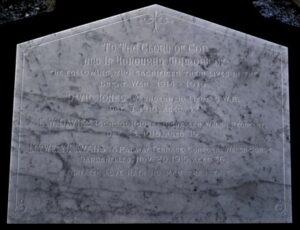 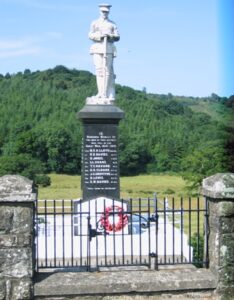 Evan William Davies, Private, 65352, Welsh Regiment. Evan was the son of Ebenezer and Mary Davies, of School House, Henllan. He enlisted at Carmarthen into the army on 1 November 1916, and was posted to France on 7 April 1918, where he joined the 2nd Battalion, Welsh Regiment.  The battalion had been on the Western Front since the outbreak of war, attached to 3 Brigade, 1st Division, and had fought in almost every major battle thereafter. After spending the Winter in Flanders, the Division was near Estaires when the German Spring Offensive caught them, fighting through the Battles of Estaires, Hazebrouck, and Bethune before being moved South again to Arras to rebuild. From here, the 1st Division took part in the great offensive, which was to ultimately win the war, fighting at the Battle of Drocourt-Queant and at the Battle of Épehy during August and September 1918. The Division pushed on towards the St. Quentin Canal, and after crossing the Hindenburg Line fought at the Battles of Beaurevoir, the Selle and the Sambre. Evan was killed at the Sambre on 23 October 1918. He was 19 years old, and is commemorated on the Vis-En-Artois Memorial, France. 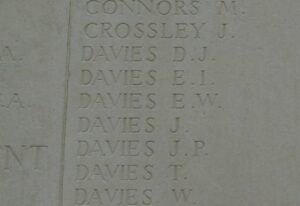 Phillip Lloyd Elliott, Second Lieutenant, Duke of Cornwalls Light Infantry. Phillip was the second son of Gilbert Lloyd Elliot, of the Duke of Cornwalls Light Infantry and the 13th Hussar, and of Mrs. Lloyd Elliot, Dolhaidd Mansion, Henllan. He was educated at Cheltenham College and Sandhurst, before being gazetted in August 1914, into the 1st Battalion, Duke of Cornwalls Light Infantry. The battalion moved to France at the outbreak of war attached to 14 Brigade, 5th Division, and landed at Havre on 15 August 1914. Phillip fought at the Battle of Mons, and during the retreat south, fighting at Le Cateau, then down to the Marne where the German attack was halted. The Division took part in the advance to the Aisne, before moving to Flanders, where they fought at the Battle of La Bassée, then at Messines in October 1914. Phillip was killed in action in Flanders on 21 October 1914. He was 19 years old, and is buried at Guards Cemetery, Windy Corner, Cuinchy, France. His brother T.G.L. Elliot also served. Phillip does not seem to be commemorated locally. 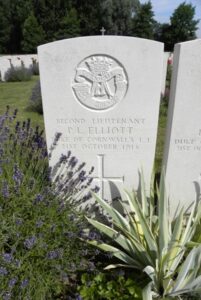 Llewellyn Evans, Lance Corporal, 136, Welsh Horse. Llewellyn was born at Cenarth in 1880, the son of David and Anne Evans. He married in 1904, and resided with his wife Mary Evans at 8, Railway Terrace, Henllan. Llewellyn was a veteran, who had served during the Boer War, and he enlisted at Henllan into the 1/1st Battalion, Welsh Horse Yeomanry, which was originally raised as a Welsh Cavalry unit. Around February 1915 the Welsh Horse joined the 1/1st Eastern Mounted Brigade, 1st Mounted Division in Woodbridge area, but in September 1915 dismounted and sailed from Liverpool in the SS Olympic on 25 September, landed at Anzac, where it became attached to the 54th (East Anglia) Division. The Welsh Horse were used as tunnellers on Gallipoli, and it was while working on a tunnel that Llewellyn was killed, when the Turks blew a mine on 20 November 1915. Llewellyn was buried at 7th Field Ambulance Cemetery, Gallipoli, alongside two of his comrades who died alongside him, Llewellyn Jones of Llangeler, and W.C. Lewis of Carmarthen. 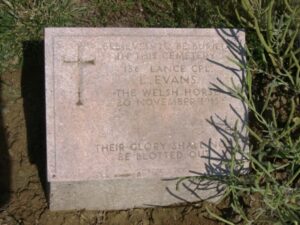 David Jones, Second Lieutenant, South Wales Borderers. David was the son of Henry and Margaret Jones, of Waunderwen, Henllan. He had been a Grocer prior to the war, and had then worked for the G.W.R. before enlisting into the Royal Army Medical Corps. David had served in France from 22 November 1915, working his way up to Sergeant, before he was commissioned into the 3rd Battalion, South Wales Borderers on 26 June 1917 after being selected for Officer Cadet Training late in 1916. He married Annie Williams, the daughter of David and Martha Williams, of 55, St. Helen’s Road, Swansea, while on leave on 20 December 1917. David then returned to France to join the 10th Battalion, South Wales Borderers, which was at Armentieres. The battalion was attached to 115 Brigade, 38th (Welsh) Division, and by April 1918 had moved to positions facing Aveluy Wood, north of Albert, on the Somme. On 21 August 1918 the division launched its assault across the River Ancre, and began driving the Germans back over the old Somme battlefield of 1916. It then moved towards the Canal du Nord and the mighty Hindenburg Line, taking part in the 100 days offensive which ultimately won the war. David was killed in action on 8 October 1918 during the assault on Villers-Outréaux, during the same action in which CSM John Henry Williams, DCM, MM, of the same battalion was awarded the Victoria Cross. David was 32 years old, and is buried in Guizancourt Farm Cemetery, Gouy, France. 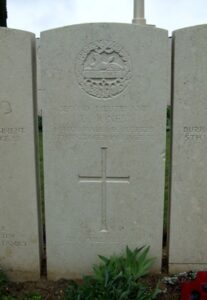 Price Vaughan Lewes, Captain, Royal Navy. Price was born on 27 February 1865 at Llanfear, Felinfach, Cardiganshire, to Colonel John and Mary Jane Lewes. At the tender age of 13, Price joined the Royal Navy, serving aboard the training ship HMS Britannia, under Captain E. Kelly. On 23 July 1880, Price was posted to HMS Achilles, and just two months later, at the age of 15, he was promoted to Midshipman. During August 1893, Price had been promoted to Lieutenant, and was the third most senior officer aboard HMS Blanche, which was stationed at Zanzibar. He gained the award of the Distinguished Service Order for his gallantry here. On his return home, Price married his fiancée, Anne Josephine Tulloch at Chester, on 30 April 1894, and a year later, Anne gave birth to their son Martyn Tulloch Vaughan Lewes. From this period onwards, the family often came to Laugharne when Price was on shore leave, spending their time relaxing at Hillside, the home of his friend Samitt Willimott and his family. Price became very well known in Laugharne, which had become a haven for high-ranking military officers at this time. By 1897, Price had gained command of the newly launched gunboat HMS Hazard, and took part in a Victoria Cross action at Crete. For his fine leadership in this affair on Crete, Price was promoted to Commander, by order of Her Majesty Queen Victoria. On 30 June 1905, Price was promoted to Captain in the Royal Navy, and afterwards took command of the Battleship HMS Superb, which was launched in 1909. The Superb was a Bellerophon Class Dreadnought Battleship, with a main armament of ten 12″ guns. During 1913 Price received the CB as part of the King’s Birthday Honours, to go with his Distinguished Service Order, and his Africa General Service Medal with Juba River Clasp. At the outbreak of the Great War, HMS Superb was part of the British Home Fleet. Due to the outbreak of hostilities, the Royal Navy reorganised its fleets, and the Superb became part of the 4th Battle Squadron of the Grand Fleet, which was commanded by Admiral Sir John Jellicoe aboard HMS Iron Duke. Price was on sick leave in Laugharne, but promptly resumed command of his ship HMS Superb. At the beginning of November 1914, Price was invalided to Devonport Naval Hospital, where he sadly died at the age of 49, on 10 November 1914. He lies buried in the Plymouth (Western Mill) Cemetery, Devon. His son Martyn was killed in France in 1916. 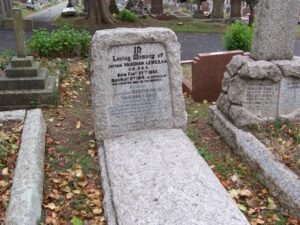