Goginan is situated about five miles east of Aberystwyth on the A44, a mile from Capel Bangor. The men of the parish who fell during both World Wars are commemorated on a war memorial at St. David’s Church, Capel Bangor, which was moved there following the closure of St. Mathew’s Church in 1999, while the two men who worshipped at Jezreel Chapel are also commemorated on a marble plaque which was once located in the Chapel.  Jezreel Chapel was locked to the public in 1990 with the intentions of converting it into a dwelling, but has lain empty ever since. 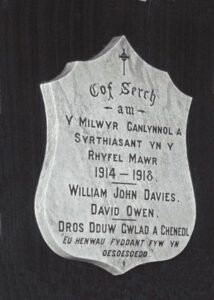 William John Davies, Private, 17280, South Wales Borderers. William was the son of James and Margaret Davies, of Cwmerfin Cottage, Cwmerfin, Bow Street, and the husband of Maggie Davies, of Hyfrydle, Goginan. He enlisted at Newport, Monmouth into the 6th Battalion, South Wales Borderers, which was attached to the 25th Division, as the Divisional Pioneers. The Division landed in France on 26 September 1915, and was posted to the Vimy area, where it defended Vimy Ridge against a German attack in May 1916. It then moved to the Warloy area to take part in the Somme offensive and launched its first assault near Thiepval on 3 July. The division remained on the Somme for the remainder of the battle, and the 6th SWB were kept busy throughout this time. William was killed while working on roads near Blighty Valley, Authillle on 3 October 1916. He was thirty four years old, and is commemorated on the Thiepval Memorial, France. 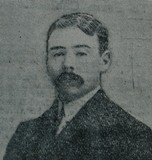 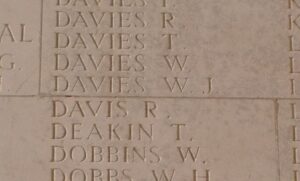 David Owen, Private, 70072, Royal Welsh Fusiliers. David was born in 1892, the son of Richard and Ann Owen, of Gellifadog, Capel Bangor. He enlisted at Aberystwyth into the army, and at some time at the end of 1917 was posted to France, joining the 9th Battalion, Royal Welsh Fusiliers, which was attached to 58 Brigade, 19th (Western) Division. On 21 March 1918 the Division was caught up in the German Spring Offensive north of St. Quentin, suffering terrible casualties during the retreat towards Bapaume. The battered Division moved to Messines to rebuild, but were caught up in the German attack at Messines the following month, fighting a terrible rearguard action over the following days, before being moved to a quieter sector on the Aisne to rebuild. Unfortunately this is where the Germans had decided to launch their last ditch effort to break the Allied lines, and the Division was again caught up in terrible fighting. David was wounded in the head around this time, and after treatment in France returned to hospital in Weymouth. David died after the armistice, on 30 November 1918, aged twenty six. He is buried at Goginan (Jezreel) Welsh Baptist Chapelyard.