Eglwysfach lies in the most northerly parish of Ceredigion, along the A487 road from Aberystwyth to Machynlleth, south of the River Dovey, some twelve miles north of Aberystwyth. It’s church is dedicated to St Michael, and outside the church, above the lychgate, is a war memorial to the fallen of the parish from both world wars, which sadly contains no names. This war memorial was unveiled by Lady Webley Parry Pryse on Friday afternoon, 23 April 1920, taking the form of a Celtic cross with crusaders sword, in Cornish granite.  The service was conducted by Rev Lewis Richards vicar of the parish at the time. Inscribed on the cross, which was crafted by Mr T Hughes, of Machynlleth, were the words (In Welsh) “To the glory of God. A Thank offering for the return of those who fought in the Great War 1914-1918 and in grateful remembrance of those who gave their lives for their king and country. Their name liveth for evermore”. The memorial was amended to include the men of WW2, but again no names were added. However, two local men are buried in the churchyard, and another was killed in France, so details of these men are shown below. If anyone has evidence of any other men who should be on this page, please contact me. 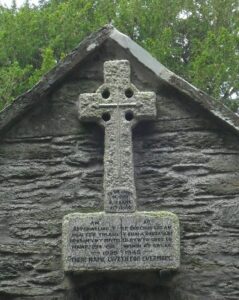 Owen Humphreys, Private, 10019, King’s Shropshire Light Infantry. Owen was born at Towyn, the son of David and Mary Ann Humphreys. After his father’s death in 1905, the Owen moved to Furnace Cottage, Eglwysfach to live with his Aunt, Annie Hughes. He worked as a collier at Treharris prior to enlisting into the 1st Battalion, King’s Shropshire Light Infantry, and landed with the battalion in France on 10 September 1914, where it was attached to 16 Brigade, 6th Division. Owen was wounded at some time, and after recovering was posted to the 2nd Battalion, KSLI, sending home a series of vivid letters, detailing his experiences at war. By the beginning of 1918 he had been wounded four times, and returned home on leave to recuperate. On 15 June 1918 Owen was joined by a friend from the 2nd KSLI who was also on leave, and the pair borrowed two bicycles to ride into Aberystwyth. Owen crashed his cycle on a bend at Llanbadarn, and sustained injuries which caused him to die in hospital later that day. He was 22 years old, and was buried with full military honours in Eglwysfach (St. Michael) Churchyard.

William Jones, Lance Corporal, 463103, Canadian Infantry. William was born on 18 February 1883, the son of Thomas and Margaret Jones, of Plasmawr, Eglwysfach. After the death of his father prior to 1893, his mother married James Andrew. William emigrated to Canada prior to the war, where he found work as a miner. William had served with the Militia before enlisting under a false age at Vernon, British Columbia on 23 July 1915 into the Canadian Infantry. He was posted to France, joining the 123rd Pioneer Battalion (Royal Grenadiers), Canadian Infantry. On 6 November 1917 William was with a working party which had been detailed to carry out work on the Gravenstafel Road in support of the Canadian assault on Passchendaele. He was found to be missing after the men returned to their billets, and was posted as missing presumed killed in action. William was 34 years old when he died that day, and is commemorated on the Ypres (Menin Gate) Memorial, Belgium. 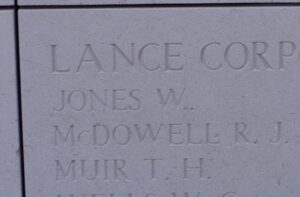 Thomas Mathews, Driver, 42228, Royal Field Artillery. Thomas was probably the son of David and Margaret Mathews, of Furnace, Glandyfi. He was a collier prior to enlisting into the Royal Artillery on 28 February 1906, and had served in India prior to returning to England. He was posted to the Middle East with the 63rd Battery, Royal Field Artillery late in 1914. He served with the battery during its move from Egypt into Mesopotamia, as part of the relief force which was attempting to relieve the besieged garrison of Kut-al-Amara. Thomas was taken prisoner by the Turks, and died on the march from Baghdad on 31 August 1916, aged 26. He is commemorated on the Basra Memorial, Iraq.

James Henry Griffiths, Lance Corporal, 3965599, Welch Regiment. James was the son of Thomas Edward and Mary Elizabeth Griffiths, of Tregynon. He served with the 1/5th Battalion, Welch Regiment, which was attached to the 53rd (Welsh) Division. The division spent the early years of the war on home service, especially in Northern Ireland, before landing in Normandy at the end of June 1944. James didn’t see active service though, as he died at Sittingbourne on 7 June 1943, aged 23, and was brought home to be buried in Eglwysfach (St. Michael) Churchyard.