Cwmystwyth is situated on the B4574, about twelve miles east of Aberystwyth, in the heart of an old mining community. The men of the village who fell during the Great War are commemorated on two memorials within the village, a carved oak screen at Eglwys Newydd Church, and a single marble plaque at Capel Siloam. Eglwys Newydd Church is situated on the Hafod Estate and is dedicated to St Michael and All Angels. The church, more usually referred to as Hafod Church, is the second on the estate and was built by Thomas Johnes who inherited the estate in the late 18th century. Following a fire in 1932 which destroyed much of its interior the church was rebuilt. Sadly Sir Francis Chantrey’s memorial to Marianne, Thomas Johnes’ only daughter, who had died tragically at a relatively young age, was damaged beyond repair. The names of the fallen are carved on the oak screen which surrounds the remains of the sculpture. 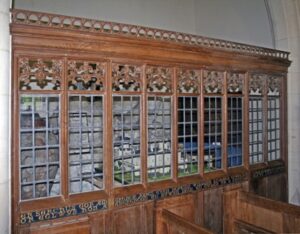 William Richard Edwards, Private, M/349143, Army Service Corps. William was the son of Richard and Winifred Edwards, of Beaufort House, Cwmystwyth. He enlisted at Aberystwyth into the Army Service Corps, and was posted to a Motor Transport Company, Army Service Corps. William served on home service. He was on his way home on leave when he was recalled by his unit, but shortly after contracted a chill and died of pneumonia on 13 April 1918, aged 21. His body was brought by train to Strata Florida and conveyed by road to Cwmystwyth where he was buried in Eglwys Newydd (or Hafod) Churchyard.

William Foster, Sergeant, 14211, South Wales Borderers. William was born at Islington, London. He lived at Cwmystwyth for some time prior to the war, and enlisted at Aberystwyth into the army. He was posted to the 2nd Battalion, South Wales Borderers, which was at Gallipoli, attached to 87 Brigade, 29th Division. William remained with the battalion for the duration of the Gallipoli campaign, and moved to France with it 15 March 1916. The division launched a suicidal attack on Y-Ravine during the opening day of the Battle of the Somme, which saw the 2nd SWB decimated. William survived the attack, and would have fought with the rebuilt battalion during the latter stages of the battle. During 1917 the division fought at the Battle of Arras, and at the Third Battle of Ypres, before moving south to take part in the Battle of Cambrai. William was killed in action there on 8 December 1917. He is buried in Flesquières Hill British Cemetery, France. He does not appear to be commemorated anywhere locally. 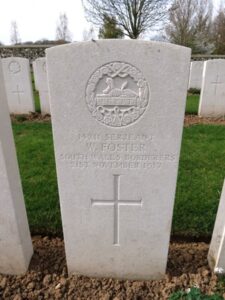 Gilbert Gamman, Second Lieutenant, Wiltshire Regiment. Gilbert was the son of Henry and Isabella Mary Gamman, of Bishops Way, Andover, Hampshire. His father was the owner of Kingside Mine, Cwmystwyth. He also owned a large farm in Andover, so Gilbert trained in farming methods with Mr Lyke at Lodge Farm, Crosswood prior to moving to the family estate. He was commissioned into the army on 18 November 1914, and was posted to the 5th Battalion, Wiltshire Regiment, which was attached to 40 Brigade, 13th (Western) Division. On 1 July 1915 the division sailed from Avonmouth for Gallipoli. It landed at Cape Helles on 17 July but moved to Anzac cove area 4 August 1915. Gilbert was killed in action here during the Turkish assault on 10 August 1915. He was 21 years old and is commemorated on the Helles Memorial, Gallipoli. His brother Edward also fell, although neither brother is commemorated locally. 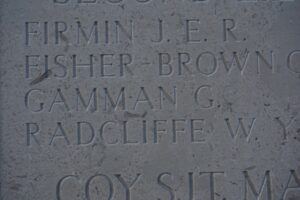 Edward Gamman, Second Lieutenant, Royal Garrison Artillery. Edward was the son of Henry and Isabella Mary Gamman, of Bishops Way, Andover, Hampshire. His father was the owner of Kingside Mine, Cwmystwyth. Edward had been educated at the Royal School of Mines prior to the war, and enlisted into the Royal Garrison Artillery, training as a gunner. He was commissioned on 3 August 1916 and spent four months at Landguard Fort in Suffolk before being posted to the 306th Siege Battery, Royal Garrison Artillery on 2 April 1917. He was killed near Passchendaele while acting as forward observation officer on 26 October 1917, aged 27. Edward has no known grave and is commemorated on the Tyne Cot Memorial, Belgium. His brother Gilbert also fell, although neither brother is commemorated locally.

Evan Jones Hopkins, Private, 26560, South Wales Borderers. Evan was the son of William and Jane Hopkins, of Tycoch, Pontrhydygroes, Ystrad Meurig. He had been born at Ysbytty Ystwyth, and enlisted at Aberystwyth into the South Wales Borderers. Evan was posted to Egypt in 1916, joining the 4th Battalion, South Wales Borderers, which was attached to 40 Brigade, 13th (Western) Division. On 12 February 1916 the Division began to move to Mesopotamia, to strengthen the force being assembled for the relief of the besieged garrison at Kut al Amara. Evan was wounded during operations around Baghdad, and died on 28 March 1917, aged 23. He is buried at Amara War Cemetery, Iraq.

Arthur Jones, Private, 14213, South Wales Borderers. Arthur was the son of William and Anne Jones, of Llanarth Villa, Llanarth. He resided at Pencuwch Shop Cwmystwyth with his uncle and aunt John Morgan Jones and Winifred Jones prior to the war. Arthur enlisted at Aberystwyth into the 4th Battalion, South Wales Borderers, which was attached to 40 Brigade, 13th (Western) Division. On 15 June 1915 the Division sailed from Avonmouth for Mudros. The Division landed at Anzac, Gallipoli on 5 August 1915, and took part in heavy fighting in the coming days. In December 1915 the Division left Gallipoli for Egypt, before moving into Mesopotamia in February 1916. Arthur took part in the operation to relieve General Townsend’s besieged garrison at the city of Kut, but was killed in action on 9 April 1916, He was just 18 years old, and is buried at Amara War Cemetery, Iraq.

John Jones, Private, 24672, Welsh Regiment. John was the son of Cornelius and Elizabeth Jones, of Cwmystwyth. He enlisted at Ynysybwl into the army, and was posted to France on 22 April 1915, joining the 2nd Battalion, Welsh Regiment, which was attached to 3 Brigade, 1st Division. John would have seen his first action in Flanders, during the latter stages of the Battle of Aubers Ridge. Later in the year the division made an assault on the Hohenzollern Redoubt, during the Battle of Loos. John was killed in action here on 7 October 1915, aged 39. He is buried in Loos British Cemetery, France. John does not appear to be commemorated anywhere locally. 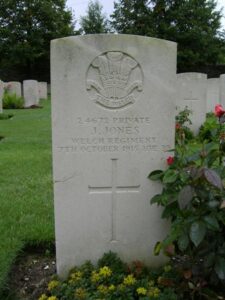 John Thomas Morgan, Gunner, 137872, Royal Field Artillery. John was the son of James Richard Morgan and Annie Morgan, of Brunant Cottage, Cwmystwyth. He enlisted at Aberystwyth into the Royal Field Artillery, and was posted to India early in 1917, destined to join the 66th Brigade, Royal Field Artillery. John became ill on the journey east, dying of enteric fever in Amara Hospital, Mesopotamia on 5 April 1917, aged 29. He is buried in Amara War Cemetery, Iraq. John is not commemorated on the memorial inside Eglwys Newydd, but on a separate plaque inside Capel Siloam, at Cwmystwyth. (See below).

Sir Godfrey Vignoles Thomas, CB, CBE, DSO, MID, Brigadier-General, Royal Artillery. Godfrey was born at Hafod on 27 March 1856, the son of Sir Godfrey John Thomas, 8th Bart., and Lady Thomas. He married Mary Frances Isabelle Oppenheim on 30 April 1887. Godfrey was Deputy Lieutenant of Essex prior to the war, and had commanded the 24th Division Artillery during the war. He died on 17 February 1919, aged 62, and is buried in Harlow (St. Mary) Churchyard. 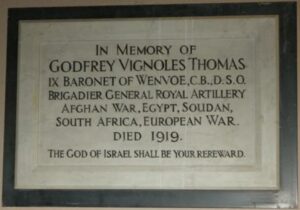 David James Davies, Engineman, LT/KX 133261, Royal Naval Patrol Service. David was the son of John and Elizabeth Davies, of Ffynnongarreg Brongwyn, Llandygwydd, Cardiganshire. He married Eiddwen Thomas of Cwmystwyth in 1941. David served with the Royal Naval Patrol Service during the war, and was based at HMS Europa at Lowestoft towards the end of the war. David became ill and died of cancer on 22 November 1945, aged 39. He is buried in Eglwys Newydd Churchyard. His widow Eiddwen and their son lived for a while with David’s brother at Golygfor, Crymych, Pembrokeshire, before moving to London and finally Kent, where she died in 2012. 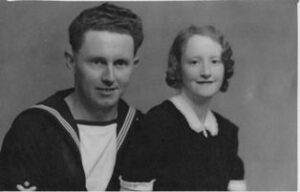 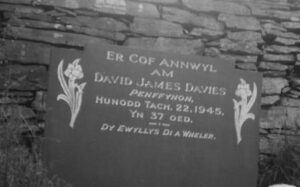