Cwmtydu is a small village situated on the picturesque Cardigan coast, between Llangrannog and New Quay, overlooking Cardigan Bay. The Parish Church, dedicated to St Tyssilio, contains three memorial plaques; one to the Parishioners who fell during World War Two, one to Sister Grace Evans, and one to Captain J. A. Jones. Many thanks to Mike Berrell for the photographs of the memorials.

Grace Evans, Sister, Queen Victoria Hospital. Grace was born in 1879, the daughter of Francis and Mary Evans, and the sister of Francis Evans, of Llwyndafydd, and the wife of Captain William Nott. She was a Nurse, and had served at Queen Victoria Hospital during the Great War, treating men who had been wounded or become ill during the campaign in German East Africa. Grace survived the war, but it took a heavy toll on her health, as she died at Johannesburg on 16 November 1930. The plaque below is in St Tysilio Church. 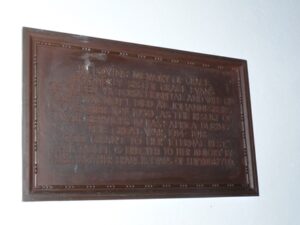 James Arthur Jones, MID, Captain, South Wales Borderers. James was the Son of the Rev. James Jones (late Vicar of Llandebie) and of Mrs. Jane Jones, of Hill Cottage, Heywood Lane, Tenby. He served in the 10th Battalion, South Wales Borderers, part of 115 Brigade, 38th (Welsh) Division. In the summer of 1915 the Battalion moved with the remainder of the Welsh Division to Morn Hill Camp, Winchester, where it completed its training and equipping, and embarked for France from Folkestone on 5 December 1915, disembarking at Boulogne the same day. During the winter and spring of 1916 the Battalion held the line in French Flanders, and then moved south to the Somme, where they fought at Mametz Wood. After a year in reserve, they fought at Pilckem Ridge and Langemarck in Third Ypres, and were back on the Somme in 1918 facing the German Offensive. After playing a leading role in pushing the Germans back in late 1918, James was killed in action on 8 October 1918 during the Battle of Cambrai. He is buried in Guizancourt Farm Cemetery, Gouy, France. There is a brass plaque in his memory at St Tysilio Church. 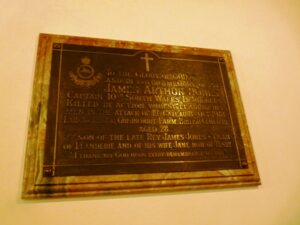 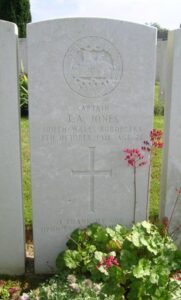 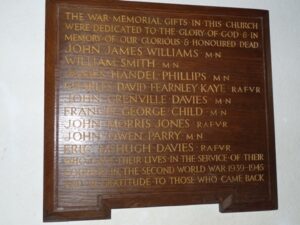 Francis George Child, Ordinary Seaman, Merchant Navy. Francis was the son of William John Child, and of Elizabeth Jane Child, of Penygroes. He served with the Merchant Navy, aboard the MV British Vigilance, a London registered Motor Tanker. On 3 January 1943 she was on route from Curacao via Trinidad to Gibraltar in Convoy TM-1, with a cargo of 11,000 tons of petroleum products, when she was torpedoed by German submarine U-514 about 900 miles NE of Barbados. The surviving crew abandoned her, leaving 27 of their fellow crewmen dead aboard her. Francis was killed during the initial torpedo hit. He was 24 years old, and is commemorated on the Tower Hill Memorial, London. The burning tanker drifted for three weeks, before being finally sunk by the German submarine U-105. 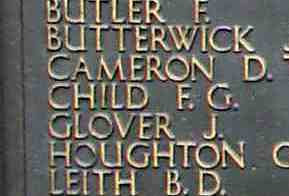 Eric McHugh Davies, Flight Sergeant (Air Gunner), 935690, Royal Air Force Volunteer Reserve. Eric resided at Glanydon, Cwmtydu. He served as an Air Gunner with 35 Squadron, Royal Air Force, which was an elite pathfinder unit, forming part of No. 8 Group at RAF Graveley, equipped with the Avro Lancaster. On the night of 4 July 1944, Eric took off from Graveley aboard Lancaster ND846, which crossed the Channel before heading towards the squadrons target of the railroad marshalling yards at Villeneuve-Saint-Georges, France. Eric was killed along with his crew when his Lancaster was lost over France on 5 July 1944. He is buried at Clichy Northern Cemetery, France.

John Grenville Davies, Sailor, Merchant Navy. John was the son of Evan and M. J. Davies, and the husband of Eryl Davies, of Llandyssul. He served with the Merchant Navy aboard the M.V. St. Merriel, a Newport registered ship. On 2 January 1943, St. Merriel was in Bone Harbour when the harbour came under attack from enemy aircraft. John was killed during the attack that day. He was 22 years old, and is commemorated on the Tower Hill Memorial, London.

John Morris Jones, Sergeant, 650138, Royal Air Force. John was the son of John Oswald Jones and Achsa Ellen Jones, of Tiresgob, Synod Inn. He served with 467 Squadron, Royal Air Force, which was a heavy bomber squadron, equipped with the Avro Lancaster. The squadron took part in all the major Bomber Command campaigns against Germany and German-occupied Europe; the Ruhr, Hamburg, and Berlin, and took part in the first shuttle-bombing raids when, after attacking Friedrichshafen on 20/21 June 1943, it flew to North Africa and on the return flight bombed Spezia, the home of the Italian Navy. Just before 21.00 on 23 August 1943 John took off from RAF Bottesford aboard Lancaster III, Serial JB124, which had been despatched as part of a large force to bomb Berlin. The Lancaster failed to return the following day and all of her crew of seven were recorded as missing presumed killed. John was 29 years old and is commemorated on the Runnymede Memorial, Surrey.

Charles David Fearnley Kaye, Pilot Officer (Pilot), 110881, Royal Air Force Volunteer Reserve. Charles was the son of Eric Fearnley Kaye and Vida Louise Kaye, of Llwyndafydd. He was educated at Radley College and was commissioned as a Pilot Officer on 8 November 1941. Charles was killed on active service when his Douglas Boston I, Serial AE457 of 51 OTU crashed on take-off at Cranfield on 12 February 1942. He was 20 years old, and is buried at Llandyssiliogogo (Ss. Tyssilio and Mark) Churchyard.

John Owen Parry, Seaman, Merchant Navy. John lived at Rhiwnant, Nanternis, New Quay. He served with the Merchant Navy as a Greaser aboard the M.V. Caleb Sprague. John fell overboard and drowned whilst Caleb Sprague was docked in London on 24 January 1944, aged 40. Nothing further is known of him as he is not commemorated by the CWGC.

James Handel Phillips, Able Seaman, Merchant Navy. James was born on 19 February 1911, the son of David and Elizabeth Phillips, of Synod Factory, Cross Inn. He enlisted into the Merchant Navy and was posted aboard the MV Dunedin Star, a London registered refrigerated cargo liner which had been built by Cammell Laird for the Blue Star Line to ship frozen meat from Australia and New Zealand to Britain. She carried on in that capacity following the outbreak of war. By August 1941, Dunedin Star was in Britain and was selected to take part in Operation Halberd, a convoy which was to relieve the siege of Malta by supplying the island by sea. On 17 September Dunedin Star left the Clyde with another vessel and attached to Convoy WS 011D, which at sea became Convoy WS 11X, bound for Bombay. The ships for Operation Halberd then detached in the North Atlantic to enter the Mediterranean and reached Gibraltar on 24 September. There eight merchant ships formed Convoy GM 2, which left the same day under escort for Malta. On 27 September 1941, the convoy was attacked by a squadron of Italian aircraft, but were beaten off by anti-aircraft fire from the escorting RN ships. James had been badly wounded, fracturing his right tibia and fibula, during the attack and when the convoy reached the Southern Harbour in Malta on the following day, 28 September 1941, he died of shock brought about by his injuries. The 30-year-old was buried in Malta (Capucinni) Naval Cemetery, Malta. His headstone actually commemorates five men who are buried closely together.

William Smith, Third Engineer Officer, Merchant Navy. William was the son of William and Mary Smith, and the husband of Mary Dosia Smith, of Talgarreg. He served with the Merchant Navy aboard the SS Vancouver, a Glasgow registered Steam Tanker. On 21 September 1941, she was two miles from the Sunk Lightship, when she struck a mine and caught fire, whilst carrying a cargo of petrol. William was among 40 men whose lives were lost in the initial inferno. He was 35 years old, and is commemorated on the Tower Hill Memorial, London. 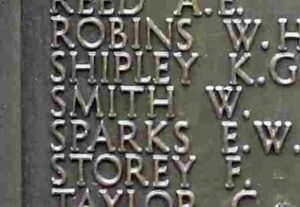 John James Williams, Third Officer, Merchant Navy. John served with the Merchant Navy aboard the SS Parracombe, a London registered cargo steamer. On 2 May 1941, she was nine miles off Cape Bon on passage from Leith for Malta with government stores, when she struck a mine and sank. John was 26 years old when he died that day, and is commemorated on the Tower Hill Memorial, England. 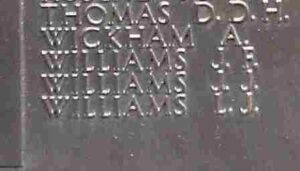