The village of Cribyn is situated about seven miles north of Lampeter. The men of the Parish who fell during both World Wars are commemorated on the War Memorial at Capel Sant Silin burial ground. 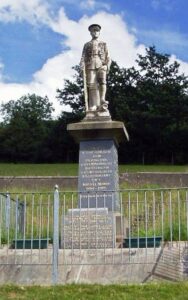 Evan Walter Davies, Second Lieutenant, Royal Welsh Fusiliers. Evan was the son of Walter and Dinah Davies, of Pantmarchog, Cribyn. He served as a Squadron Quartermaster Sergeant at the outbreak of war with the Pembroke Yeomanry, and whilst the Pembroke Yeomanry were readying to move to Egypt, Evan was commissioned as a Second Lieutenant. On 15 March 1916 Evan reached Egypt with the Yeomanry, and was transferred to the 1/7th Battalion (Merioneth & Montgomery), Royal Welsh Fusiliers, which was in Egypt attached to 158 Brigade, 53rd (Welsh) Division. The Division had fought at Gallipoli the previous year, and spent all of 1916 on garrison duty on the Suez Canal. In March 1917 the British advanced across the canal into Palestine, and took part in their first engagement here on 26 March 1917, at the First Battle of Gaza. Evan was killed in action that day, He was 23 years old, and is buried at Gaza War Cemetery, Israel. 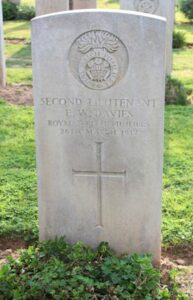 Thomas Davies, Private, 34490, Welsh Regiment. Thomas was born in 1897, the son of Evan and Jane Davies, of Frondeg, Llanwnen. He enlisted at Aberystwyth into the army, and was posted to the 18th Battalion, Welsh Regiment, which was attached to 119 Brigade, 40th (Bantam) Division. The Division moved to France during June 1916, and moved to the front near Loos. Late in 1916 they moved south to the Somme, and fought at the Battle of the Ancre, and remained in the area over the winter. In March 1917 the Germans withdrew to their shortened line, called the Hindenburg Line, and the 40th Division was one of the Divisions that followed the withdrawal. Later in the year they took part in the Battle of Cambrai, playing an important role in the attack on Bourlon Wood. It was here that Thomas was killed in action, on 23 November 1917, aged just 20. His body was lost in the ongoing fighting for the area, and so he is remembered on the Cambrai Memorial, Louverval, France. 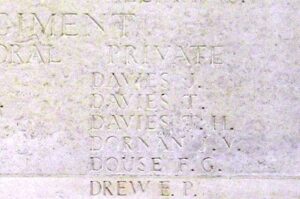 Thomas Davies, Private, G/40115, Middlesex Regiment. Thomas was the son of Charles and Mary Davies, of Penbryn Farm, Cribyn. He was a Bank Clerk prior to the war, and enlisted into the Royal Fusiliers at Builth Wells, and was posted to France on 31 August 1916, where he joined the 12th Battalion, Middlesex Regiment, which was attached to 54 Brigade, 18th (Eastern) Division. The Division was on the Somme, after having taken part in the Battle of Albert. They then fought at the Battle of Bazentin, where they captured Trônes Wood, and moved on to the Battle of Delville Wood. In October they took part in the Battle of the Ancre Heights, capturing Schwaben Redoubt, and helped capture Regina Trench. Thomas was wounded on 27 October 1916, and was evacuated via No 12 Canadian Field Ambulance to No 11 Casualty Clearing Station where he died that same day. Thomas was 27 years old, and is buried at Varennes Military Cemetery, France. 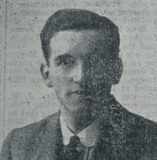 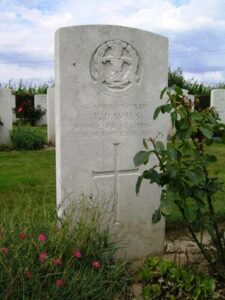 William Davies, Gunner, 161316, Royal Garrison Artillery. William was born in 1888 at Ystrad, Rhondda, Glamorgan, the son of David and Rachel Davies. He lived with his wife Hannah Davies, at Llanvaughan Cottage, Cribyn prior to the war. William enlisted at Mountain Ash into the Royal Garrison Artillery, and was posted to the 26th Heavy Battery, which formed part of 77 Brigade, Royal Garrison Artillery. The battery had taken part in the Third Battle of Ypres in 1917. It saw considerable action throughout 1918. William was taken prisoner by the Germans at some time during 1918, and died on 30 September 1918, aged 30. He is buried in Glageon Communal Cemetery Extension, France. 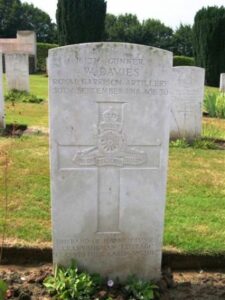 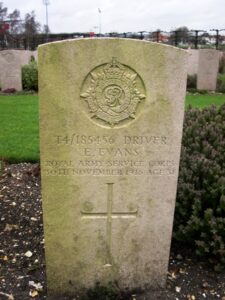 Jacob Evans, Corporal, 28262, South Wales Borderers. Jacob was the son of David and Margaret Evans, of Llanfihangel. He enlisted at Lampeter into the army, and was posted to the 5th Battalion, South Wales Borderers, which was attached to 58 Brigade, 19th (Western) Division. The Division moved to France during July 1915, and moved to positions near Loos, where it took part in the opening attack of the Battle of Loos on 25 September 1915. The following year the Division moved to the Somme, where it took part in the second wave of the attack on Ovillers-La Boiselle on 1 July, capturing the village at heavy cost. It then fought through the Somme Battles of Pozieres and the Ancre in 1916. In 1917 the Division moved North to Ypres, taking part in the Battle of Messines, then at the Menin Road and at Polygon Wood, before fighting at Broodseinde, Poelcappelle and Passchendaele Village itself. In 1918 they were caught up in the German Spring Offensive near St. Quentin, where they suffered terrible casualties, and fought at the Battle of Bapaume. They moved to Ypres, but were caught up in the German attack at Messines. Jacob was killed here on 11 April 1918. He was 23 years old, and is commemorated on the Tyne Cot Memorial, Belgium. 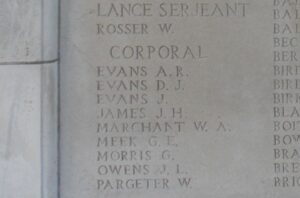 Joshua Evans, MM, Private, 241205, South Staffordshire Regiment. Joshua was from Llaindeg, Cribyn. He enlisted at Wandsworth into the army, and was posted to the 2/6th (Territorial) Battalion, South Staffordshire Regiment, which was attached to 176 Brigade, 59th (2nd North Midland) Division. During April 1916 the Division moved to Ireland, becoming the first TF Division to serve there; involved in actions against the Republican Uprising of Easter 1916. In January 1917 it returned to England, and in February 1917 landed in France. Here they took part in the German Retreat to the Hindenburg Line in March 1917, and moved to Ypres later that year. Here, they fought at the Battle of the Menin Road and the Battle of Polygon Wood, during the Third Battle of Ypres. In November the Division moved south, and took part in the Battle of Cambrai. It was still in the area by March 1918 when the Germans launched their Offensive on the Somme, and the Division was caught up in the desperate fighting at the Battle of St Quentin. Joshua was killed in action here on 21 March 1918. He was 37 years old, and is commemorated on the Arras Memorial, France. He had been awarded the Military Medal just prior to his death. 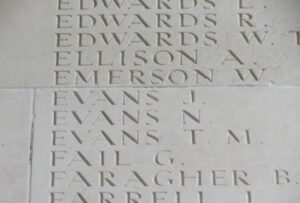 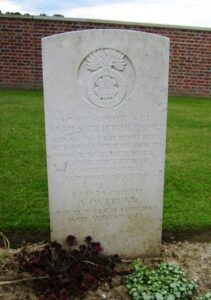 David Jenkins, Private, 320385, Welsh Regiment. David was born at Dehewid, Cribyn, but resided in Llandebie prior to the war, enlisting at Carmarthen into the Pembroke Yeomanry. The Pembroke Yeomanry had formed in Tenby for Home Defence, as part of the South Wales Mounted Brigade. They arrived in Egypt in March 1916, and on 2 February 1917, were disbanded, joining with the Glamorgan Yeomanry to form the 24th Battalion, Welsh Regiment, as part of 231 Brigade, 74th (Yeomanry) Division. The Division first saw action during the Second Battle of Gaza, then fought in the more successful Third Battle of Gaza, where David was Killed in Action on 6 November 1917. He is buried at Beersheba War Cemetery, Israel. 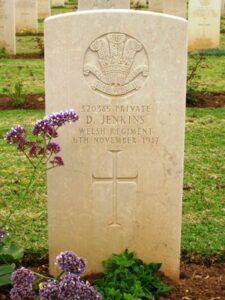 Evan Jenkins, Private, 16652, South Lancashire Regiment. Evan was born in Cribyn, the son of Richard and Anne Jenkins, of Ffynonver. He lived at Gilfach, Glamorgan prior to the war and enlisted at Cardiff into the army. He was posted to the 3rd Battalion, South Lancashire Regiment, and died on 9 May 1915, aged 36, whilst training near Liverpool. Evan is buried in Bootle Cemetery, Lancashire. He does not appear to be commemorated locally.

David Aaron Jones, Private, 320357, Welsh Regiment. David was born at Cribyn in 1900, the son of Elizabeth Jones. He enlisted at Carmarthen into the Pembroke Yeomanry. During March 1916 the 1/1st Pembroke Yeomanry moved to Egypt, where it merged with the Welsh Border Mounted Brigade and formed the 4th Dismounted Brigade. On 2 February 1917 it merged with the 1/1st Glamorgan Yeomanry to form the 24th Battalion, Welsh Regiment, and became attached to 231 Brigade, 74th (Yeomanry) Division. The Division had formed in Egypt in January 1917 and had fought through the Palestinian Campaign, at the Battles of Gaza and the Battle and capture of Jerusalem. David was killed during the attack on Beersheba on 31 October 1917. He was 17 years old, and is buried in Beersheba War Cemetery, Israel. 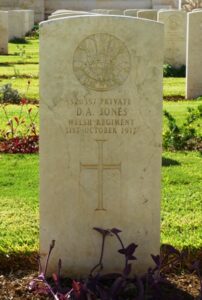 Morris James Marsden, Second Lieutenant, Machine Gun Corps. Morris was born on 16 June 1895, the son of John and Mary Anne Marsden, of Maes-y-Clere, Cribyn. He had served with the Glamorgan Yeomanry, on home service, before being commissioned into the Machine Gun Corps on 26 January 1917, and embarked for France on 8 March 1917, joining the 214th Company, Machine Gun Corps, which was attached to the 58th (London) Division. Morris joined up with the battalion in time to take part in the pursuit of the German retreat to the Hindenburg Line. During May 1917 the Division fought at the Battle of Bullecourt, and later that year moved to Ypres, where it took part in the Battle of the Menin Road Ridge. Morris was killed in action during the Battle of the Menin Road, on 20 September 1917. He was 22 years old, and is remembered on the Tyne Cot Memorial, Belgium. 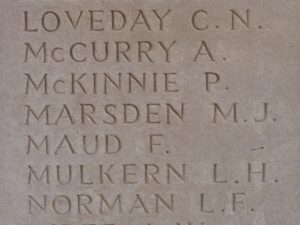 Rhys Rees, Gunner, 61241, Royal Garrison Artillery. Rhys was the son of Mary Jenkins, of Emlyn House, Cribyn. He enlisted at Lampeter into the Royal Artillery, and was posted to France with the 130th Battery, Royal Garrison Artillery.  The Battery was attached to the Fourth Army, and was caught up in German Spring offensive in 1918. The Fourth Army suffered terribly in this onslaught, and Rhys was one of those who died of wounds received in this terrible part of the war, on 13 April 1918, aged 33. He is buried in Namps-Au-Val British Cemetery, France. 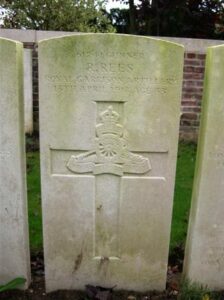 Daniel Davies, Boatswain, Merchant Navy. Daniel was the husband of Mary Davies, of Felinfach. He served with the Merchant Navy aboard the SS Henri Mory, a Swansea registered steamer, with his close friend, Richard Thomas Owen, also of Cribyn. On 26 April 1941, Henri Mory was torpedoed and sunk by the German submarine U-110 in the Atlantic. Daniel was 38 years old when he died that day, and he is commemorated on the Tower Hill Memorial, London. 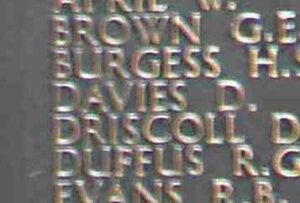 Richard Thomas Owen, Fourth Engineer Officer, Merchant Navy. Richard was the son of Griffith and Martha Owen, of Cribyn, and the husband of Sarah Owen, of Felinfach. He served with the Merchant Navy aboard the SS Henri Mory, a Swansea registered steamer, along with his close friend Daniel Davies, also of Cribyn. On 26 April 1941, Henri Mory was torpedoed and sunk by the German submarine U-110 in the Atlantic. Richard was 41 years old when he died that day, and he is commemorated on the Tower Hill Memorial, London. 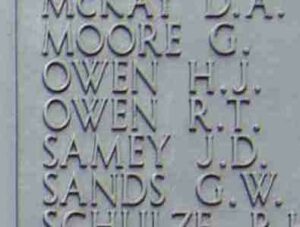 Rees Thomas Williams, Guardsman, 2737526, Welsh Guards. Rees was the son of John and Esther Williams, of Cribyn. He served with the Welsh Guards at the outbreak of war. Little else is known of Rees, but he died on 11 September 1940, aged 20, and is buried at Cribyn Unitarian Chapelyard.