Ciliau Aeron is a small village situated four miles from Aberaeron, on the River Aeron. There looks to be several war memorials in the village. One in St. Michael’s Church commemorates Evan James. Two memorials at St. Non’s Church commemorate J.A. Jones and E.L. Hardy. Ysgol Ciliau Parc School has a WW1 memorial and a memorial clock to J.A. Jones. I have no photographs of these memorials to double check them, but the details of the men are shown below.

Edwin Lewis Hardy, Private, 41374, Loyal North Lancashire Regiment. Edwin was the son of Harry and Mary Ann Hardy. After Harry died, Mary moved to Morfa Cottage, New Quay, while Edwin resided at Peniel Lane. He enlisted at Brecon into the army, and was posted to France where he joined the 1st Battalion, Loyal North Lancashire Regiment. The battalion had been in France since August 1914, and had taken part in almost every major battle since, attached to 2 Brigade, 1st Division. Edwin probably joined the battalion in Flanders early in 1918. The Division was near Estaires when the German Spring Offensive caught them, fighting through the Battles of Estaires, Hazebrouck, and Bethune before being moved south again to Arras, fighting at the Battle of Drocourt-Queant, and at the Battle of Épehy, after the tide had been turned in the favour of the Allies. The Division pushed on towards the St. Quentin Canal. Edwin was reported as being wounded on 6 August, and no more had been heard of him by his family by the end of the month. He is officially recorded as having died on 18 September 1918, during the great advance. He was 19 years old, and is buried at Brie British Cemetery, France. He is also commemorated on the memorial at Aberaeron. 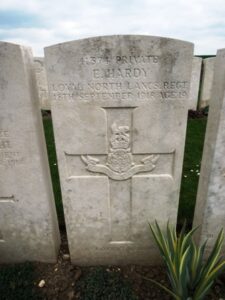 Evan James, Private, 52, South African Infantry. Evan was born around 1876, the son of Evan and Margaret James, of Greenwood, Ciliau Aeron. He had emigrated to South Africa at some time, probably after serving there during the Boer War, and after the outbreak of war enlisted into the 3rd Battalion, South African Infantry. The battalion had been recruited in Transvaal and Rhodesia, attached to the 1st South Africa Brigade, which joined the 9th Scottish) Division early in 1916 after service in Egypt in 1915. Within weeks of the launch of the Battle of the Somme on 1 July 1916, the 9th Division was moved into positions south of Longueval, and tasked with the capture of Delville Wood. On 15 July 1916 the South Africans launched their attack on the wood, and became engulfed in weeks of heavy fighting. Evan was killed in action here on 1 August 1916. He was 40 years old, and is commemorated on the Thiepval Memorial, France. 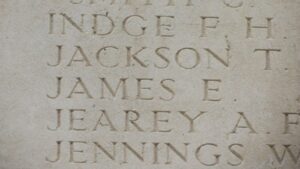 David Lewis, Sapper, 182869, Royal Engineers. David was the son of John and Mary Lewis, of Green Garden, Ciliau-Aeron. He served with the 19th Division Signals, Royal Engineers, which was attached to the 19th (Western) Division. The Division moved to France during July 1915, and moved to positions near Loos, where it took part in the opening attack of the Battle of Loos on 25 September 1915. The following year the Division moved to the Somme, where it took part in the second wave of the attack on Ovillers-La Boisselle on 1 July, capturing the village at heavy cost. It then fought through the Somme Battles of Pozières and the Ancre in 1916. David was killed in action on the Somme on 30 December 1916, aged 26, and is buried at Hem British Cemetery, Somme, France. 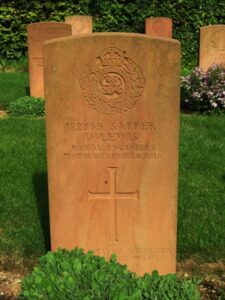 John Albert Jones, Flight Sergeant, 1022998, Royal Air Force Volunteer Reserve. John was the son of Thomas Edward and Anne Jones, of Pontfaen, Ciliau Aeron. He served as a Wireless Operator/ Air Gunner with 51 Squadron, Royal Air Force, which after 1942 was equipped with the Halifax bomber. John was killed when his aircraft was shot down over Holland on 18 December 1944. He was 23 years old, and is buried in Venray War Cemetery, Netherlands. John is also commemorated at Aberaeron Secondary School.

David Gomer Richards, Aircraftman 1st Class, 1211826, Royal Air Force Volunteer Reserve. David was the son of John Thomas Richards and Olwen Richards, of Ciliau Aeron. He was serving with the Royal Air Force at Witney in Oxfordshire when he died, possibly during the crash of a Martinet aircraft, Serial HN941, on 5 December 1942. David was 20 years old, and is buried at Ciliau Aeron Unitarian Chapelyard.