Capel Seion is a hamlet which lies along the A4120 road between Aberystwyth and Devil’s Bridge, about four miles east of Aberystwyth. About half a mile east is the hamlet of Moriah. Both hamlets have chapels, although these have fallen into disuse, Sion (Calvinistic Methodist) Chapel being converted into a house several years ago, and Capel Moriah being presently for sale, for conversion into a dwelling (October 2013). Both of these chapels housed memorials to individuals, Moriah containing a memorial to W.E.G.P. Powell, which was unveiled by RSM Fear on 11 August 1920, and Sion Chapel contained a memorial to Tom Davies. While the Moriah memorial is presently still in place, the location of the other is not known.

Thomas Davies, Private, 61573, Royal Army Medical Corps. Thomas was born in 1892, the son of David and Margaret Davies, of Preswylfa, Capel Sion, Llanbadarn. He resided at Porth prior to the war, and enlisted at Tylorstown into the Royal Army Medical Corps. Thomas arrived in Salonika on 15 September 1915, and was then attached to the 11th Battery, 1st Brigade, Royal Field Artillery. Thomas survived almost the whole campaign in Salonika, but took ill and died there on 10 November 1918, the day before the armistice. He was 26 years old, and is buried at Mikra British Cemetery, Kalamaria, Salonika. 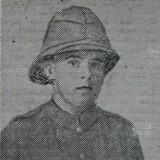 Evan Evans Griffiths, Private, 581, Australian Imperial Force. Evan was the only son of Elizabeth Lewis, of Penrhiwfelen, Capel Sion. He emigrated to Australia at the age of 16, and found work as a farm labourer, and enlisted in February 1915 into the 44th Battalion, Australian Infantry. The Battalion was raised at Claremont, Western Australia in February 1916, as part of the 11th Brigade, 3rd Australian Division, and left Australia on 6 June 1016 for England. It arrived in France on 27 November 1916 and entered the front line trenches of the Western Front for the first time on 29 December 1916. The Division battalion fought in its first major action at the Battle of Messines between 7 and 10 June 1917. Later that year it took part in the Battle of Broodseinde Ridge on 4 October 1917. The Division consolidated its lines during the following day, and Evan was reported as having gone souvenir hunting in an abandoned German pill-box, when it was struck by a German shell, killing him instantly. He was 23 years old, and was buried on the battlefield by his comrades. In the 1920’s his grave was exhumed, and Evan was re-interred at Tyne Cot Military Cemetery, Belgium. Evan is not commemorated at Capel Seion, but at Llanafan, where his parents are buried. 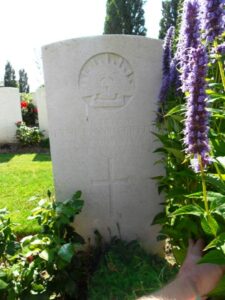 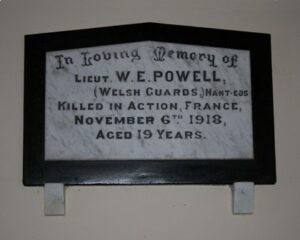 William Edward George Pryce Wynn Powell, Lieutenant, Welsh Guards. William was born on 8 March 1899, the son of Captain Edward Athelstan Lewis Powell, and Margaret Louisa Powell (née Pryse), of Nanteos, Llanbadarn. He was commissioned into the Welsh Guards, and by the summer of 1918 was in command of King’s Company, 1st Battalion, Welsh Guards, which was attached to the 3rd Brigade, Guards Division. On 8 August the Australian Corps advanced towards the town of Villers Brettoneux and won a mighty battle there against the Germans, thus turning the war. On 21 August the British launched an attack on the Somme, and the Guards Division fought here at the Battle of Albert, and then pushed east towards Bapaume. From here on the Allies had the upper hand, and moved towards the Hindenburg Line, where the Guards Division fought at the Battle of Havrincourt and the Battle of the Canal du Nord. Once the Hindenburg Line had been broken, the Allies swept eastwards over territory that had been occupied by the Germans for four long years. The Guards fought at the Battle of Cambrai, helping drive the Germans back across the Rivers Selle and Sambre in the coming weeks. In one of the last actions fought by the Welsh Guards in the Great War, on 6 November 1918, they had been tasked with capturing the village of Amfroipret, and nearby Bavai. William was killed during the attack on Amfroipret that day. He was originally buried at Buvignies, but his grave was moved after the war to the larger Maubege-Centre-Cemetery, France. There is a Memorial to William at St. Padarns Church.