Bryngwyn is a small village and parish situated about two miles north of Newcastle Emlyn, on the B4333 road to Aberporth. The village has a church, which is dedicated to St. Mary, and also an Independent Chapel. This page commemorates the members of Bryngwyn Chapel who fell during both world wars, who are commemorated on two marble plaques inside the Chapel. The photographs of the memorials were kindly supplied by Raymond Jones. 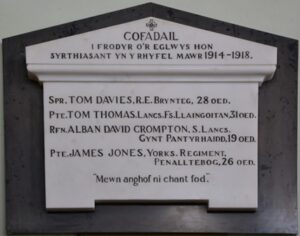 Alban Davy Crompton, Private, 32528, South Lancashire Regiment. Davy was born in Brongest in 1898, the son of David Johnson and Mary Crompton. The family had lived at Gynt, Pantyrhaidd for many years, before moving to Pantyblodau, Llanynis, Builth Wells, Breconshire. Davy was a waggoner, and enlisted in Preston into the Royal Field Artillery on 10 May 1917. He was then transferred to the Machine Gun Corps, and after training, landed in France on 13 December 1917, where he was attached to the 1/5th Battalion, South Lancashire Regiment. The battalion was attached to 166 Brigade, 55th (West Lancashire) Division, and was rebuilding after being virtually annihilated during the Battle of Cambrai on 30 November. The division was withdrawn from the area and sent to Bomy, near Fruges for intensive training, before relieving the 42nd (East Lancashire) Division in the front line at Givenchy and Festubert on 15 February. It faced several enemy raids in March, but on 9 April was hit by the full force of the German Lys offensive, and saw heavy fighting over the following days. Davy was killed in action during the defence of Hazebrouck on 12 April 1918, aged 18. He is buried in Vieille-Chappelle New Military Cemetery, Lacoutre, France. 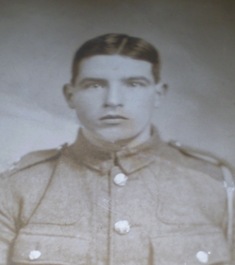 Thomas Davies, Sapper, 223291, Royal Engineers. Thomas was born at Penboyr in 1890, the son of John and Elizabeth Davies. He married Hannah Davies, of Glyncaled, Pentrecourt, in December 1912. Thomas was a carpenter and wheelwright at Pentrecourt, before being called up for service in 1916, joining the Royal Engineers, and was posted to their 411th Field Company. Thomas was stationed at the Curragh in Ireland in 1917, where he sadly died on 30 May 1917. He was 27 years old, and was brought home for burial at Llangeler (St. Celer) Churchyard. 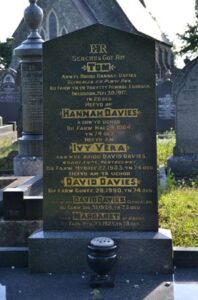 James Jones, Private, 41657, Yorkshire Regiment. James was the son of Thomas and Mary Jones, of Penalltebog, Cwmcoy, Newcastle Emlyn. He enlisted at Brecon into the Royal Field Artillery, but at some time in the winter of 1917 transferred into the 13th Battalion, Yorkshire Regiment, which was at Cambrai attached to 121 Brigade, 40th (Bantam) Division. The division had suffered terrible casualties during the Battle of Cambrai, playing an important role in the attack on Bourlon Wood. They remained in the area over the coming months, but were caught here by the German Spring Offensive of 21 March 1918, and fought there at the Battle of St Quentin and retreating back westwards fought at the First Battle of Bapaume. Due to the terrible casualties suffered by the Division here they were sent north to Flanders to rest and rebuild, but in April the Germans launched an offensive in Flanders, and the 40th Division was caught up in the thick of it again, fighting at the Battle of Estaires, which is where James was killed in action on 10 April 1918, aged 26. He has no known grave, and so is remembered on the Ploegsteert Memorial, Belgium. 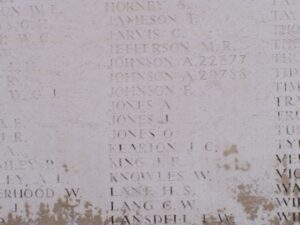 Tom Thomas, Private, 25957, Lancashire Fusiliers. Tom was the son of James and Anne Thomas, of Llaingoitan, Bryngwyn, Newcastle Emlyn. Prior to the war he worked as a mason, and he enlisted into the Royal Field Artillery, serving with the Cardiganshire Battery. At some time after 1916 he transferred into the Lancashire Fusiliers, and served with their 2/5th Battalion, which was attached to 164 Brigade, 55th (West Lancashire) Division. The Division took up a place in the front line opposite the village of Guillemont, fighting at the Battle of Guillemont and the Battle of Ginchy. After a brief rest, the division took part in the Battle of Flers-Courcelette and the Battle of Morval. Relieved by 41st Division, the Division withdrew to the area of Buire and Ribemont, before relieving the 29th Division in the Ypres salient in October 1916. It was destined to remain in this area for almost a year, stationed near Railway wood. At the end of July 1917 the Division fought at the Battle of Pilckem, and after suffering terrible casualties, was withdrawn to Recques for re-fit and training, before moving back into the line on 15 September, and fighting at the Battle of the Menin Road. Tom was killed in action here on 20 September 1917, aged 31. He has no known grave, and so is remembered on the Tyne Cot Memorial, Belgium. 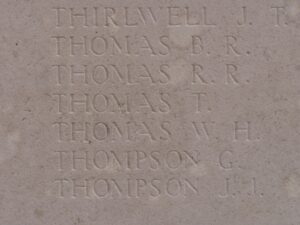 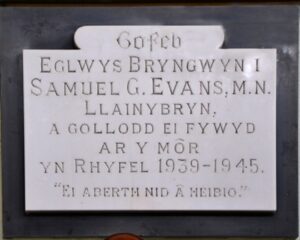 Samuel Gwilym Evans, Third Engineer Officer, Merchant Navy. Samuel was the son of Samuel and Mary Ellen Evans, of Llainybryn. He married Edith Rees, of Penpark in 1930. He served with the Merchant Navy aboard the SS Ciscar, a London registered Cargo Steamer. On 19 August 1941 she was on route from Bristol for Gibraltar in Convoy OG-71, carrying a general cargo, when she was torpedoed by the German submarine U-201 and sank with the loss of 13 lives. Samuel was 30 years old when he died that day, and is commemorated on the Tower Hill Memorial, London. 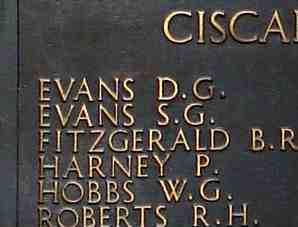