Bronant is a hamlet in the rural heart of Ceredigion, which lies on the A485 road which runs north from Tregaron to Llanilar, and falls within the community of Lledrod. The Cors Caron national nature reserve lies three miles to the southeast, and the Roman road of Sarn Helen which passes to the east of the hamlet. During August 1919 the trustees of Bronant Chapel began work on securing the lease of the disused school building in order to create a war memorial hall. I have not had the opportunity to visit the area to see if this memorial was ever erected, so the details below are of men known to have either been born or resided in Bronant. If anyone has any photographs or details of any war memorial in the village, it would be appreciated.

Evan Evans, Private, 69143, Royal Welsh Fusiliers. Evan was the son of Evan and Anne Evans, of Tynwaun, Tregaron. He lived at Bronant prior to enlisting at Brecon into the army, and was posted to France in 1917, joining the 13th Battalion, Royal Welsh Fusiliers, which was attached to 113 Brigade, 38th (Welsh) Division. Evan probably joined the battalion at Boesinghe. Here they fought at the Battle of Pilckem Ridge, and the Battle of Langemarck. They then moved to Armentieres, where they remained from September 1917 until March, 1918 when the German Spring Offensive was launched. The British had been over-run on the Somme, and so in April the Division was moved south, taking up positions north of Albert. Evan was killed in action here on 7 April 1918. He was 23 years old, and is buried at Bouzincourt Ridge Cemetery, Albert, France. 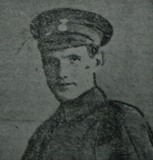 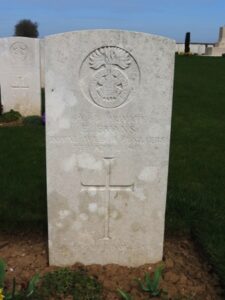 Hugh Evans, Private, 320718, Welsh Regiment. Hugh was born at Ystradfodwg in 1888, the son of David and Mary Evans. The family had returned to their native Cardiganshire by 1901 and by the time of the war resided at Pantyffynon, Bronant. Hugh enlisted at Hereford into the Glamorgan Yeomanry. During March 1916 the 1/1st Glamorgan Yeomanry moved to Egypt, where it merged with the Welsh Border Mounted Brigade and formed the 4th Dismounted Brigade. On 2 February 1917 it merged with the 1/1st Pembroke Yeomanry to form the 24th Battalion, Welsh Regiment, and became attached to 231 Brigade, 74th (Yeomanry) Division. The Division had formed in Egypt in January 1917 and had fought through the Palestinian Campaign, at the Battles of Gaza and the Battle and capture of Jerusalem. Due to the terrible casualties suffered by the British on the Western Front in March and April 1918 the Division was recalled to the Western Front, and arrived at Marseilles during May 1918. They then fought at the Second Battle of Bapaume during the great offensive, and fought in Flanders before returning to the Somme and fighting at the Battle of Épehy, as part of the offensive towards the Hindenburg Line. Hugh was killed in action near Gillemont Farm on 21 September 1918, aged 30. He was originally buried on the battlefield, but in August 1919 his grave was re-interred in Unicorn Cemetery, Vendhuile, France. 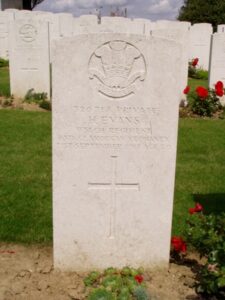 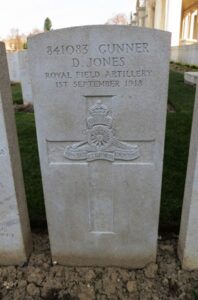 Edward Morgan, Gunner, 76579, Royal Field Artillery. Edward was the son of Thomas and Elizabeth Morgan, of Talfryn, Bronant. He enlisted in London into the Royal Field Artillery, and was posted to France, joining B Battery, 223rd Brigade, Royal Field Artillery, which was attached to the 63rd (Royal Naval) Division. The Division moved to France from service at Gallipoli in 1916, arriving at Marseilles between 12 and 23 May, and moved to positions on the Somme, where it took part in the Battle of the Ancre, and the resulting Operations on the Ancre. In April 1917 the Division was at Arras, and fought at the Second Battle of the Scarpe, where they captured Gavrelle. They then fought at the Battle of Arleux, before moving north to Ypres, where they took part in the Second Battle of Passchendaele. Their next major action was at Cambrai, during the Action of Welch Ridge, and the division remained in the Cambrai sector over the final winter of the war. Edward was wounded early the following year, and died of his wounds on 2 March 1918 aged 31. He is buried in Rocquigny-Equancourt Road British Cemetery, Manancourt, France. 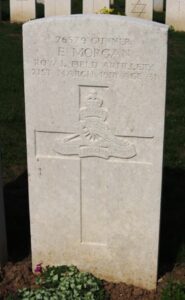 Einon Williams, Lieutenant, Royal Engineers. Einon was born on 2 November 1896, the son of Thomas and Mary Williams, of 76, St. John’s Road, New North Road, London. He was educated at the L.C.C. School of Engineering and at Finsbury College, City of London before taking up a role at the Great Western Railway Works at Swindon. He enlisted in the autumn of 1915, and received a commission into the Royal Engineers, and was posted to the Wiltshire Fortress Company, Royal Engineers in France in March 1917. Einon was gassed in France, and returned to England to recuperate, before resuming his military duties at the officers’ camp at Esher, where he was engaged in training cadets. He became ill and died of pneumonia on 28 October 1918, aged 21, and his body was brought home for burial in Bronant Calvinistic Methodist Chapelyard. 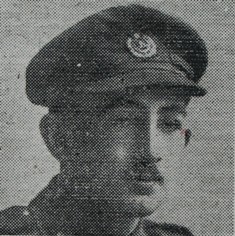 Stephen Jones Williams, Corporal, 22175, Royal Welsh Fusiliers. Stephen was the son of John and Sarah Williams, of Tanquarrel, Bronant. He lived in London prior to the war and enlisted there into the 15th Battalion, Royal Welsh Fusiliers (1st London Welsh), which was attached to 113 Brigade, 38th (Welsh) Division. On 3 December 1915 the battalion moved to France, and the entire Division moved to the Fleurbaix sector, where it was initiated into trench warfare. During June 1916 the Division marched south to the Somme, and on 7 July 1916 attacked Mametz Wood. The initial attack failed, and it was three days later, on 10 July, that a fresh attack was mounted. After two days of heavy hand to hand fighting within the wood, the Germans withdrew, and the battered Welshmen moved via Hébuterne to Boesinghe, on the Yser Canal, where it remained until launching its attack on Pilckem Ridge on 31 July 1917. Stephen was killed in action near the Steenbeek on 4 August 1917, aged 24. He has no known grave and is commemorated on the Ypres (Menin Gate) Memorial, Belgium. 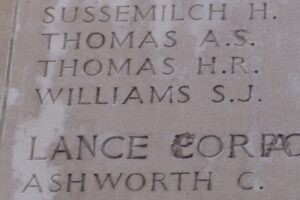 Richard Griffiths, Private, 14615740, Hampshire Regiment. Richard was the son of Thomas and Elizabeth Griffiths, of Bronant. He served with the 2/4th Battalion, Hampshire Regiment, which moved to North Africa in January 1943 to take part in Operation Torch, as part of the 46th Division. On 9 September 1943 the division took part in the landings at Salerno, and began the move through Italy. Richard was killed at Monte Cassino on 12 May 1944, aged 30, and is buried at Cassino War Cemetery, Italy.

Evan Gwilym Morgans, Gunner, 1610902, Royal Artillery. Evan was the son of Benjamin and Mary Morgans, of Brynuchaf, Bronant. He married Ethel May Cane while living in London in 1935. Evan served with 100 (8th Bn. The Gordon Highlanders) Anti-Tank Regiment, Royal Artillery. He was posted to the Far East, and was attached to the Durham Light Infantry. Evan died in Burma on 3 January 1945, aged 32, and is buried in Taukkyan War Cemetery, Myanmar. The photograph is courtesy of Tony Beck. 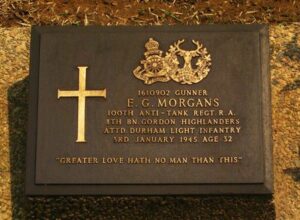