Bow Street is a village about 3.5 miles north-east of Aberystwyth, stretching along the A487 Aberystwyth to Machynlleth Road. It is now considered to include the neighbouring smaller village of Pen-y-garn and the hamlet of Rhydypennau. There are three War Memorials in the local area which commemorate the men of Bow Street who fell during both World Wars; Capel Noddfa, Capel-y-Garn and one at Rhydpennau Hall. Both the Capel Noddfa and Capel-y-Garn Memorials also include the names of those who served during the Great War and returned home. Each of these memorials is now on a separate web-page. The photographs of the memorials are courtesy of Gil Jones. 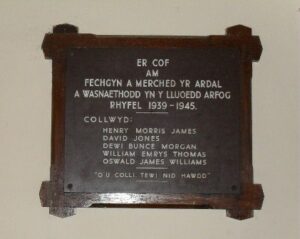 Henry Morris James, Fusilier, 14531265, Royal Welch Fusiliers. Henry was the son of William and Elizabeth James of Talybont, and the husband of Jennie Edith James, of Bow Street. He served with the 1st Battalion, Royal Welch Fusiliers. The battalion served in the Far East, in India, and then in the campaign in Burma. Henry was killed in Burma on 6 May 1944. He was 37 years old, and is commemorated on the Rangoon Memorial, Myanmar. 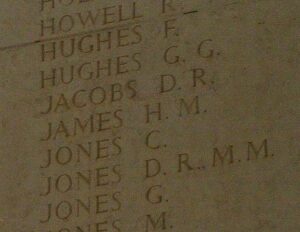 David Lloyd Jones, Flight Sergeant, 975131, Royal Air Force Volunteer Reserve. David was the son of John William and Elizabeth Ann Jones, of Aberystwyth, and the husband of Gwendoline Eva Jones. David served as a Navigator with 115 Squadron, Royal Air Force, which was a heavy bomber squadron, equipped with the Avro Lancaster. On 19 April 1944, David was the Navigator aboard Lancaster LL667, which had taken off from RAF Witchford the previous night to bomb railway yards. On their return to base, the Lancaster was preparing to land, when it was shot down by a German night fighter, and crashed, killing all seven of the crew. David was 30 years old, and was brought home for burial at Aberystwyth Cemetery. The remainder of the crew were P/O J. Birnie, Sgt J. Ferguson, P/O A.L. Feldman, RCAF, Sgt E. Kerwin, Sgt W.J. MacMillan, and Sgt G.E. Bailey. 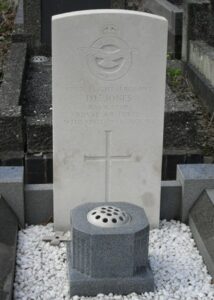 David Nathan Bunce Morgan, M.B., B.S., M.R.C.S., L.R.C.P., Surgeon Lieutenant, Royal Naval Volunteer Reserve. David, known as Dewi, was the son of James Latimer and Gwen Elizabeth Morgan, of Llandre. He trained as a Surgeon, and served with the Royal Navy as a Surgeon Lieutenant aboard the Tribal Class Destroyer HMS Gurkha. Gurkha served with the 4th Destroyer Flotilla in the Mediterranean until the outbreak of war, and in October 1939 the flotilla was reassigned to the Home Fleet, on escort duty. She attacked and sank the German submarine U-53 south of the Faroe Islands on 23 February 1940. Two weeks later, she was part of a naval force that was attacked by German Ju-88 and He-111 bombers off Norway, and Gurkha was bombed and sunk during the action, on 9 April 1940. Dewi was one of fifteen men killed during the attack, the remainder being rescued by the cruiser HMS Aurora. Dewi was 24 years old, and is buried at Trondheim (Stavne) Cemetery, Norway.

William Emrys Thomas. William was born in 1905, the son of Thomas Thomas and Katherine Thomas (nee Williams), of Waengoch, Commins Coch. He married Gwladys Hughes in 1927 and the couple resided at Penrhiw, Bow Street. Nothing is presently known of William’s military service, but he died on 25 January 1945, aged 39 and was buried in Rhydpennau Cemetery. 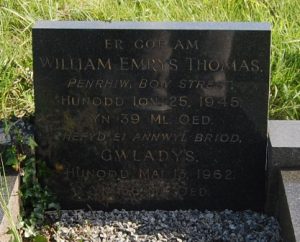 Oswald James Williams, Gunner, 11267206, Royal Artillery. Oswald was born in 1906. He served with 312 Battery, 90 Light Anti Aircraft Regiment, Royal Artillery. The regiment was attached to the 1st Infantry Division, and fought in the North African campaign. Oswald was killed during Operation Vulcan on 24 April 1943. He was 36 years old, and is buried at Massicault War Cemetery, Tunisia.