Bow Street is a village about 3.5 miles north-east of Aberystwyth, stretching along the A487 Aberystwyth to Machynlleth Road. It is now considered to include the neighbouring smaller village of Pen-y-garn and the hamlet of Rhydypennau. There are three War Memorials in the local area which commemorate the men of Bow Street who fell during both World Wars; Capel Noddfa, Capel-y-Garn and one at Rhydpennau Hall. Both the Capel Noddfa and Capel-y-Garn Memorials also include the names of those who served during the Great War and returned home. The cemetery of Pen-y-Garn also contains headstones which commemorate two local men, Hugh Jones and John Ivor Morgan. Hugh Jones is commemorated at Borth, but not on the Capel-y-Garn memorial, so has been added below. The photographs of the memorials are courtesy of Gil Jones. 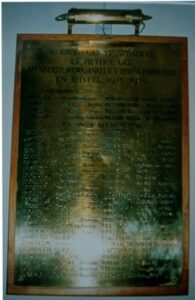 Richard Edwin Evans, Corporal, 201135, Middlesex Regiment. Richard was born in 1893, the son of Owen and Catherine Evans, of Oak House, Dole, Borth. For several years prior to the war, he resided at Islington, London, with the Parry family from Llanilar, where he worked as a publisher. Richard enlisted at Pound Lane, Willesden at the outbreak of war into the 1/7th Battalion, Middlesex Regiment. Richard landed in France with the battalion on 12 March 1915, where it was attached to 23 Brigade, 8th Division. The Division saw its first major action at the Battle of Neuve Chapelle, and then at the Battle of Aubers. It then took part in the Action of Bois Grenier, before the 1/7th Middlesex were transferred to 167 Brigade, 56th Division. The Division fought at the diversionary attack on Gommecourt then at Ginchy, Flers and Morval, where they captured Combles. They wintered on the Somme, and followed the German retreat to the Hindenburg Line in March 1917 before fighting in the Battle of Arras. They then moved to Ypres, where they fought at Langemarck. Richard was wounded here, and was evacuated to the Base Hospital at Étaples, where he died of his wounds on 8 September 1917, aged 23. Richard is buried at Étaples Military Cemetery, France. Richard does not seem to be commemorated locally. 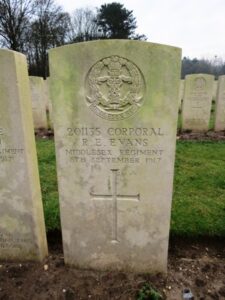 David Thomas James, Sapper, 62624, Royal Engineers. David was the son of David and Margaret James, of Penrhiw, Bow Street. He originally served with the 38th Divisional Royal Engineers, landing in France on 2 December 1915. At some time afterwards, David was transferred to the 458th Field Company, Royal Engineers, which was attached to the 49th (West Riding) Division. He survived the war, becoming discharged Class Z into the Army Reserve. David died at home of the effects of the war on 8 March 1919. He was 31 years old, and is buried in Penygarn Calvinistic Methodist Cemetery, Tirymynach.

William John James, Gunner, 118023, Royal Field Artillery. William was born in 1894, the son of Evan and Mary James, of Broncastellan, Penrhyncoch. He enlisted at Newport on 23 March 1916 into the Royal Artillery, and was posted to the 9th Reserve Battery, Royal Field Artillery. On 30 March 1917 William was discharged from the RFA as medically unfit, after having been found to have suffered badly during his training at Preston. He died on 23 April 1917, aged 23, and is buried at Penygarn Calvinistic Methodist Cemetery, Tirymynach.

Hugh Jones, Master, Mercantile Marine. Hugh was the son of David and Ann Jones of Borth. He married Anne Jane Edwards at Hull in 1906, and the couple set up home at Surrey House, Borth. Hugh served with the Mercantile Marine as Master of the SS Heathpark. On 5 October 1918, Heathpark was torpedoed and sunk by the German submarine U-91 whilst in the Bay of Biscay. All her crew were lost at sea, but Hugh’s body was found by Spanish Fishermen, who brought him ashore at Bilbao, and buried him at Bilbao British Cemetery, Spain. Hugh was 44 years old.  He is commemorated on a family grave in Bow Street but is not named on the memorial. 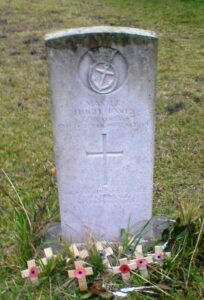 William John Francis Jones, Driver, W/2421, Royal Field Artillery. William was born at Bow Street, the son of John Pryce and Emilie Jones. The family had moved to 4, New Graigyr Eos, Pen-Y-Graig prior to the war, and William enlisted at Porth into B Battery, 121st Brigade, Royal Field Artillery, which was attached to the 38th (Welsh) Division. He joined the battalion in France at some time during 1916, probably after its assault on Mametz Wood, and would have moved with the division to Boesinghe. William would have fought with the division during its famous assault on Pilckem Ridge on 31 July 1917. The division wintered in the Armentieres sector, before moving back to the Somme in April 1918, but the divisional artillery remained in Northern France, due to the German Lys offensive in April. William was killed in action here on 19 June 1918, aged 21, and is buried in Acheux British Cemetery, France. William is not commemorated locally. 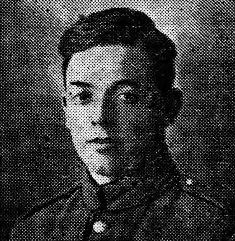 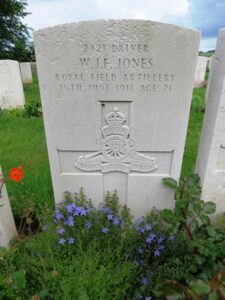 David Lewis, Private, 437073, Canadian Infantry. David was born on 21 June 1893, the son of Benjamin Richard and Margaret Lewis, of Golm Fryn, Llandre. He emigrated to Canada at some time after 1911, and enlisted at Edmonton on 17 April 1915 into the Canadian Infantry. In February 1916 David arrived in France, joining the 14th Battalion, Canadian Infantry (Royal Montreal Regiment), which was attached to the 3rd Canadian Brigade, 1st Canadian Division. He joined the battalion in the Ypres Salient, and in June 1916 saw his first major action during the Canadians famous action at the Battle of Mount Sorrel. The Canadians moved to the Somme in September 1916, and took over the line at Mouquet Farm from the Australians. David was killed during the Battle of Thiepval Ridge, when the 14th Battalion attacked Kenora Trench, near Mouquet Farm on 26 September 1916. He was 25 years old, and is commemorated on the Vimy Memorial, France. 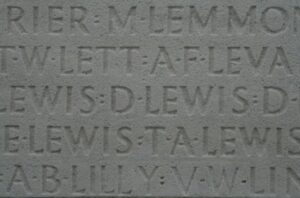 William Benjamin Lewis, Lance Corporal, T/436675, Royal Army Service Corps. William was born in 1895, the son of Benjamin Richard and Margaret Lewis, of Golm Fryn, Llandre. He had originally served with the 3rd Battalion, London Regiment (Royal Fusiliers), but was transferred to the MT Company, Royal Army Service Corps, presumably after becoming wounded. William survived the wear, but died at home on 4 March 1920, aged 25. He is buried at Penygarn Calvinistic Methodist Cemetery, Tirymynach. One of four patriotic brothers from Llandre who served during the war, William’s name is shown on the lower half of the memorial, which shows those who survived. 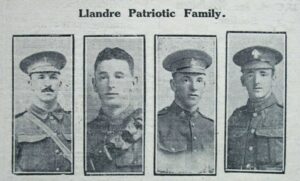 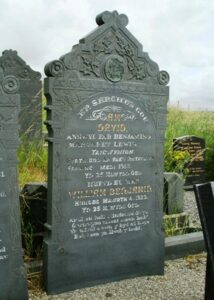 John Ivor Morgan, Gunner, 731220, Royal Field Artillery. John was the son of John Bunce Morgan and Jane Morgan, of Glanfred, Llandre. He enlisted at Bedford into the Royal Artillery, and was posted to A Battery, 37th Brigade, Royal Field Artillery. The battery formed in Egypt in September 1917, attached to the 75th Division. The Division served in Egypt and Palestine, taking part in the Third Battle of Gaza. They then fought at the Capture of Junction Station, the Battle of Nabi Samweil, the Battle of Tell’Asur, the Battle of Berukin, and the Battles of Megiddo. They remained in Palestine for the duration of the war. John was killed in action in Palestine on 19 September 1918. He is buried in Ramleh War Cemetery, Israel. 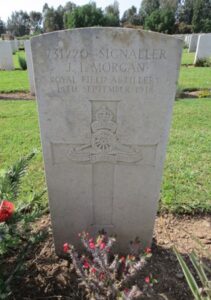 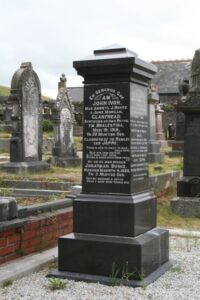 John Pritchard, Private, 54087, Welsh Regiment. John was the son of David and Sarah Pritchard, of Penrhiw, Bow Street. He resided at Dowlais prior to the war, and enlisted at Maesteg into the Welsh Regiment. John was posted to France with the 17th Battalion, Welsh Regiment (1st Glamorgan), which was attached to 119 Brigade, 40th (Bantam) Division. The Division moved to France during the first week of  June 1916, and moved to the front near Loos. Late in 1916 they moved south to the Somme, and fought at the Battle of the Ancre, and remained in the area over the winter. In March 1917 the Germans withdrew to their shortened line, called the Hindenburg Line, and the 40th Division were one of the Divisions that followed the withdrawal. John was killed in action near the Hindenburg Line, during an attack against the German positions between Villers-Plouich and La Vacquerie on 24 April 1917. He was 38 years old and is buried in Fifteen Ravine British Cemetery, Villers-Plouich, France. 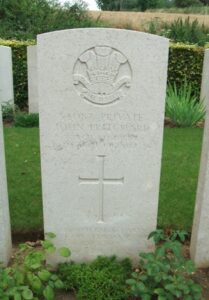 William Percy Rowlands, Private, 40749, South Wales Borderers. William was the son of William and Mary Rowlands, of Station House, Glandyfi, Cardiganshire. He enlisted at Wrexham into the army, and was posted to the 2nd Battalion, South Wales Borderers, which was attached to 87 Brigade, 29th Division. The Division moved to the Western Front after service at Gallipoli, on 15 March 1916. It took part in its first major action in France during the 1916 Somme Offensive, and fought at the Battles of Albert and Le Transloy, suffering heavy casualties. In the Spring of 1917 they fought at the Battle of the Scarpe, which was part of the Arras Offensive, and then moved further north to Ypres. Here they fought at the Battle of Langemarck. William was killed in action at Langemarck on 20 August 1917, during fighting near Saules Farm. He was 19 years old, and is commemorated on the Tyne Cot Memorial, Belgium. William does not seem to be commemorated locally. 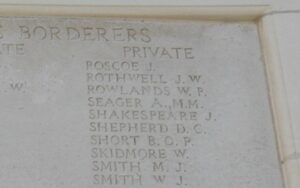 Edward Williams, Private, M2/156574, Royal Army Service Corps. Edward was the son of William and Catherine Williams, of Tanybryn, Llanfihangel Geneur Glyn. He worked as a Chauffeur at Llandre prior to the war, and enlisted at Aberystwyth into the Army Service Corps. Edward became a Driver with the MT Company, Army Service Corps, and was on home service in Kent when he took ill with pneumonia. Edward died at Canterbury Military Hospital on 8 November 1918. He was 23 years old, and was brought home for burial at Llanfihangel Geneur Glyn (St. Michael) Churchyard Extension. 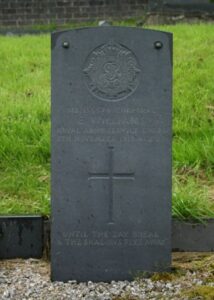 Wallace Williams, Lance Corporal, 10566, South Wales Borderers. Wallace was born at Llanfihangel Genau’r Glyn in 1892, and was the adopted son of Jane Lewis, of Llandre. He had enlisted into the 1st Battalion, South Wales Borderers prior to 1911, and at the outbreak of war was in China, serving with the 2nd Battalion, South Wales Borderers. The battalion saw its first action of the war in China, when it took part in the capture of Tsingtao from the Germans. The battalion embarked from Hong Kong on 4 December 1914 for Plymouth. Once back on British soil, they joined 87 Brigade, 29th Division at Rugby. On 17 March 1915 the battalion sailed from Avonmouth on the SS Canada for Alexandria, and on 25 April 1915 the 2nd SWB, minus one Company, landed at S Beach, Gallipoli. Wallace was killed in action here during the second day of the campaign, on 26 April 1915. He was 21 years old, and is commemorated on the Helles Memorial, Gallipoli.