Bow Street is a village about 3.5 miles north-east of Aberystwyth, stretching along the A487 Aberystwyth to Machynlleth Road. It is now considered to include the neighbouring smaller village of Pen-y-garn and the hamlet of Rhydypennau. There are three War Memorials in the local area which commemorate the men of Bow Street who fell during both World Wars; Capel Noddfa, Capel-y-Garn and one at Rhydpennau Hall. Both the Capel Noddfa and Capel-y-Garn Memorials also include the names of those who served during the Great War and returned home. Each of these memorials is now on a separate web-page. 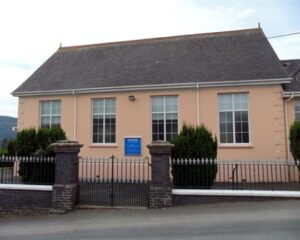 Thomas Rees Davies, Gunner, 164773, Royal Field Artillery. Thomas was born in 1886, the son of Thomas and Margaret Davies, of Blaenddol Cottages, Llangorwen. He enlisted at Aberystwyth into the Royal Artillery, and was posted to France with A Battery, 165th Brigade, Royal Field Artillery, which was attached to the 31st Division. In March 1916 the division moved to France, and saw its first major action at the Battle of Albert in July 1916. The division moved back into the line in November 1916 and took part in the Battle of the Ancre, and then wintered on the Ancre, until moving to Arras the following year. Here it fought at the Third Battle of the Scarpe, and helped in the capture of Oppy Wood. At the beginning of 1918 the Division was in the St. Quentin sector, and became one of the Divisions hit by the German Spring Offensive of 21 March 1918, taking part in heavy fighting during the withdrawal towards Arras. Thomas was killed in action on 21 April 1918. He was 31 years old, and is buried in St. Amand British Cemetery, France. He is also commemorated on the war memorial at Llangorwen. 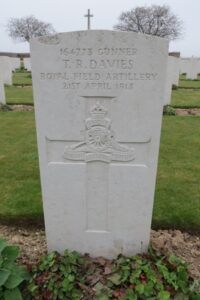