Gerlan Methodist Chapel was situated at High Street, Borth, and contained four war memorials. One of these memorials was moved there from Capel Shiloh when it closed in 1994, and another came when Libanus Methodist Chapel merged with Soar Chapel in 1969. Gerlan Church itself was formerly known as Libanus, prior to its merge with Soar, and also erected memorials to its parishioners who fell during both World Wars. All four memorials were moved to St. Matthew’s Church at Borth, after Gerlan Chapel closed its doors on 25 March 2013. 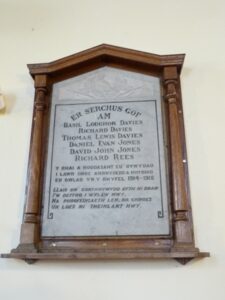 Basil Lougher Davies, Sailor, Mercantile Marine. Basil was born in 1897, the son of Thomas and Mary Anne Davies, of Gloucester House, Borth. He served with the Mercantile Marine aboard the SS Penvearn. On 1 March 1918, she was 15 miles from South Stack, Anglesey, when she was torpedoed and sank by the German submarine UB-48. Basil was among the men lost in the sinking that day. He was 20 years old, and is commemorated on the Tower Hill Memorial, London.

Richard Davies, Deck Hand, DA/9/88, Royal Naval Reserve. Richard was born at Borth on 29 December 1863, and married in 1878, residing with his wife, Mary Davies, and their children at 5, Wesleyan Place, Borth. Richard worked as a labourer prior to the war, but was also a Royal Naval Reservist. He was recalled to the colours at the outbreak of war, and was posted to HM Trawler Evangel. She was used for anti-submarine duties in the Irish Sea, sailing from her base at Milford Haven. On 25 March 1917, Evangel was on patrol off Milford when she struck a mine which had been laid by the German submarine UC-48, and sank with the loss of 25 lives. Richard was among the men killed that day, and was 54 years old. His body was recovered from the sea, and he was buried at Penygarn Calvinistic Methodist Cemetery, Tirymynach. 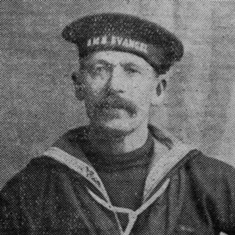 Thomas Lewis Davies, Private, 26752, South Wales Borderers. Thomas was born at Borth in 1895, the son of Thomas and Mary Davies, of Nathaniel House, Borth. He originally enlisted into the Royal Flying Corps, but at sometime after 1915 transferred into the 7th Battalion, South Wales Borderers, which was attached to 67 Brigade, 22nd Division. Thomas joined the battalion at Salonika sometime in 1916. Between 10 to 18 August 1916 they fought at the battle of Horseshoe Hill, then between 13 to 14 September 1916 at the battle of Machukovo. Between 24-25 April and 8-9 May 1917 the Division fought at the battle of Doiran, and then on 18 September 1918 at the Second Battle of Doiran. Thomas was killed in action here, at the Second Battle of Doiran, on 18 September 1918. He was 23 years old, and is buried at Doiran Military Cemetery, Salonika.

Daniel Evan Jones, First Engineer, Mercantile Marine. Daniel was born in 1886, the son of Jenkin and Margaret Jones, of Caradog, Borth. He served as an engineer in the Mercantile Marine aboard the SS Canganian, a Cardiff registered steamer. On 17 November 1916 she was on voyage from Methil to Scapa Flow when she struck a mine which had been laid by the German submarine UC-29, and sank with the loss of 13 lives. Daniel was 31 years old when he died that day, and is commemorated on the Tower Hill Memorial, London.

David John Jones, Private, 129150, Canadian Infantry. David was born on 9 August 1887, the son of William David Jones and Elizabeth Jones, of Bodfor House, Borth. David emigrated to Canada prior to the war, where he worked as a Carpenter. He enlisted at Vancouver on 11 September 1915 into the Canadian Infantry, and was posted to the 72nd Battalion, British Columbia Regiment, which was attached to the 4th Canadian Division, and crossed to France in August 1916 after forming in southern England. The Division moved to the Somme, and took part in the Somme Offensive, fighting at the Battle of Le Transloy, and the Battle of the Ancre Heights, where they captured Regina Trench. David was killed at Le Sars on 1 November 1916, while patrolling in No Man’s Land, when his party was caught up in a bomb fight with some Germans. He was 29 years old, and is buried at Adanac Military Cemetery, Miraumont, France. 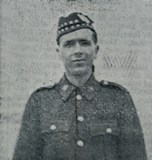 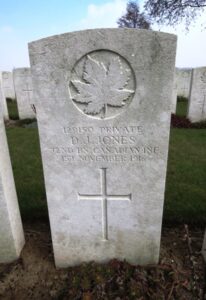 Richard Rees, Seaman, Mercantile Marine. Richard was born at Borth in 1870, the son of Eliza Rees, of 3, New Street, Borth. His father was a mariner, and Richard followed in his footsteps by going to sea. Richard served on the SS War Tabard, a merchant steamship. He became ill, and died in hospital at Glasgow on 30 September 1918. No more is known of Richard, as he is not commemorated by the CWGC. 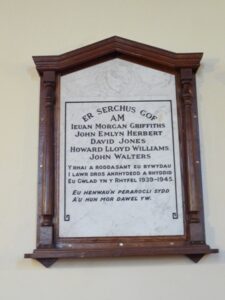 Ieuan Morgan Griffiths, Chief Officer, Merchant Navy. Ieuan was the son of John and Anne Griffiths, of Borth. He served with the Merchant Navy aboard the SS Hamla, a London registered steam freighter. On 18 August 1942, Hamla was on route from Rio de Janeiro for Britain with a cargo of iron ore when she was torpedoed by the German submarine U-506 and sunk. Ieuan was among the 42 men who died aboard her in the sinking. He was 34 years old, and is commemorated on the Tower Hill Memorial, London.

John Emlyn Herbert, Master, Merchant Navy. John was the son of John and Margaretta Herbert, of Borth, and the husband of Edith Mary Herbert, of Heath, Cardiff. He served with the Merchant Navy as Captain aboard the SS Dungrange, a Grangemouth registered cargo steamer. After the Normandy invasion of 6 June 1944, Dungrange was employed in shipping arms, supplies and munitions to the Normandy Beach-head from the Isle of Wight. On 10 June 1944 she was on her third trip when a German E-boat attacked her off St Catherine’s Point, and sank the Dungrange with torpedoes. John was among 18 of her crew who perished that day. He was 45 years old, and is commemorated on the Tower Hill Memorial, London.

John Douglas Walters, Gunner, 920412, Royal Horse Artillery. John had been born at Borth, the son of Mr. and Mrs. T. Walters. The family later resided at Gwynfryn, Carmarthenshire. John served with the 4th Regiment, Royal Horse Artillery, which was formed at Helmieh, Egypt in May 1939, moving to Mersa Matruh in early 1940. The battery fired the opening rounds of the campaign in North Africa against the Italians at Sidi Barrani on 8 December 1940, and as part of the 7th Armoured Division, fought in the Western Desert campaign, seeing action again in January 1941 at Bardia, the capture of Tobruk, and at Beda Fomm. John was killed during a period of intense pressure on the British lines around Tobruk on 30 May 1942. He was 26 years old, and is buried at Knightsbridge War Cemetery, Acroma, Libya.

Howard Lloyd Williams, Quartermaster, Merchant Navy. Howard was the son of Richard and Mary Williams, of Borth. He served with the Merchant Navy aboard the MV Abosso, a Liverpool registered ocean liner. On 29 October 1942, Abosso was on voyage from Cape Town to Liverpool, when she was attacked and sunk by the German submarine U-575. Only 31 people survived the sinking, out of around 182 crew, 20 gunners, and 190 passengers aboard. Howard was amongst the dead that day. He was 25 years old, and is commemorated on the Tower Hill Memorial, London. 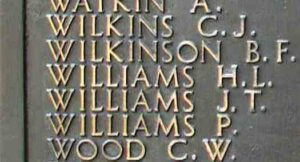