Capel Shiloh was closed in 1994 and its war memorial was moved into Gerlan Methodist Chapel.  Gerlan was formerly known as Libanus, prior to its merger with Soar Chapel. Both Chapels had erected their own memorials to their parishioners who fell during both World Wars. These memorials, and that of Capel Shiloh, were moved to St. Matthew’s Church at Borth, after Gerlan Chapel closed its doors on 25 March 2013. 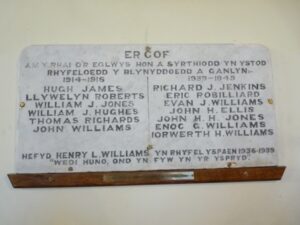 Hugh James, Boatswain (Bosun), Mercantile Marine. Hugh was born at sea in 1881, the son of Hugh and Margaret James, of Borth. He married Mary Jane Bywater, and the couple resided at Manchester House, Borth. Hugh served in the Mercantile Marine aboard the SS Penvearn, a Falmouth registered steamship. On 1 March 1918, Penvearn was 15 miles from South Stack, Anglesea, in ballast, when she was torpedoed and sank by the German submarine UB-48. Hugh was amongst 21 men who died in the sinking that day. He was 37 years old, and is commemorated on the Tower Hill Memorial, London. 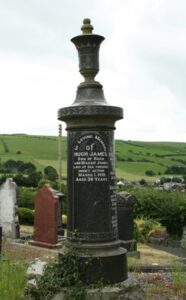 William John Jones, Driver, W/3765, Royal Field Artillery. William was born in 1892, the son of William and Jane Jones, of Bryn Y Mor, Borth. He lived at Gilfach Goch prior to the war, working as a bricklayer. William enlisted at Tonypandy on 23 April 1915 into the 38th (Welsh) Division Ammunition Column, Royal Field Artillery, and landed in France on 24 December 1915, joining up with the bulk of the 38th Division in the Fleurbaix sector. Very little is presently known of William, but he was discharged from the Royal Field Artillery on 11 December 1916 due to tuberculosis, and died at home in Craigfryn on 28 August 1917, aged 25. William’s case was passed onto the CWGC on 5 August 2012 as a result of my research, and he was accepted for commemoration on Thursday 7 August 2014.  He will be commemorated in the United Kingdom Book of Remembrance, although he appears to have been buried in Llandre on 1 September 1917. 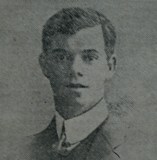 William Llewellyn Roberts, Ordinary Seaman, Mercantile Marine. William was born at Borth in 1903, the son of son of John Henry and Margaret Roberts. The family later resided at 70, Sunbury Road, Liverpool. William served with the Mercantile Marine aboard the SS Heathpark. On 5 October 1918, Heathpark was torpedoed and sunk by the German submarine U-91 whilst in the Bay of Biscay. William was one of three Borth men killed aboard her that day. He was just 15 years old, and is commemorated on the Tower Hill Memorial, London.

John Williams, Seaman, Mercantile Marine. John was the husband of Elizabeth Williams, of Eltham House, Borth. He was a long serving mariner, and had been home on leave when he suddenly died in June 1916, aged 60. He was buried at Penygarn Cemetery. John was not a casualty of war, so is not commemorated by the CWGC.

John Hayden Ellis, Boatswain, Merchant Navy. John was born at Borth in 1886, the son of John and Mary Ellis. He served in the Merchant Navy for many years prior to World War Two, his wife, Annie Ellis keeping the family home at Borth. John served aboard the SS Earls Park, a Greenock registered cargo steamer. On 12 June 1940, Earls Park was on voyage from Sunderland to Bordeaux, with a cargo of coal, when she was torpedoed and sunk by the German submarine U-101. John was 54 years old when he died that day, and is commemorated on the Tower Hill Memorial, London. 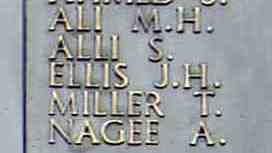 Richard James Jenkins, Private, S/120085, Royal Army Service Corps. Richard was the son of James and Elizabeth Jenkins, of Borth. He served with 5 Field Bakery, Royal Army Service Corps during the war. Richard probably died of wounds suffered during the evacuation of Dunkirk, at Thanet, Kent on 11 April 1940. He was 21 years old, and is buried at Borth (St. Matthew) Churchyard. 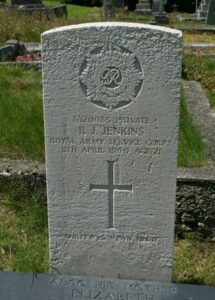 John Hubert Hughes Jones, Volunteer, Home Guard. John was the son of William David Jones, and of Elizabeth Jones, of Chepstow, Monmouthshire. He served with the 3rd City of London (Farringdon) Battalion, Home Guard. John died on active service on 9 September 1940. He was 34 years old, and is buried at Penygarn Calvinistic Methodist Cemetery, Tirymynach.

Elie (Eric) Robilliard, Master, Merchant Navy. Eric was the Husband of Vera Robilliard, of Borth. He served in the Merchant Navy, and was Captain of the SS Creekirk, a London registered cargo steamer. On 18 October 1940, Creekirk was on route from Wabana, Conception Bay via Sydney to Workington, in Convoy SC-7, carrying a cargo of 5,900 tons of iron ore, when she was torpedoed and sunk by the German submarine U-101. Eric was among 36 men lost aboard her that day. He was 46 years old, and is commemorated on the Tower Hill Memorial, London. 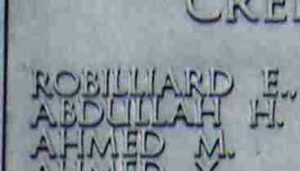 Enoch Gwynfryn Williams, Sergeant (Navigator), 1582620, Royal Air Force Volunteer Reserve. Enoch was the son of Thomas and Mary Williams, of Borth, and the husband of Joyce R. Williams, of Whitmore Reans, Wolverhampton. He served as a Navigator with the Royal Air Force. Enoch was killed when his aircraft crashed during a training exercise in Shropshire on 13 January 1945. He was 25 years old, and is buried at Wolverhampton Borough Cemetery, England.

Evan James Williams, Master, Merchant Navy. Evan was the son of Richard and Mary Williams, of Borth, and the husband of Margaret Jane Williams, of Childwall, Liverpool. He served with the Merchant Navy aboard the SS Earlspark, a Greenock registered steamer. On 12 June 1940, Earls Park was on voyage from Sunderland to Bordeaux, with a cargo of coal, when she was torpedoed and sunk by the German submarine U-101. Evan was 59 years old when he died that day, and is commemorated on the Tower Hill Memorial, London. 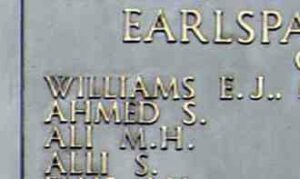 The inscription on the plaque reads (as well as the names)

Which roughly translates as

“Fallen Asleep, But Alive In Spirit”