Blaenpennal is situated just off the A485 road from Tregaron to Llanilar, about ten and a half miles north-east of the larger town of Lampeter, and lies in the peaceful Aeron Valley. The Church is dedicated to St. David. I do not presently know if there are any war memorials inside the church, so this page is made up of the three men known to have been from the village who fell during both world wars.

John Evan Davies, Gunner, 32319, Royal Field Artillery. John was born at Blaenpennal in 1893, the son of David and Mary Davies. The family later resided at Glangors, Penuwch, Llanio Road. He enlisted at Caerphilly into the Royal Artillery, and landed in France on 5 September 1915, attached to A Battery, 100th Brigade, Royal Field Artillery, which was attached to the 22nd Division. The Division crossed to France in early September 1915, with all units being concentrated near Flesselles by 9 September, but the Division was then diverted to Salonika, sailing from Marseilles on 27 October 1915. John was wounded during the Second Battle of Doiran. He died of his wounds on 21 September 1918, aged 25, and is buried at Sarigol Military Cemetery, Kriston, Salonika.

Daniel Thomas Evans, Private, 26720, Welsh Regiment. Daniel was the son of David and Elizabeth Evans, of Tan-Y-Gareg, Blaenpennal. He enlisted at Ferndale into the Welsh Regiment, and was posted to the 10th Battalion, Welsh Regiment (1st Rhondda), which was attached to 114 Brigade, 38th (Welsh) Division. The division landed in France on 2 December 1915, and after assembling at Boulogne moved to the Fleurbaix area for trench initiation. The division spent the coming months in different sectors of the line, from Fleurbaix to Cuinchy, and by the beginning of March 1916 was in position on the La Bassée Canal. On 9 March 1916 the Germans blew a mine opposite the front line held by the 10th Welsh, killing two men and wounding six. Daniel was one of the dead. He was 34 years old, and is buried in Guards Cemetery, Windy Corner, Cuinchy, France. 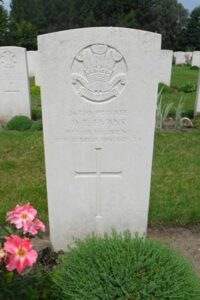 John Evans, Leading Aircraftman, 1283580, Royal Air Force Volunteer Reserve. John was the son of Isaac and Sarah Evans, of Blaenpennal. He volunteered to serve with the Royal Air Force, and was posted to 238 Squadron, RAF. The squadron was equipped with the Hawker Hurricane, and had taken part in the Battle of Britain in 1940, before leaving for the Middle East in May 1941, taking part in the defence of Malta, before moving to North Africa. During March 1944 the squadron moved to Corsica, to perform fighter sweeps over Italy. John didn’t take part in this move, however, as he was killed in Alexandria on 24 March 1944, aged 25. He is buried in Heliopolis War Cemetery, Egypt.