Beulah is a small village located halfway on the B4333 road between the market town of Newcastle Emlyn and the seaside resort of Aberporth. The men of the village who fell during both world wars are commemorated on the war memorial which is located inside the vestry of Beulah Chapel. The photograph of the memorial is courtesy of Raymond Jones. 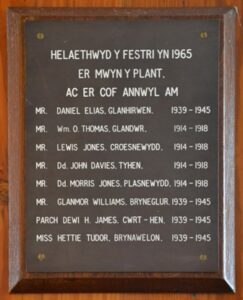 David John Davies, Private, 355816, Royal Welsh Fusiliers. David was the son of David and Nancy Davies, of Tyhen. He was the brother of Miss Annie M. Davies, of Ty-Bryn Infirmary, Tredegar, Monmouth. David originally served with the Welsh Horse Yeomanry, after enlisting into the regiment at Newtown. The Welsh Horse formed in August 1914 in the southern counties of Wales, with headquarters at Cardiff. Later in the year it transferred to Newtown, before joining the 1/1st North Midland Mounted Brigade of 1st Mounted Division in the Diss area of Norfolk. During September 1915 the battalion was dismounted and sailed from Liverpool in the SS Olympic on 25 September, landing at Anzac, Gallipoli on 10 October 1915. The Welsh Horse were evacuated to Egypt in December 1915, and on 22 February 1916 formed part of the 3rd Dismounted Brigade, which was on Suez Canal Defences. On 4 March 1917 it merged with the 1/1st Montgomeryshire Yeomanry, and formed the 24th (Montgomeryshire and Welsh Horse Yeomanry) Battalion, Royal Welsh Fusiliers at Helmieh, Cairo, attached to 231 Brigade, 74th  Division, fighting in Palestine, before moving to France in May 1918. David was killed in France, at the Battle of Épehy, on 18 September 1918. He was 24 years old, and is buried at Ste. Emilie Valley Cemetery, Villers-Faucon, France. 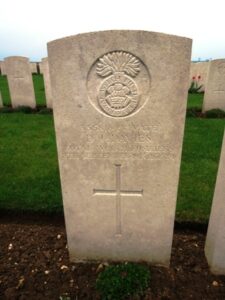 David John Davies, Second Lieutenant, Royal Welsh Fusiliers. David was the son of Owen and Frances Davies, of Ffynongog, Beulah. He had graduated from Aberystwyth University before taking up a teaching post at York, but in 1914 returned to Wales to study in agriculture back at Aberystwyth. He was commissioned into the Royal Welsh Fusiliers in 1915, and posted to the 10th Battalion, RWF which was in France attached to 76 Brigade, 3rd Division. The division moved to the Somme sector in July 1916, in preparation for its part in the assault on Montauban Alley and Pozières. It saw heavy fighting over the coming weeks, playing a prominent part in the assault on Delville Wood, where the 10th RWF was awarded two Victoria Crosses. The division moved to the Serre sector early in November, and on 13 November the 10th RWF took part in an attack on the Serre trenches, near Mark and Matthew Copse. David was among a number of officers killed during the attack of 13 November 1916. He was 37 years old, and is commemorated on the Thiepval Memorial, France. David is not named on the memorial, but is commemorated at Aberystwyth and Sarnau. 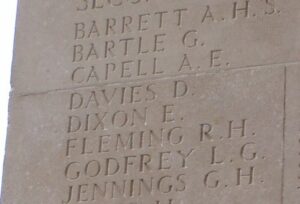 David Morris Jones, Ordinary Seaman, Mercantile Marine. David was the son of John Parry Jones, and Martha Jane Jones, of Plasnewydd, Beulah. He served with the Mercantile Marine aboard the S.S. Canganian, which was a Cardiff registered merchant steamer. On 17 November 1916, Canganian was en-route from Methil to Scapa Flow with a cargo of coal, when she struck a mine which had been laid by the German submarine UC-29, and sank with the loss of eighteen lives. David was just 16 years old when he drowned in the sinking. His body was washed ashore in Scotland, and he was originally buried in St. Cyrus Parish Churchyard. A Scottish woman was on holiday in Aberaeron at the time, and was sent a newspaper by a friend of hers. One article took her interest, and it was the story of the burial of a sailor in her home village, who could only be identified by the label of Ben Davies, Tailor, Newcastle Emlyn on his coat. She showed the newspaper to the local JP, who contacted David’s father, who travelled to Scotland to identify the body. His body was duly identified, and re-interred at the request of his parents in Beulah Congregational Chapelyard on 9 December 1916. 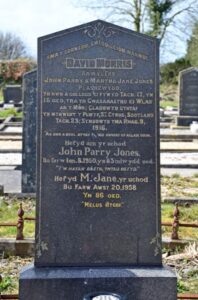 Lewis Jones, Private, 37634, Royal Welsh Fusiliers. Lewis was the son of William and Anne Jones, of Croesnewydd, Beulah. He worked at Gower Road Dairy, Sketty prior to the war and enlisted on 11 December 1915 into the Royal Welsh Fusiliers. On 26 October 1916 Lewis was posted to the 11th Battalion, Royal Welsh Fusiliers, which was attached to 67 Brigade, 22nd Division. The Division had initially served in France, before being sent to Salonika. Here they fought for most of the war. Lewis was killed during the Battle of Doiran, on 18 September 1918. He was 25 years old, and is commemorated on the Doiran Memorial, Salonika.

William Owen Thomas, Private, 29616, South Wales Borderers. William was born around 1892, in Penanteryn, Blaenporth, the son of David and Hetty Thomas. He married Elizabeth Jones, of Glandwr, Beulah in 1916. William enlisted at Brecon into the 5th Battalion, South Wales Borderers, who formed part of 58 Brigade, 19th (Western) Division. The Division fought at the Somme, suffering heavy casualties, and was moved to Ypres, where they took part in the Battle of Messines, which was the opening move of the Battle of Passchendaele. William was killed in action at ‘Whitesheets’ on 7 June 1917, and was buried in Wytschaete Military Cemetery, Belgium. Elizabeth later married David T. Owen, and the couple resided at Furze Hill, Cefneithin. 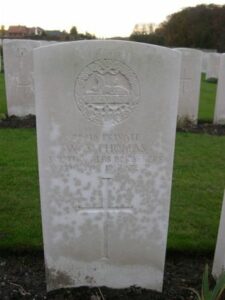 Daniel Elias, Sailor, Merchant Navy. Daniel was born in 1906, the son of John and Sarah Elias, of Glan-Hirwen, Beulah. He served with the Merchant Navy, and during the early months of the war was serving aboard the SS British industry, a steam powered oil tanker. He became ill aboard ship whilst it was en-route to Canada, and died at sea of a pulmonary embolism on 13 August 1941, aged 35. Daniel’s body was taken ashore at Halifax, Nova Scotia, where he was buried. He is not recognised as a war casualty by the CWGC, as his death was not caused by enemy action.

Reverend Dewi Henry James, Chaplain (Squadron Leader), 106645, Royal Air Force Volunteer Reserve. Dewi was the son of Samuel and Margaret James, of Cwrt-Hen, Beulah, Newcastle Emlyn. Prior to the war he resided with his wife, Megan, at Newport, Gwent, where he was a Minister of Religion at Mynydd Seion Chapel, High Street. Dewi volunteered to serve as a Chaplain (Squadron Leader) with the Royal Air Force Volunteer Reserve. After the invasion of occupied Europe, Dewi was among a large party of RAF servicemen who, along with trucks and supplies for the RAF in Belgium, were aboard the Landing Ship LST-420. It was unable to enter the port of Ostend because of a severe storm and the captain decided to return to England, but hit a mine, split in two, and sank. Fourteen officers and 224 other ranks were lost, with only 31 men saved. Dewi was lost in the sinking on 7 November 1944. He was 28 years old, and is commemorated on the Runnymede Memorial, Surrey. 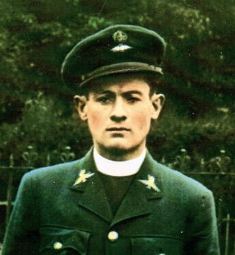 Hettie Annie Tudor, Sister, 236473, Queen Alexandra’s Imperial Military Nursing Service. Hettie was the daughter of Charles Richard and Sarah Ann Tudor, of Cardigan. She served as a Nurse with Queen Alexandra’s Imperial Military Nursing Service. On 26 November 1942, Hettie was aboard the SS Ceramic, which left Liverpool in convoy ON-149. Early in the morning of 7 November 1942, Ceramic was hit by a torpedo from the German submarine U-515. A few minutes later two more torpedoes struck the engine room below the waterline. The Ceramic stayed afloat and three hours later U-515 hit the ship with two more torpedoes, which broke her in two and she sank immediately. Aboard Ceramic were 264 crew members, 14 gunners, 244 military and naval passengers (mostly nurses of the Queen Alexandra’s Imperial Military Nursing Service) and 133 passengers, among them 12 children. There were no survivors. Hettie is commemorated on the Brookwood Memorial, Surrey. 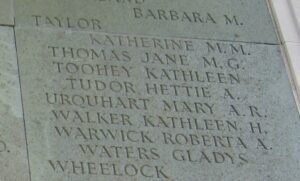 David Glanmor Williams, Pilot Officer, 160521, Royal Air Force Volunteer Reserve. David was the son of Mr. and Mrs. Evan Williams, of Bryn Eglur, Beulah, and the husband of Gwen Williams, of Pontyberem. He served as a Pilot with 14 Squadron, Royal Air Force, which flew the Martin B-26 Marauder, based at Protville, and flew anti-submarine patrols. David was killed on 19 October 1943 while flying aboard Marauder FK127 which crashed in the Mediterranean following a mechanical failure. He was 23 years old, and is commemorated on the Malta Memorial, Malta. 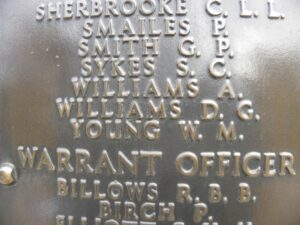