The foundation stone for Saint Paul’s Welsh Wesleyan Methodist Chapel in Upper Great Darkgate Street was laid in October 1878 and the chapel opened in 1879. It remained open as a place of worship until 1992. The war memorials in the chapel, two from WW1 and another from WW2, were then moved to the new Saint Paul’s Methodist Centre in Queen’s Road. 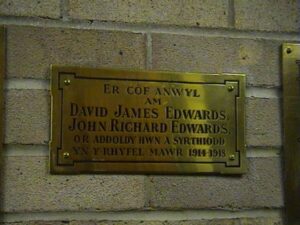 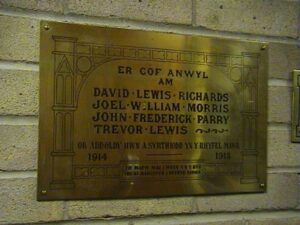 David James Edwards, Gunner, 190346, Royal Field Artillery. David was born in Aberystwyth in 1883, the son of Evan and Anna Marie Edwards of 48, Cambria Street, Aberystwyth. Sometime before the start of the War, David had met and married Elizabeth Roberts, the daughter of Thomas and Mary Roberts, of Lower Gosport Street, Laugharne. In 1916, David was called up and became a Gunner in ‘A’ Battery, 296th Brigade, Royal Field Artillery, which was attached to the 59th (Second North Midland) Division. In April 1916, the Division moved to Ireland to help quell the Republican uprisings that were gathering momentum at the time, and took part in the fighting of the Easter uprising. In January 1917 the Division returned to England, before heading to France in February, moving to Ypres. David was part of the crew of a Gun Battery that took part in the shelling of the German Lines which marked the beginning of the Battle of the Menin Road, on 20 September 1917. After weeks of heavy fighting, the artillery was slowly moved forward, keeping pace with the slow advance of the infantry. David was wounded at the Battle of Polygon Wood, and was brought back to the Casualty Clearing Station at Dozinghem, where he died of his wounds on 29 September 1917, aged 33. He is buried in Dozinghem Military Cemetery. 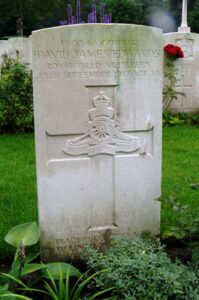 John Richard Edwards, Private, 53766, Cheshire Regiment. John was born in 1899, the son of Robert Edwards, of 4, Powell Street, Aberystwyth. He enlisted on 2 March 1916 at Brecon into the Training Reserve Battalion, and was posted to France on 30 May 1918, joining the 1st Battalion, Cheshire Regiment, which was attached to 15 Brigade, 5th Division. On 14 August 1918, 5th Division was in GHQ Reserve, and two weeks later began its part in the famous advance to victory. The Division took part in the advance from Albert towards the Hindenburg Line, fighting through Irles, Beugny, Havrincourt, Gonnelieu and the River Selle, and finally into Valenciennes and the River Sambre. John was killed in action after being struck by shrapnel in an attack on a village on 23 October 1918. He was 18 years old, and is commemorated on the Vis-En-Artois Memorial, France. 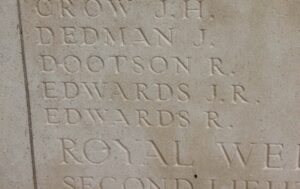 Trefor Lewis, Private, 77027, Royal Army Medical Corps. Trefor was the son of James and Elizabeth Lewis of Willows, 27, Portland Street, Aberystwyth. He was employed on the clerical staff of the National Library of Wales and a member of St Paul’s Chapel, prior to enlisting into the Royal Army Medical Corps. Trefor was posted to the 5th Field Ambulance, Royal Army Medical Corps, which was attached to the 2nd Division. The Division had been in France since the outbreak of war, and had fought in the retreat from Mons to the Marne. The 2nd Division was then moved to Flanders, and fought at the First Battle of Ypres, when the German sweep through Flanders was stopped, remaining there throughout the first winter of the war. In 1915 they took part in the Battle of Festubert, and in September fought at the Battle of Loos, and subsequent Action of Hohenzollern Redoubt. In the summer of 1916 the Division was on the Somme, and took part in the Battle of Delville Wood. Trefor was wounded here on the 8 August 1916. He was repatriated back to the UK and admitted into Hampstead Hospital where he died on 20 August 1916, aged 20. Trefor was buried with full military honours in Aberystwyth Cemetery.

Joel William Morris, Gunner, W/1386, Royal Field Artillery. Joel was born in 1890, the son of Rees and Sarah Morris, of Rose Cottage, Queens Street, Aberystwyth. He worked at Brynamman, and enlisted at nearby Ammanford into the Royal Field Artillery, serving in their ‘B’ Battery, 122nd Brigade, attached to the 38th (Welsh) Division. By 5 December 1915, the Division had disembarked at Boulogne, and during the winter and spring of 1916 held the line in French Flanders, before moving south to the Somme, where they fought at Mametz Wood. After a year in reserve, they fought at Pilckem Ridge and Langemarck, during the Third Battle of Third Ypres. Joel was killed in action during the Battle of Langemarck on 14 August 1917. He was 24 years old, and is buried in Canada Farm Cemetery, Belgium. 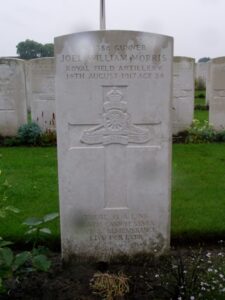 John Frederick Parry, Lance Corporal, 32518, Welsh Regiment. John was born in Capel Bangor, the son of David Griffith Parry and Elizabeth Parry, of Neuadd Villa, Taliesin, Glandyfi, Cardiganshire. Prior to the war the family had moved to Brynawel Hotel, Aberystwyth. John enlisted there into the 15th Battalion, Welsh Regiment, which was known as the Carmarthen Pals battalion, attached to 114 Brigade, 38th (Welsh) Division. On 2 December 1915 the battalion moved to France, and the entire Division moved to the Fleurbaix sector, where it was initiated into trench warfare. During June 1916 the Division marched south to the Somme, and on 7 July 1916 attacked Mametz Wood. The initial attack failed, and it was three days later, on 10 July, that a fresh attack was mounted. After two days of heavy hand to hand fighting within the wood, the Germans withdrew, and the battered Welshmen moved via Hébuterne to Boesinghe, on the Yser Canal, where it remained until launching its attack on Pilckem Ridge on 31 July 1917. The 15th Welsh remained in the line, and also took part in the Battle of Langemarck, before the entire Division was moved to positions near Armentieres over the winter. After the Germans launched their offensive on the Somme on 21 March 1918, the Division was moved back to the Somme, and took up positions north of Albert, around Aveluy Wood. On 10 May 1918, the 15th Welsh attacked the German positions in Aveluy Wood, supported by an artillery barrage. The artillery officer had miscalculated the range, and their fire was brought down on the 15th Welsh, who suffered heavy casualties. John was badly wounded in Aveluy Wood, suffering a gunshot wound to his right leg and a fractured fibula, and died at Doullens that same day. He was 28 years old, and is buried in Doullens Communal Cemetery Extension, France. 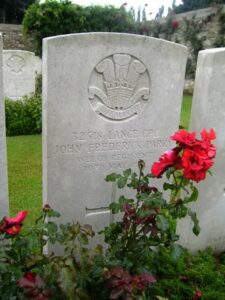 David Lewis Richards, Private, 46064, Royal Welsh Fusiliers. David was born at Llangynfelyn in 1887, the son of Jane Richards. David later resided with his mother at Grove House, North Road, Aberystwyth. He enlisted at Aberystwyth into the army on 10 December 1916, and was posted to France on 7 October 1916, joining the 14th Battalion, Royal Welsh Fusiliers, which was attached to 113 Brigade, 38th (Welsh) Division. David joined the battalion at Boesinghe, and was posted to D Company. He had only been in Belgium a matter of weeks, when he was shot in the head whilst in the front line. David died at Proven on 27 October 1916 aged 19, and is buried at Mendinghem Military Cemetery, Belgium. 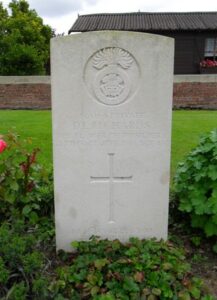 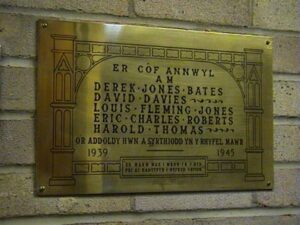 Derek Jones Bates, Flight Sergeant, 1684954, Royal Air Force Volunteer Reserve. Derek was the son of Henry Walter Bates and Lilian Scandrett Bates (nee Jones), of Hale Cheshire. His mother was from Aberystwyth, and her brother, Robert Brython Jones, had been killed in 1918, during WW1. Derek’s father, a WW1 veteran, died in 1927, so Lilian moved back to Aberystwyth and Derek was educated at Ardwyn School. He enlisted into the Royal Air Force Volunteer Reserve at the outbreak of war and served with 114 Squadron, Royal Air Force Volunteer Reserve, which was based in the Mediterranean area from 1942 through to 1945, equipped with the Douglas Boston. The squadron took part in the invasion of North Africa and had moved to mainland Italy. On 21 February 1945 Derek was from a night intruder mission in the Treviso area aboard a Doglas Boston, Serial BZ460, when it crashed into the sea off Falconara, with the loss of all of her crew of four. Derek was 23 years old when he died that day and is commemorated on the Malta Memorial, Malta.

David Aeron Davies, Able Seaman, P/JX 224550, Royal Navy. David was born at Tonypandy on 22 September 1917, the son of Ivor and Elizabeth Davies. The family later resided at Aberystwyth. David served on the destroyer HMS Beverley which saw service in the North Atlantic. Whilst providing escort for convoy ON 176 southwest of Iceland she sustained serious damage in a collision with SS Cairnvalona causing her to drop to the rear of the convoy. Two days later, on 11 April 1943 and with her anti-submarine gear damaged she was hit by a torpedo during a night attack by U-188, and sank with the loss of 151 lives. David was 25 years old when he died that day, and is commemorated on the Portsmouth Naval Memorial, Hampshire.

Louis Fleming Jones, M.A., Sub-Lieutenant, Royal Naval Volunteer Reserve. Louis was the son of Edward and Elizabeth Jones, of Aberystwyth. He served with the Royal Navy aboard H.M. Submarine Simoom. Simoom went on patrol from Port Said to the Aegean on 2 November 1943. Three days later she was diverted to the entrance of the Dardanelles Straits. She was supposed to have the returned to port, but was never seen again. The Admiralty declared her as having officially been lost on 19 November 1943. The cause of her loss has never been verified. Louis was 24 years old when he died, and is commemorated on the Portsmouth Naval Memorial, Hampshire. 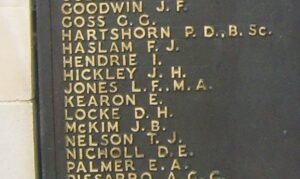 Eric Charles Roberts, Gunner, 907348, Royal Artillery. Eric was the son of John T. and Jennie Roberts of Aberystwyth, Cardiganshire. He served with 146 (Pembroke Yeomanry) Medium Regiment, Royal Artillery. Reformed as field artillery, the Pembroke Yeomanry’s Cardiganshire Battery became a separate Regiment on the outbreak of the Second World War, and was numbered the 146th Field Regiment. They landed in Suez in September 1942, joining the Eighth Army in time for the battle of El Alamein, then forming part of the 7th Armoured Division Artillery until the ‘Desert Rats’ left Italy in 1944. Converted to medium artillery in England, the Regiment disembarked in France in July 1944, taking part in the drive through Northern France into Belgium and Holland. Eric was killed in action on 2 Nov 1944, aged 25, and is buried in Venray War Cemetery, Netherlands.

Harold Thomas, Chief Officer, Merchant Marine. Harold was the son of Captain Thomas and Sarah Ann Thomas, of Aberystwyth. He served with the Merchant Navy aboard the SS Ocean Crusader, a British registered Liberty ship. On 26 November 1942, she was on her maiden voyage from Portland, Maine, to Avonmouth, UK, when she was torpedoed and sunk by the German submarine U -262, northeast of St John’s, Newfoundland, going down with all hands. Harold was 43 years old, and is commemorated on the Tower Hill Memorial, London. 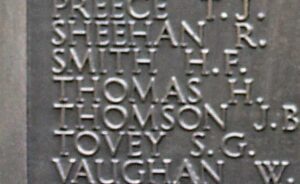