St David’s Church at Aberystwyth was founded in 1872 for English-speaking members in Aberystwyth, and was formerly known as Bath Street Presbyterian Church. In 1985 the church joined Portland Street United Reformed Church to form the new Church of St David’s. I do not presently have a photograph of this memorial, so the details have been taken from the Dyfed FHS monument survey.

David Hubert Evans, Private, 50167, Welsh Regiment. Hubert was born at Llanidloes in 1888, the eldest son of Richard and Annie Evans. The family later resided at Madoc House, Queens Road, Aberystwyth. David enlisted at Cardiff into the Welsh Regiment, and served on the Western Front from early in 1917 with one of the Service Battalions of the regiment. Hubert was invalided home from France and after recovering was stationed at Redcar, Yorkshire, with the 3rd Battalion, Welsh Regiment. It was there that he contracted pneumonia and died on 16 January 1918 at Red Barnes Hospital, Redcar, his parents being present at his death. His remains were brought home to Aberystwyth by Sergeant Herbert, of the 3rd Welsh, before burial in Dolhafren Cemetery, Llanidloes, Montgomeryshire. 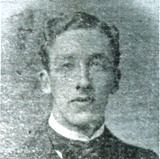 Richard Parry Evans, Second Lieutenant, Royal Welsh Fusiliers. Richard was the son of Moses and Mary Evans, of 1, Waun Wen Terrace, Nantymoel, Bridgend. On 1 March 1917 he was commissioned from Aberystwyth University OTC into the Royal Welsh Fusiliers, and was posted to France, joining the 1st Battalion, Royal Welsh Fusiliers, which was attached to 22 Brigade, 7th Division. Richard joined up with the battalion in time to take part in the Battle of Arras. He was killed in action in Bullecourt on 14 May 1917, when he was spotted by a German sniper, and shot dead. Richard was 23 years old, and is buried at Bailleul Road East Cemetery, St. Laurent-Blangy, France. 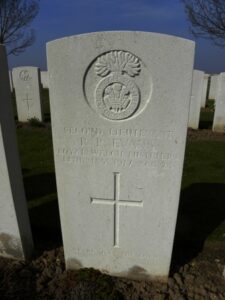 Cyril Mortimer Green, Captain, Royal Sussex Regiment. Cyril was the son of Thomas Mortimer Green and Catherine Green, of Aberystwyth, and the husband of Gwendoline Mortimer Green, of 23, Southwood Court, Golder’s Green, London. Cyril was a native of Denbigh, and had been educated at the University Colleges of Exeter, Carmarthen and Aberystwyth, along with his brother Hugh (see below), before being gazetted as Second Lieutenant into the 2nd Battalion, Royal Sussex Regiment in October 1914. Cyril served in France until he was severely wounded at Festubert on 9 May 1915, and returned home for treatment. Returning to the front, he was attached to the 16th Battalion, Royal Sussex Regiment, who were attached to 230 Brigade, 74th Division. The Division was taking part in the advance into Palestine, and had just successfully fought in the Third Battle of Gaza, when Cyril was killed in action on 6 November 1917. He was 29 years old, and is buried at Beersheba War Cemetery, Israel. 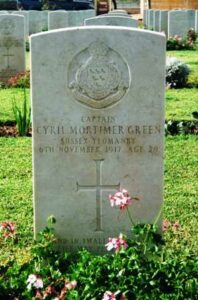 Hugh Mortimer Green, Captain, Welsh Regiment. Hugh was the son of Thomas Mortimer Green and Catherine Green, of Aberystwyth, and the Brother of Cyril Mortimer Green (see above). Hugh was educated at Carmarthen University along with Cyril, and was gazetted into the Welsh Regiment. He was posted to the 1/4th Battalion, Welsh Regiment, which was the local Territorial Battalion, attached to 159 Brigade, 53rd (Welsh) Division. The Division landed at Cape Helles, Gallipoli, on 9 August 1915, and was immediately thrown into action, spending the next few days in isolated pockets. Hugh was killed in action on 10 August 1915 at the Battle of Sari Bair (Attack on Scimitar Hill). He has no known grave, and so is remembered on the Helles Memorial, Gallipoli. 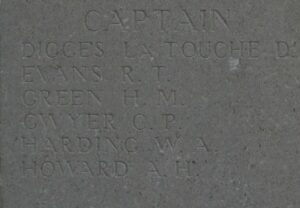 Frank Hinton Jones, Private, 28325, King’s Own (Royal Lancashire Regiment). Frank was born in 1897, the son of John Jones, of 61, North Parade, Aberystwyth. He enlisted at Aberystwyth on 25 October 1915 into the Army Service Corps, and was posted to France on 25 November 1915. Frank was wounded on 23 January 1916, and sent to the 4th Field Ambulance, before being invalided to Britain. Upon his recovery, on 24 September 1917 he was transferred to the 8th Battalion, King’s Own Royal Lancashire Regiment. The battalion was attached to 76 Brigade, 3rd Division, and Frank joined them at Ypres, where they fought in the Third Battle of Ypres, at the Battle of the Menin Road and the Battle of Polygon Wood. In November the Division moved south again, where they fought at the Battle of Cambrai, and they were in the area during March 1918 when the German Spring Offensive swept through the British lines, at the Battle of St Quentin and the First Battle of Bapaume. They then fought at the First Battle of Arras 1918 before being moved to Flanders to rebuild. However the Germans switched the focus of their offensive to Flanders, and the Division were caught up in the worst of the fighting there, at the Battle of Estaires. Frank was killed in action here on 13 April 1917, aged 19, and is commemorated on the Ploegsteert Memorial, Belgium. 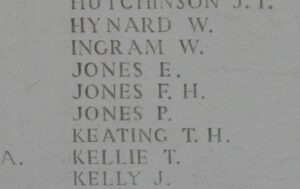 James Frederick Samuel, Second Lieutenant, Royal Welsh Fusiliers. James was born in 1897, the son of Evan Isaac and Julia Alice Samuel, of Prospect House, 58, Cambrian Street, Aberystwyth. He enlisted during Easter week 1916 into the Royal Welsh Fusiliers, and was quickly promoted to Lance Corporal, landing in France in January 1917. A former member of the College OTC, he received a commission on 26 June 1917 into the 13th Battalion, Royal Welsh Fusiliers, which was attached to 113 Brigade, 38th (Welsh) Division. James fought at the successful Battle of Pilckem Ridge, and the Battle of Langemarck. The Division then moved to Armentieres, where it remained from September 1917 until March 1918 when the German Spring Offensive was launched. The British had been over-run on the Somme, and so in April the Division was moved South, taking up positions North of Albert. On 22 April 1918, 113 Brigade was ordered to advance, and capture the heights of Bouzincourt Ridge, to secure observation over the Ancre Valley. In what was described as a minor affair, the brigade achieved its objective, but the 13th Royal Welsh Fusiliers lost six officers and sixty two other ranks dead. Among them was James who is buried in Bouzincourt Ridge Cemetery, France. 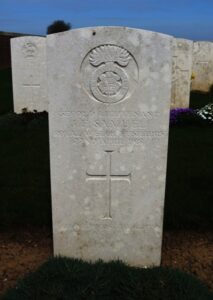 Linus Evans, Captain, 217383, Royal Welch Fusiliers. Linus was born at Aberdovey on 10 August 1912, the son of John and Eleanor Evans. He worked as a bank clerk at Aberystwyth prior to the war and played football for Aberystwyth FC. He married Margaret Magdalen Elizabeth Seaton, a GPO telegraphist, at Aberystwyth early in 1940. Linus was commissioned into the 6th Battalion, Royal Welch Fusiliers, and spent the early part of the war on home service. The battalion landed on the Normandy beaches on the end of June 1944, attached to the 53rd (Welsh) Division, and took part in the break-out from the Normandy beach-head. It then played an important role in the advance through Northern France into Belgium and Holland, towards the German frontier. On 19 January 1945 the Division moved from Liege to an area just east of Eindhoven to prepare for Operation Veritable – the crossing of the Rhine. The Division was to attack in the northern edge of the mighty Reichswald Forest and take the town of Goch. Linus was killed whilst fighting around the Reichswald Forest on 8 February 1945, the first day of the attack, but by midnight his battalion had broken the Siegfried Line. He was 32 years old, and is buried at Reichswald Forest War Cemetery, Germany. 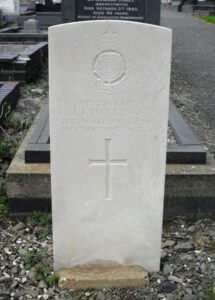 Evan John Stephens, Sergeant, 967065, Royal Air Force Volunteer Reserve. John served with the 335th Fighter Group, Royal Air Force, which was based at RAF Steeple Morden, in Cambridgeshire. Evan was posted to No 11 Operational Training Unit for conversion training on the Vickers Wellington. On 24 August 1940 he was flying as air gunner aboard Wellington Ia, Serial N2945, which was on a night navigation exercise off the Isle of Man when the aircraft crashed into the sea off Bradda Head, killing all her crew of eight. Only four bodies were recovered. Evan was 20 years old when he died that night, and is commemorated on the Runnymede Memorial, Surrey.

David John Williams, OBE, Master, Merchant Navy. David was the son of David Williams, and of Annie Williams, of Aberystwyth. He was a long serving Mariner, and had been awarded the Lloyd’s Medal for lifesaving at sea, and also created an Officer of the British Empire. David served as Master of the SS Empire Tower, a London registered cargo steamer. On 5 March 1943, she was on route from Huelva and Gibraltar for Middlesbrough when she was torpedoed by the German submarine U-130, and sunk with the loss of 38 lives. David was 38 years old when he died that day, and is commemorated alongside his crew on the Tower Hill Memorial, London. 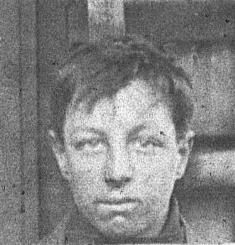