Skinner Street Schoolroom was built in 1839 to provide for the spiritual and educational needs of the inhabitants of Aberystwyth. The memorial commemorates two members of the Sunday school who fell during the Great War. Prior to demolition of the building in 2003 the memorial was removed from the schoolroom to Ceredigion Museum. 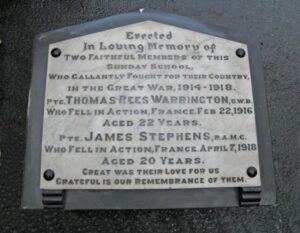 James Stephens, Private, 84505, Royal Army Medical Corps. James was the son of William and Mary Elizabeth Stephens, of 3, Spring Gardens, Trefechan, Aberystwyth. He enlisted at Aberystwyth on 19 September 1916 into the Royal Army Medical Corps, and was posted to France on 4 April 1918, joining the 58th Field Ambulance, Royal Army Medical Corps, which was attached to the 19th (Western) Division. The Division had just moved to positions near Messines to rebuild after being decimated on the Somme the in March, following its desperate and gallant defensive action at Bapaume. James had only been at the front a few days, when he was killed in action on 18 April 1918 while doing good work as a stretcher-bearer. He is buried in Lijssenthoek Military Cemetery, Belgium. His father William had died just after enlisting in 1915, and his brother William Thomas Stephens had been killed at Ypres in 1917. 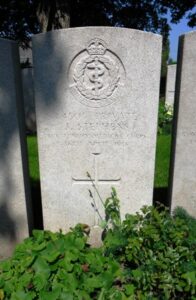 Thomas Rees Warrington, Private, 11413, South Wales Borderers. Thomas was born in 1896, the son of Edward Lloyd Warrington and Margaret Warrington (nee Jones), of 4, Fountain Road, Trefechan, Aberystwyth. He enlisted at Brecon into the South Wales Borderers. Thomas landed in France on 4 January 1915, joining the 1st Battalion, South Wales Borders, which was attached to 3 Brigade, 1st Division. The Division was in Flanders, and was rebuilding after the First Battle of Ypres. During 1915 the Division saw heavy fighting at the Battle of Aubers, before moving South to Loos, where they fought during the Battle of Loos in September 1915, and the action at the Hohenzollern redoubt. The Division remained at Loos over the winter, and in February 1916 the 1st SWB were in trenches at Les Brebis. On 22 February 1916, snow fell on the lines, and under the cover of the snow, a party of men were sent out to recover the bodies of several of their comrades which had lain in No Man’s Land for several weeks. Thomas was killed during the operation that day. He has no known grave, and is commemorated on the Arras Memorial, France. He was a faithful member of the Skinner Street Sunday School and had only recently been home on leave before returning to the trenches. 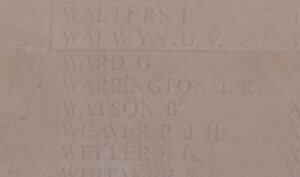