The memorial to Guardsman Thomas Davies, Welsh Guards, in Aberystwyth Police Station was erected by his fellow officers of the Cardiganshire Police Force. He is also commemorated on the Dyfed Powys Police War Memorial at Llangunnor and on the Llandyssul War Memorial. 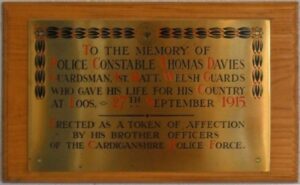 Thomas Davies, Private, 1446, Welsh Guards. Thomas was born in Nantybargod, Llangeler in 1889, the son of John and Mary Davies. The family later resided in Rhydgalfe, Llandyssul. His uncle was Inspector Edwards, of Aberystwyth Police. Thomas joined Cardiganshire Police and was stationed at Aberystwyth, where he lodged at 7, Trinity Road. He had been engaged to Miss Averina Evans, of Llanrhystud, but she sadly died in 1914. Like so many other of his fellow Policemen, he enlisted into the Welsh Guards after their formation by Royal Warrant on 26 February 1915. The battalion mounted Guard at Buckingham Palace on St. David’s Day 1915 and landed at Havre on 8 August 1915, where they were attached to 3 Guards Brigade, Guards Division. The Welsh Guards saw their first action at the Battle of Loos the following month. The battalion had moved into positions in the ruined village of Vermelles on 26 September and slept in a trench before being roused for breakfast on the following morning and warned to be ready to move into the front line. At 2.30 pm the battalion moved off into Loos under heavy fire and made their way into the village where they received their orders. The battalion advanced at about 6.20 pm alongside the 4th Battalion, Grenadier Guards, and captured two rows of enemy trenches before being held up and were ordered to dig in. Thomas was seen to fall wounded during the initial advance, and was falsely reported to have been taken prisoner by the Germans. No further news of him was ever received, nor was any trace of him ever found, so he was later presumed to have been killed in action on 27 September 1915, aged twenty three. A fellow Policeman from Aberystwyth, David Mathias, was wounded at Loos on the same day, but survived the war. Thomas has no known grave, and is commemorated on the Loos Memorial, which overlooks the village where he fell. 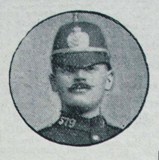