Eglwys y Santes Fair (in English St Mary’s Church), is situated in Gray’s Inn Road, Aberystwyth, and caters for the Welsh speaking congregation. Within the church is a fine wooden War Memorial, which commemorates the men of its Parish who fell during the Great War, all of whom are commemorated on the main Borough Memorial. The photograph of the memorial is courtesy of Gil Jones, while most of the portraits of the men are courtesy of Ceredigion Archives. 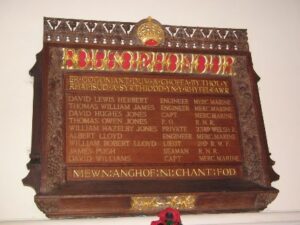 David Lewis Herbert, Engineer Mercantile, Marine. David was the son of Margaretta Herbert, of 27, Bridge Street, Aberystwyth. He was a long serving mariner, and by the outbreak of war was serving as Chief Engineer aboard the SS Reims, a transport steamer. David took ill whilst aboard Reims, whilst on voyage to Italy with a cargo of coal for the Italian Government. At the end of May 1917 his parents received a cable say he had been landed in Spain and taken to Aquilas Hospital where he later died on 17 May 1917. David is not commemorated by the Commonwealth War Graves Commission. 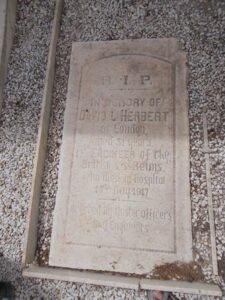 Thomas William James, First Engineer, Mercantile Marine. Thomas was the son of David and Mary Jane James (nee Rees), of 11, Sea View Place, Aberystwyth. He served with the Mercantile Marine as First Engineer on the SS Kildonan, a Cardiff registered steamer. On 26 October 1917, Kildonan was carrying a cargo of ore when she was torpedoed and sunk by the German submarine U-35. Thomas was 26 years old when he died that day, and is commemorated on the Tower Hill Memorial, London.

David Hughes Jones, Master, Mercantile Marine. David was born in Aberystwyth in 1858. He married Elizabeth Jones, of Aberystwyth, in 1883, and the couple set up home at Bodawen, Llangrannog. David had been at sea for 47 years by the time that war broke out. He served with the Mercantile Marine aboard the SS Greldon. On 8 October 1917, Greldon was torpedoed without warning whilst about seven miles off Ireland by the German submarine U-96, and sank with the loss of 28 lives, including David, who is commemorated on the Tower Hill Memorial, London.

Thomas Owen Jones, Seaman, 4056A, Royal Naval Reserve. Tommy was born at Carnarvon on 22 April 1893, the son of Anne Jane Jones. His father was a mariner and was often at sea, and by 1911 the family was living at 14 Prospect Street, Aberystwyth. Thomas was a member of the Royal Naval Reserve in Aberystwyth and on 4 August 1914 he and his fellow reservists entrained for Devonport. Tommy was one of fifteen men from the town who served on HMS Jupiter which saw service in the White Sea during February and March of 1915. Her task was to ensure the passage to Archangel, Russia was kept clear of ice so that supplies for the Russian Army could continue to flow. In recognition of their service the Emperor of Russia, Tzar Nicholas II, conferred on the officers and men the Russian Medal for Zeal. On his return to Aberystwyth Tommy married Margaret, of 23, Portland Rd, Aberyswyth. He was then transferred to the mine sweeper HMPMS Nepaulin. She was the Clyde paddle steamer Neptune converted for mine sweeping duties with the Dover Patrol because of her shallow draft. On 20 April 1917 she struck a mine off the Dutch coast and sank taking eighteen crew to the bottom. Tommy was at the wheel at the time of his death and is commemorated on the Plymouth Naval Memorial. He left a wife and young child. 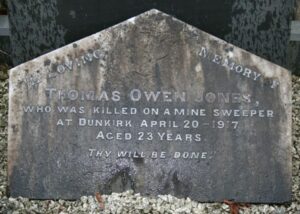 William Hazzelby Jones, Private, 42019, Welsh Regiment. William was the husband of Elizabeth Jones, of 8, Princess Street, Aberystwyth. He enlisted at Aberystwyth into the Welsh Regiment, and was posted to the 23rd Battalion, Welsh Regiment. The battalion was known as the Welsh Pioneers, and formed at Porthcawl in September 1915. In March 1916 it moved to Aldershot, becoming attached to the 69th Division, and on 13 July 1916 embarked at Devonport for Salonika, arriving on 24 August 1916, joining the 28th Division as its Pioneer Battalion. William wasn’t at the front long, as he became ill, and died of malaria on 1 December 1916, aged 39. William is buried in Lahana Military Cemetery, Salonika.

David Albert Lloyd, Third Engineer, Mercantile Marine. David, known as Albert, was born in Aberaeron and was the son of David and Mary Lloyd. The family later resided at 36, Queen Street, Aberystwyth. David was a long serving seaman. On 1 May 1915 he survived when his ship, the SS Edale, was torpedoed by the German submarine U-30, whilst on voyage from Argentina to Liverpool. Upon returning to Britain, he was posted aboard the SS Blake, a London registered steamer. On 24 July 1917, Blake was torpedoed and sunk by the German submarine UC-49, whilst on route from Penarth to Archangel, with the loss of five lives. David was 29 years old when he died that day, and is commemorated on the Tower Hill Memorial, London. John Richards of 30, South Road was Second Engineer on the same ship and survived. He said she sank inside two minutes and of the 56 on board, 51 were saved but Albert was missing.

William Robert Lloyd, Second Lieutenant, Royal Welsh Fusiliers. William was born in 1894, the son of William and Elizabeth Jane Lloyd, of Bronglais, Aberystwyth. He was educated at Corris National School, Dolgellau County School and Grove Park School, Wrexham, prior to becoming the assistant master at Bedwellty Poor Law Institution. He originally enlisted into the Royal Army Medical Corps, but was commissioned into the 15th Battalion, Royal Welsh Fusiliers on 26 June 1917, landing in France on 12 August 1917 to join up with the battalion, which was attached to 115 Brigade, 38th (Welsh) Division. The Division had just had its epic fight at Pilckem Ridge. After being relieved from the Ypres sector, the 38th Division moved back to Armentieres, to rest and rebuild, but in March 1918 moved south to take over the Aveluy Wood sector, north of Albert, on the Somme. Here, William was attached to the 2nd Battalion, Royal Welsh Fusiliers, which had recently joined the Division. On 12 July 1918, the 2nd RWF were tasked with a raid on the German positions at Hamel. After a short barrage, the men went forward into the German lines, and a tremendous fight ensued, but the raid was successful, with 19 prisoners and a machine-gun captured, and over 50 Germans killed. Casualties amongst the 2nd RWF were relatively light, but William had been killed that day, and was left in No Man’s Land. He was 24 years old, and is commemorated on the Pozières Memorial, France. In a letter home to William’s parents, Lieutenant E. E. Lloyd, 2nd RWF, said that William was leading a raid on a village one night and had reached the other side when they came under heavy trench mortar fire, and though wounded he continued to lead until he fell mortally wounded. 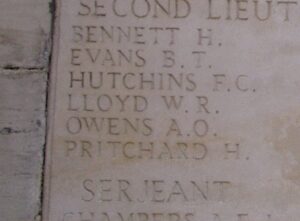 James Pugh, Seaman, 3224/B, Royal Naval Reserve. James was born on 18 August 1884, the son of James and Elizabeth Pugh, of Portland Street, Aberystwyth. Prior to the war he resided with his wife, Mary Pugh, at Chepstow House, Portland Road, Aberystwyth. He was a member of the Royal Naval Reserve in Aberystwyth and left for Devonport with his colleagues when mobilised on 4 August 1914. Like many of the Aberystwyth contingent he served on HMS Jupiter and was awarded the Russian Medal for Zeal for service in the White Sea in the winter of February and March 1915. In June 1918 he was mentioned in dispatches for good work in connection with minesweeping but in the last months of the war he died in hospital in Portsmouth of influenza 12 October 1918. He was 34 years of age and is buried in Haslar Royal Naval Cemetery, Portsmouth.

David Williams, Captain, Mercantile Marine. David was the husband of Catherine Williams, of 21, Queen Street, Aberystwyth. He was a long serving mariner and by the outbreak of war was Chief Officer of the steamship SS South Pacific. David contracted dysentery while at sea in the Mediterranean and died at Bona, Algeria on 17 October 1916. He is not commemorated by the CWGC.