Whitland is an ancient market town, most well known for being the place where Hywell Dda sat in Parliament and created the first laws. The town is sited along the main A40 road from St Clears into Pembrokeshire, and is about six miles east of Narberth. In the front yard of the Congregational Chapel in West Street is a War Memorial in the form of a Celtic Cross, which holds the names of its members who fell during both World Wars. 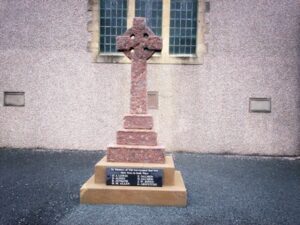 Harry Montague Allen, Private, 20965, Welsh Regiment. Harry was born in Prendergast, Haverfordwest, in 1896, the eldest son of Thomas and Edith Allen, and the family later resided at 3, Glendale Terrace, when Thomas moved with the GWR to work at Whitland. Harry followed his father into the Railway, becoming a Carpenter at the Llanelli Depot. At the outbreak of War, Harry was enlisted into the Army, entering the 15th Battalion, Welsh Regiment, known as the Carmarthen Pals Battalion. After training at Rhyl and Winchester, the battalion moved to France during December 1915 attached to 114 Brigade, 38th (Welsh) Division. During the coming months the Battalion held nearly every section of the British line from Givenchy on the La Bassée Canal to Laventie, about six miles South of Armentières. At the end of May 1916, the Battalion moved South with the remainder of the 38th (Welsh) Division to the Somme area, in readiness for the First Battle of The Somme, which commenced on 1 July 1916. The 38th Division were tasked with the taking of the infamous Mametz Wood, and the Division made its first assault on 7 July 1916, suffering terrible casualties. After the sacking of their Commander, Sir Ivor Philipps, the Division made a renewed assault on 10 July 1915, and the Carmarthen Pals were thrown into action, and plunged into terrible fighting at the ‘Hammerhead’. The wood was cleared with two days of terrible hand to hand fighting, but at the cost of over 5,000 casualties in the 38th (Welsh) Division. It was during the first attacks on the wood that Harry was shot in the chest by a German sniper, and brought back by rail to the 38th Casualty Clearing Station at Heilly, in the Somme valley. Harry died of his wounds on 11 July 1916, and was buried in Heilly Station Cemetery, France. He is also commemorated at Lampeter Velfrey and on the new GWR Memorial at Llanelli Goods Shed. 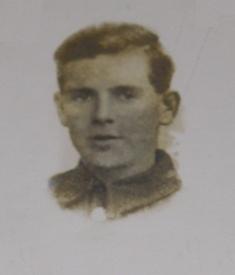 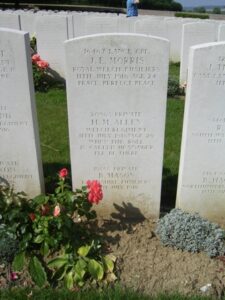 David James, Private, 35439, Gloucestershire Regiment. David was born at Beckenham, Kent in 1882, the son of George and Emma James. The family later moved to Whitland, where they named their new home in Market Street Beckenham House. David enlisted into the Army in Carmarthen, joining the Royal Engineers, with the service number 224035, but was later transferred into the 13th Battalion, Gloucestershire Regiment. The battalion served as the Pioneer Battalion in 39th Division. The Division moved to France at the end of February and early March 1916, and on 30 June 1916 it took part in a very costly attack in the area of Richebourg l’Avoue, which is not officially recognised as a separate engagement. The Sussex Battalions in particular suffered very heavy casualties. The Division moved to the Somme in August 1916, where it fought at the Battle of the Ancre Heights, where they captured the Schwaben Redoubt, and helped capture Regina Trench. They then fought at the Battle of the Ancre, and remained on the Somme over the winter. In 1917 the Division were at Ypres, and fought at the Battle of Pilckem, the Battle of Langemarck, the Battle of the Menin Road, the Battle of Polygon Wood and the Second Battle of Passchendaele. During the beginning of 1918 they were stationed near St. Quentin, and were one of the Divisions to be hit hard here by the German Offensive which was launched on 21 March 1918. They fought here at the Battle of St Quentin, and falling back fought at the Actions at the Somme Crossings and the Battle of Rosieres. They were moved to Flanders to rest, but April was to see the Germans launch an attack here at the Lys, and the Division fought at the First Battle of Kemmel. David was killed here on 26 April 1918. He was 36 years old, and is commemorated on the Tyne Cot Memorial, Belgium. He is also commemorated on the family grave at Zoar Chapel, Whitland. 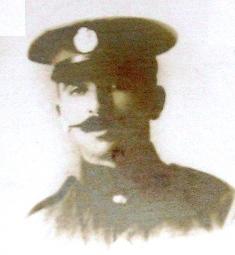 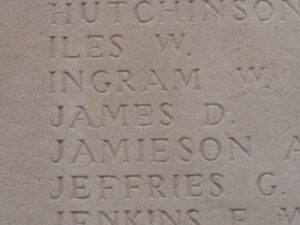 Richard Jenkins, Private, 201048, Welsh Regiment. Richard was the son of the late William and Elizabeth Jenkins, of Llawhaden, Narberth. He enlisted at Llanelli into the 1/4th Battalion, Welsh Regiment, which was part of 159 Brigade, 53rd (Welsh) Division. Richard survived the battalion’s time at Gallipoli, and moved to Egypt with them during the withdrawal from Gallipoli. After a year fighting Arab tribesmen in Egypt, the division moved into Palestine, and Richard was killed here, during the Second Battle of Gaza, on 20 April 1917. He was just 21 years old, and is buried at Deir El Belah War Cemetery, Egypt. 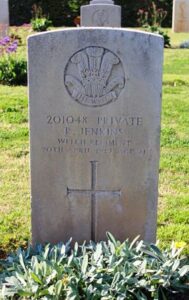 David James Lewis, Private, 5139, Welsh Regiment. David was the son of Thomas Lewis and Minnie Lewis (nee Davies). The family was from Narberth, but had resided for several years at Aberdare, before moving to 17, Waterloo Terrace, Pembroke Dock. David worked as a Porter for the GWR prior to the war, before becoming a signalman at Henllan Station. He enlisted at Carmarthen into the local Territorial Battalion, the 1/4th Battalion, Welsh Regiment, which was attached to 159 Brigade, 53rd (Welsh) Division. The Division moved to the Mediterranean, sailing from Devonport in July, 1915 arriving at Mudros by 5 August 1915. From here they moved to Gallipoli, landing on 9 August. Here the Division was immediately thrown into action, and spent the next few days in isolated pockets, fighting against a Turkish counter-attack during the Battle of Sari Bair, and then at the Attack on Scimitar Hill. David was killed here on 23 August 1915, aged 22. He is buried at Hill 10 Cemetery, Gallipoli. 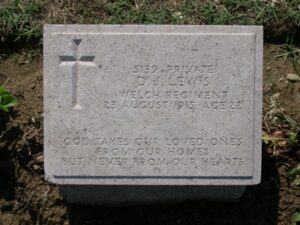 David Salmon, Private, 31204, Royal Welsh Fusiliers. David was the son of John and Sarah Salmon, (and the brother of Evan below) of Lowlands, Narberth. Their mother, Sarah, was from St. Clears, and the brother often visited family there. David enlisted at Carmarthen with his brother, originally into the Royal Field Artillery, with consecutive service numbers 98763 and 98764. Both brothers then transferred into the 1st Battalion, Royal Welsh Fusiliers, part of 22 Brigade, 7th Division. The Division had served on the Western Front since 7 August, 1914, and by early 1916 were stationed on the Somme. David was wounded on 6 February 1916, and died of wounds that same day, aged 21. He is buried at Point 110 New Military Cemetery, Fricourt. 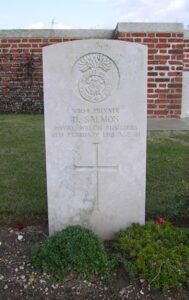 Evan Salmon, Private, 31203, Royal Welsh Fusiliers. Evan was the son of John and Sarah Salmon, (and the brother of David above) of Lowlands, Narberth. Their mother, Sarah, was from St. Clears, and the brother often visited family there. Evan enlisted at Carmarthen with his brother, originally into the Royal Field Artillery, with consecutive service numbers 98763 and 98764. Both brothers then transferred into the 1st Battalion, Royal Welsh Fusiliers, part of 22 Brigade, 7th Division. The Division had served on the Western Front since 7 August, 1914, and by early 1916 were stationed on the Somme. Evan was mortally wounded, and died just a day after his brother, on 7 February 1916, aged 23. He is buried at Corbie Communal Cemetery Extension. 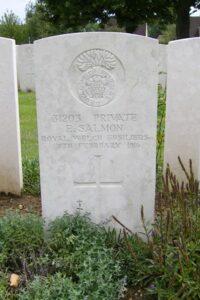 Gordon Wreford Griffiths, Leading Aircraftman, 1315678, Royal Air Force Volunteer Reserve. Gordon was born in Pembrokeshire in 1921, the son of Alfred and Winnifred Ann Griffiths. The family later moved to Mount Pleasant, Swansea.  Gordon volunteered to serve with the RAFVR, and was training as a Pilot when he was killed whilst flying Oxford I, R6072 of No 3 SFTS, which collided with Oxford N6267 of the same unit near Fishguard on 26 October 1941. Gordon was 20 years old, and is buried at Llanwnda Cemetery, Goodwick. 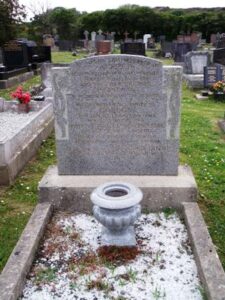 John Wynford Jones, Flight Sergeant, 1062633, Royal Air Force Volunteer Reserve. John served in 103 Squadron, R.A.F., which was reformed in 1936 due to the growing German threat. They were based in France at the outbreak of war, as part of the Advanced Air Strike Force, equipped with the obsolete Fairey Battle, but were withdrawn in June 1940 when the situation in France became critical. After spells at RAF Abingdon and Newton, they took up permanent residence at R.A.F. Elsham Wolds in July 1941, as part of 1 Group, Bomber Command. By now they had been re-equipped with the Vickers Wellington, and were taking part in the 1,000 bomber raids on Nazi Germany. In July 1942 they were equipped with the Halifax, but they proved to be not up to the job, and after heavy losses the squadron converted to Lancasters three months later. They squadron now took part on bombing missions over the industrial Ruhr Valley, and on 22 June, 1943 took off as part of a 557 aircraft raid on Mulheim. The town was almost completely destroyed, but John and his Lancaster must have been shot down on the return flight, as John was killed the following morning on 23 June, 1943. He is remembered on the Runnymede Memorial, Surrey.