Rhandirmwyn is a small village in the north east of Carmarthenshire, which is situated in the upper Towy valley, just over a mile north of Cilycwm village in the parish of Llanfair-ar-y-bryn. The area was once home to a thriving lead mining community, but is very rural and is now more of a tourist haven. Rhandirmwyn Church houses a fine marble war memorial which commemorates the five men of the village who fell during the Great War. Another, sixth, man who had made Rhandirmwyn his home and married there in 1906, is for some reason omitted. His details are also below. 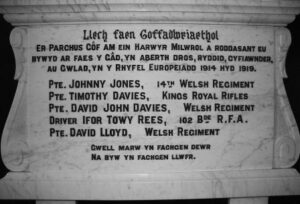 Arthur James Bolton, Private, 27997, Northamptonshire Regiment. Arthur was born in Aldershot in 1887, the son of Ellis and Elizabeth Bolton. He moved to west Wales prior to the war and married Alice May Davies in 1906. The couple lived in Bwlchnewydd, Rhandirmwyn, where their daughter and two sons were born. Arthur enlisted in Camberwell into the army and was posted to the 6th Battalion, Northamptonshire Regiment, which was attached to 54 Brigade, 18th (Eastern) Division. The division played a large role in several actions during the Somme battles of 1916. During the winter of 1916-17 it remained on the Somme, in terrible conditions. Arthur was killed in action on 17 February 1917 during his battalions assault on Miraumont Trench, as part of a larger operation in the Ancre Valley. The thirty year old has no known grave and is commemorated on the Thiepval Memorial, France. Arthur does not appear to be commemorated anywhere in west Wales.

David John Davies, Lance Corporal, 39870, Welsh Regiment. David was the son of John and Susan Davies, of 16, Chapel Street, Carmarthen, and had been a postman at Rhandirmwyn prior to the war. He enlisted at Llandovery into the Welsh Regiment. He was posted to France early in 1916, joining the 2nd Battalion, Welsh Regiment, which was attached to 3 Brigade, 1st Division. The Division had taken part in the Battle of Loos in September 1915, and during the summer of 1916 moved to the Somme. David was wounded on the Somme, at the Battle of Pozières, and died of wounds at the Casualty Clearing Station at Heilly on 24 July 1916, aged 30. He is buried at Heilly Station Cemetery, Mericourt-L’Abbe, France. 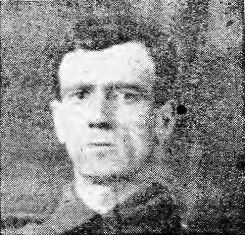 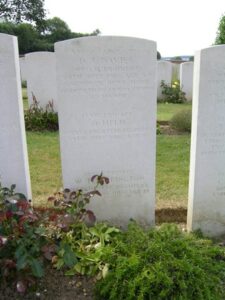 Timothy Davies, Private, R/17058, Kings Royal Rifle Corps. Timothy was born in 1892, the son of Thomas and Margaret Davies, of Cwmdinas, Rhandirmwyn, near Llandovery. He enlisted at Llandovery on 15 November 1915 into the King’s Royal Rifle Corps, and was posted to the 14th Battalion, King’s Royal Rifle Corps on 27 November 1916, sailing for France on 20 April 1916. On 24 May Timothy was posted to the 13th Battalion, King’s Royal Rifle Corps, which was attached to 111 Brigade 37th Division. The division moved to the Somme sector on 5 July 1916 and because the 34th Division had suffered so heavily during the opening of the Somme Offensive, 111 and 112 Brigade of the 37th Division were posted to them as reinforcements until 22 August 1916. During this period Timothy saw action at Bazentin, Pozières and Flers-Courcelette. The two Brigades rejoined their own Division in time for the attack in the Ancre Valley, where the 13th KRRC played an important role during the capture of Beaucourt. Timothy was reported as missing presumed wounded on 14 November 1916, but was afterwards declared killed in action that day. He was 24 years old, and is remembered on the Thiepval Memorial, France. 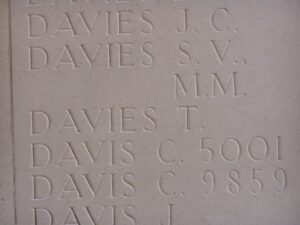 Johnny Jones, Private, 49546, Welsh Regiment. Johnny was the son of John and Jane Jones, of Penrhiwfach, Rhandirmwyn. He enlisted at Llandovery into the Welsh Regiment and was posted to France at some time in 1916, joining the 14th Battalion, Welsh Regiment, which was attached to 114 Brigade 38th (Welsh) Division. The Division had arrived in France during December, 1915 and had been initiated into trench warfare near Armentieres, before fighting at the Battle of Mametz Wood during the Somme Offensive in July 1916. The Division suffered badly at Mametz and were taken out of the line for almost a year, before taking part in the Third Battle of Ypres. Johnny joined the 14th Welsh at the beginning of July 1917, when it was training for its part in the forthcoming assault on Pilckem Ridge. He survived the main battle of 31 July 1917, when the Division captured all its objectives, but was Killed in Action at Langemarck on 22 August 1917, aged 22. Johnny has no known grave, and is commemorated on the Tyne Cot Memorial, Belgium. 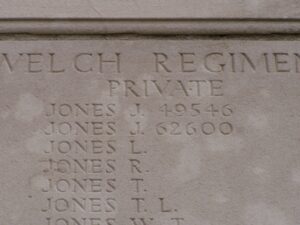 David Lloyd, Private, 320277, Welsh Regiment. David was the son of Mary Lloyd, of 16, Gernon Road, Roman Road, Bethnal Green, London. He worked as a farm servant at Penrhiwronen, Llanfair-ar-y-Bryn prior to the outbreak of war, and enlisted at Carmarthen into the Pembroke Yeomanry. In March 1916 the Pembroke Yeomanry sailed for Egypt as part of the 1st Mounted Division, which fought in the Palestinian Campaign. On 2 February 1917 the Battalion merged with the Glamorgan Yeomanry to form the 24th Battalion, Welsh Regiment, and were attached to 231 Brigade, 74th (Yeomanry) Division. The division then took part in the advance into Palestine. David was wounded during the Third Battle of Gaza. He died of wounds on 7 May 1917, aged 23, and is buried at Deir El Belah War Cemetery, Israel. 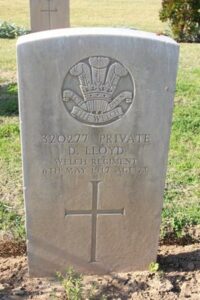 Ivor Towy Rhys, Driver, 730936, Royal Field Artillery. Ivor was born at Llanybydder in 1895, the son of the Reverend Rhys Towy Rhys and Margaret Rhys. His parents later resided at Wem Villa, Resolven, Glamorgan. Rhys was from Rhandirmwyn, and Ivor had spent a lot of time there with his family prior to the war. He enlisted at Cardiff into the Royal Artillery, and served with D Battery, 102nd Brigade, Royal Field Artillery, which was attached to the 23rd Division. Ivor was killed at Ypres on 28 May 1917. He was 21 years old, and is buried at Railway Dugouts Burial Ground, Belgium. 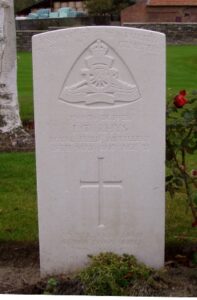