Red Roses is a small village situated on the crossroads of the A477 road from St. Clears to Tenby and the B4314, from Pendine to Tavernspite. The village borders Pembrokeshire, and comes under Eglwyscymmin Community, and in turn Laugharne Township. The village has its own war memorial, sited near the crossroads in a memorial garden which commemorates the five local men who fell during World War Two. One local man fell during World War One, but the memorial does not commemorate him. 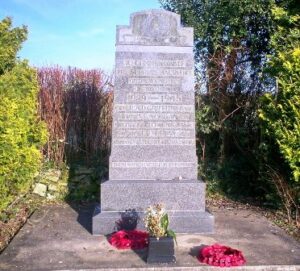 William John Howells, Captain, Welsh Regiment. William was born in White Lion Farm, Eglwys Cummin, in 1888, the son of Daniel Howells and Mary Ann Howells (nee John). He was raised by his Grandparents Ben and Mary John, at Brook, before being educated at Tremoilet School and Whitland Grammar Schools, before gaining a BA with Honours at Aberystwyth University. He then moved on to work in Lampeter University before the war broke out. William enlisted into the Welsh Regiment at the outbreak of hostilities, and was commissioned into the 8th Battalion, the Welsh regiment as a Lieutenant. The 8th Battalion formed at Cardiff during August 1914 as part of K.1. They were then attached to 40th Brigade, 13th Western Division.  The 40th Brigade assembled at Salisbury Plain along with 40 Division, and then moved to Chiseldon and Cirencester in September 1914. Toward the end of February 1915, the entire Division concentrated at Blackdown in Hampshire. On 7 June 1915 orders were received for the Division to move to the Mediterranean, then by 4 July from Alexandria to Mudros-preparing for the landing on Gallipoli. On 4 July 1915 the Division landed on Cape Helles and relieved the 29th Division. From there, the Division took part in several actions, most notably The Battle of Sari Bair between 6-10 August 1915 and the Battle of Russell’s Top on 7 August 1915. The Battalion War Diary for the period from 8 August 1915 shows that they had moved up to positions around Chunuk Bair, in support of the Gloucester’s and the Wellington Battalion. The fighting was ferocious and the diary shows that on that one day, the 8th Battalion suffered 4 Officers and 4 Other ranks killed, 9 Officers and 154 Other Ranks wounded, and 4 Officers and 266 Other Ranks Missing in Action. One of the wounded officers was Captain William John Howells. William was evacuated from Gallipoli, but died of his wounds on 10 August 1915, aged 23, aboard the Hospital Ship HMHS Valdivia. William was buried at sea, so he is commemorated on the Helles memorial, Turkey, on Panel 140-144. William is not commemorated at Red Roses, but is on the Whitland War Memorial. 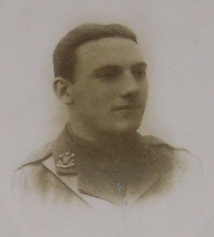 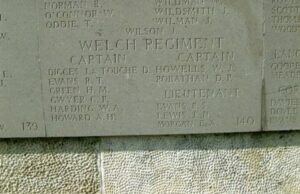 Reginald Allenby Douglas Griffiths, Lance Corporal, 6402909, Royal Sussex Regiment. Reginald was the son of Dan and Margaret Griffiths, of Red Roses. He served in the 4th Battalion, Royal Sussex Regiment. The Battalion was part of the B.E.F. in France at the outbreak of war, and were evacuated from Dunkirk after suffering heavy losses. In May 1942 the Battalion sailed to North Africa, as part of 44th Division, and landed at Suez in July, 1942, joining the 8th Army. They fought the Afrika Corps at Alan El Haifa, then joined the 10th Armoured Division. The Battle of El Alamein started on 23 October 1942, and four days later the 4th Sussex were ordered to capture Woodcock. They successfully advanced two miles into the German lines, suffering heavy casualties, one of which was Reginald, who was killed in action on 27 October 1942, aged 24. He is buried at El Alamein War Cemetery.

Stanley Lewis Morgan, Leading Stoker, D/K65937, Royal Navy. Stanley was the son of William and Elizabeth Morgan, of Union Cottage, Narberth. He married Dorothy Sarah Thomas, of Marros in 1929. Stanley was a pre-war regular in the Royal Navy, serving aboard H.M.S. Exeter, a York Class Heavy Cruiser, which formed part of the South American Division during WW2, taking part in the Battle of the River Plate. During the Battle, she lost 61 crew killed, and a further 23 wounded. After withdrawing to Port Stanley for temporary repairs, Exeter made for Devonport, where she was refitted. She returned to service in 1941, taking part in the Bismark episode before being posted to the ABDACOM Naval force in the Pacific, due to Japans entry into the war. The brief of ABDACOM was to protect the Dutch East Indies (now Indonesia), and it was here on 27 February 1942 that the Exeter took part in the Battle of the Java Sea, where she suffered a direct hit in the boiler room. Whilst attempting to withdraw to Surabaya, the Exeter was attacked again, finally being sunk by a torpedo on 1 March 1942. Stanley died on 27 February 1942, aged 35, and is buried at Jakarta War Cemetery, in Grave 5.K.5. It is unknown whether he died of wounds suffered during the initial battle, or was already in Jakarta, suffering from illness. 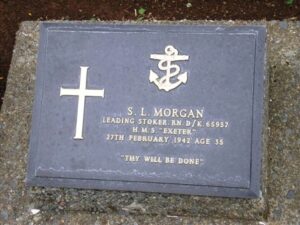 James Edward O’Brien, Sapper, 4208432, Royal Engineers. Jimmy, as he was known, was the son of Patrick and Fanny O’Brien, of Delphin, Cyffig. He served as Sapper in 1024 Docks Operating Company, Royal Engineers. The men of the Company consisted of the various trades required to operate a dockyard, crane drivers, forklift drivers, engine drivers and so on. Jimmy was possibly an engine driver with the GWR, which led to his being called up into the Royal Engineers, and he served with them in North Africa, but sadly died in Tunisia on 4 August 1943, aged 20. He is remembered on the Medjez-el-Bab Memorial, 60 km west of Tunis. Jimmy is commemorated on both the Red Roses and the Whitland War Memorials.

Leslie George Islwyn Owen, Sergeant (Observer), 1288474, Royal Air Force Volunteer Reserve. Leslie was the son of Hugh Vaughan Owen and Rowena Lilian Owen, of Red Roses, Whitland. He served as Sergeant, number 1288474, with the Royal Air Force Volunteer Reserve, in 148 Squadron. The Squadron was formed at Scampton as a long range medium bomber unit in 1937. By March, 1939 the Squadron were armed with Vickers Wellingtons, and moved to R.A.F. Harwell, then moved to Malta in December, 1940 from where it flew valuable bombing raids over North Africa. Leslie was killed on 8 July 1942 aged 25 and is buried at Fayid War Cemetery in a joint grave, along with his crew mates. Leslie is commemorated on the Red Roses War Memorial. 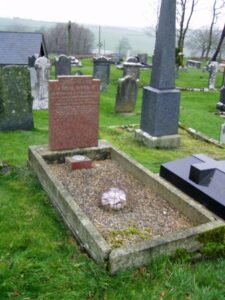