Pontgarreg Chapel lies about three miles southwest of Newcastle Emlyn, in a remote position overlooking the valley of the River Cych, a small tributary of the River Teifi. The chapel is about a mile northwest of Capel Iwan. Inside the Chapel is a single marble war memorial which commemorates the one member of the Chapel who fell during World War Two. The photograph of the memorial is courtesy of Raymond Jones. 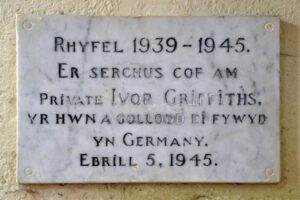 Enoch David Ivor Griffiths, Signalman, 2331782, Royal Corps Of Signals. Enoch was born in 1917, the son of John and Rosamund Griffiths, of Cenarth. He served with the 11th Armoured Division Signals. The 11th Armoured Division, was formed in 1941, and landed at Juno Beach on 13 June 1944. The Division then took part in the break-out from Normandy, and in the drive to Amiens, before heading northwards through France and Belgium into Holland and Germany, taking part in Operation Market Garden, he Battle of the Bulge, and Operation Varsity. Enoch was killed during heavy fighting to capture the villages of Brochterbeck and Tecklenberg on 5 April 1945. He was 27 years old, and is buried in Hanover War Cemetery, Germany. He is also commemorated on the Cenarth War Memorial. 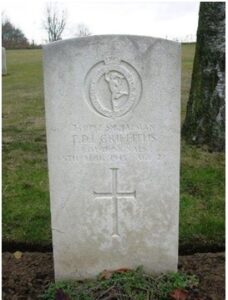 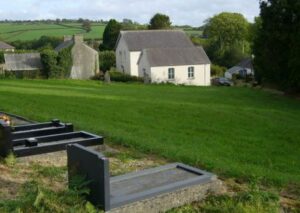