Pentrecagal is a small village situated south of the River Teifi along the A484 main road between Carmarthen and Newcastle Emlyn, about two and a half miles east of Newcastle Emlyn. Within the village is the small Pentrecagal Chapel, which contains a war memorial to the one man of the village who fell during the Great War. The photograph of the memorial has been kindly supplied by Ray Jones. 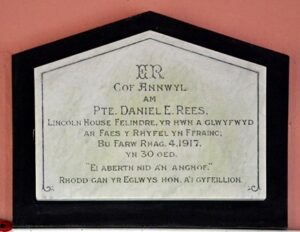 Daniel Evan Rees, Private, 28724, Somerset Light Infantry. Daniel was the son of Thomas and Sarah Rees, of Pleasant View, Velindre. He married Martha Rees, of Rhydhalen, Pentrecagal in 1913 and the couple lived at Lincoln House, Velindre. Daniel was a Tailor prior to enlisting at Newport, Monmouthshire into the Monmouthshire Regiment, but was later posted to the 1st Battalion, Somerset Light Infantry. The battalion had been in France since the outbreak of war, attached to 11 Brigade, 4th Division. The Division had taken part in all of the major actions of the war, and moved to the Arras sector after taking a part in Third Ypres. Daniel was wounded during the time of the Battle of Cambrai, and died on 4 December 1917, aged 29. He was buried at Duisans British Cemetery, Etrun, France. Daniel is also commemorated on the Drefach Velindre memorial. 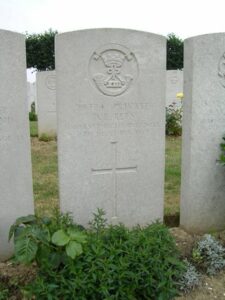